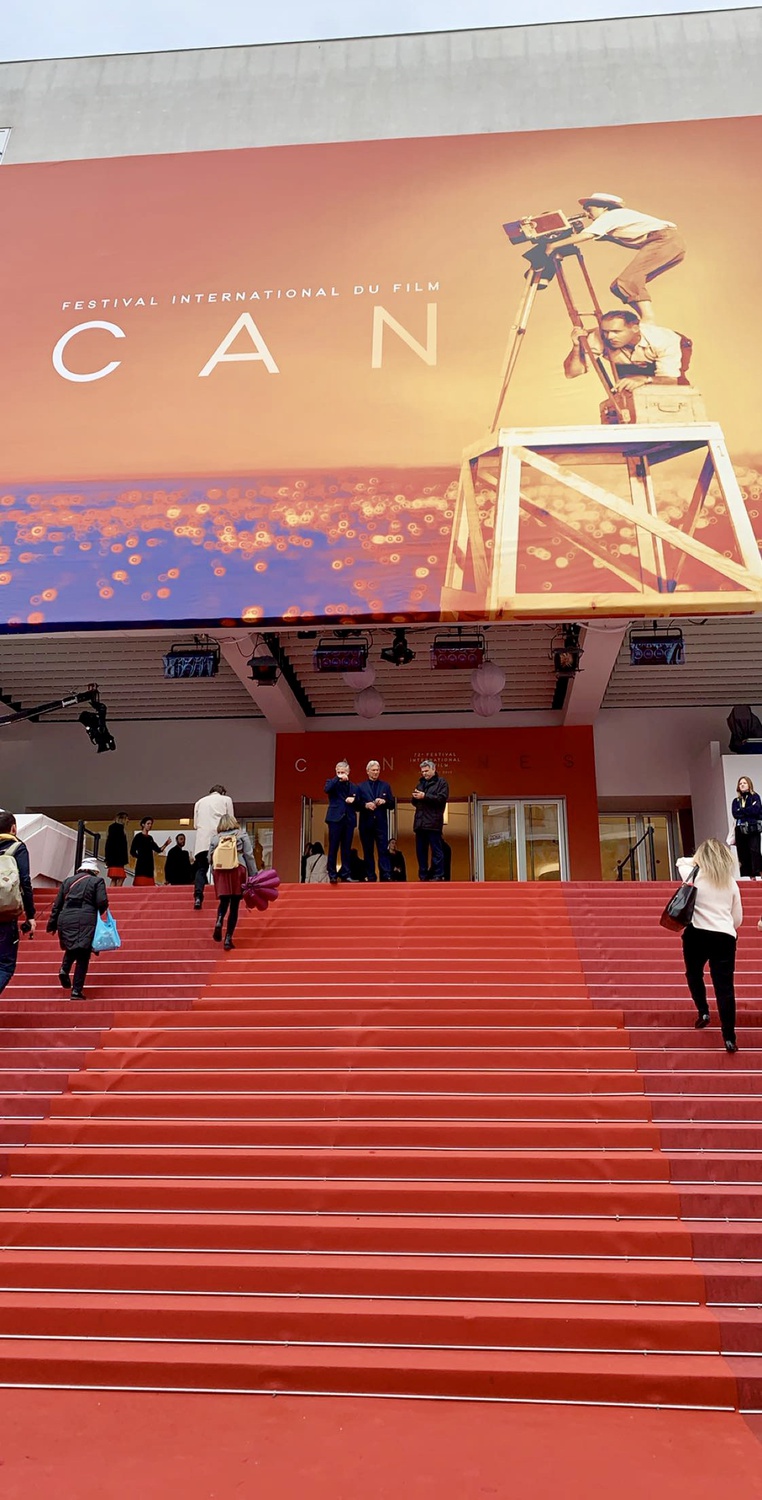 The red carpet staircase leading up to Grand Theatre Lumière, the largest and most glamorous theater at Cannes where Competition films officially premiere, usually with the crew and cast in attendance. By Lucy Wang
By Lucy Wang, Crimson Staff Writer

I make the mistake of telling myself that maybe I’d be up for an 8:30 a.m. screening again. That does not happen. Instead, I get to do my first interview at the festival with Chinese director Tian Zhuangzhuang, who’s presenting his 1986 film “The Horse Thief” as part of this year’s Cannes Classics collection. While walking around the fifth floor of the Palais, where the interview is supposed to take place, I meet two friendly journalists from Spain who are also there or the interview, and just as lost as I am. After finding the room at last, we get down to business. The director is lovely, and the half hour passes by quickly.

I scurry to my first screening of the day, which happens to be a Chinese film too. It's a premiere of drector Diao Yinan’s “Nan Fang Che Zhan De Ju Hui” (“Wild Goose Lake”) in the Grand Theatre Lumière: the largest and most glamorous theater at Cannes, and where the Competition films officially premiere, usually with the crew and cast in attendance. It’s my first time stepping inside the theater here, since there are usually press screenings happening at the same time in other theaters that are half the hassle of getting in, but I decide that I need to attend a screening at the Lumière at least once. I’m neither an A-Lister nor involved the film nor do I write for Hollywood Reporter — you get the point — so I get rounded up in a large mass to the less desirable balcony section.

As I’m scrolling through #Cannes2019 Tweets and the hot takes of the day in my seat, I suddenly hear cheers and the crowd erupt into clapping. I look up, but see that everyone in the row in front of me is already standing. Slightly annoyed, I stand up too, and do a complete double take when I see Quentin Tarantino with his wife in arm walk through the aisle on the main floor of the theater. Though I wished I was sitting down below earlier, I was now enjoying a nice birds-eye view of Tarantino, reminding me of my excitment to see his new film, “Once Upon a Time...In Hollywood,” which is also premiering at Cannes. Just a few more days!

It’s raining, and after watching someone get killed gruesomely with an umbrella in “Wild Goose Lake,” I felt a bit claustrophobic walking outside into a mass of opening umbrellas. Maybe the week is wearing me down, but as I weave through the glamorous stars walking the red carpet, their umbrellas create impenetrable bubbles around them, making them seem at once more stylish and untouchable. The cast and crew for “Port Authority,” which I see next, are all at the screening, and one of the dancers from the cast even gets up on stage and vogues for a bit as the credits start rolling when the film ends. The music and dancing pumps me up, reboosting my energy at the end of a long day.

I grab what I thought to be Greek yogurt at a corner store before heading back to the Airbnb. Upon opening the container, I see a whipped curdle-like, white substance. I look again at the label: “Gervita,” it reads (in my defense, Gervita and Greek start with the same letter, and I was hoping it was some French branding tactic). I do a quick Google search (which, honestly, I should have just done in the store) and realize that what I’ve bought instead is “a delicate cloud of mousse combined with a creamy white cheese.” A mousse of what? I take a spoonful of it. It tastes kind of like yogurt, but much, much richer. Actually, it tastes more like butter than it does yogurt. It’s so rich that I imagine my arteries clogging up. I gulp. But it’s late, I’m hungry, and I still have to wrap up my reviews from the day, so I gobble it down anyways. So much for improving my French.