Working At — But Not For — Harvard

For 14 years, Kara Donohoe worked roughly 21 hours a week as an independently contracted massage therapist at Harvard and never once got to take a paid vacation.

“Christmas time was kind of bittersweet for the massage therapists, when everybody was excited to go home on vacation, we kind of were a little disgruntled because we didn’t get paid,” Donohoe said. “That was kind of a hard pill to swallow.”

As contractors, Donohoe and her fellow massage therapists could not receive many of the benefits afforded to Harvard employees. In 2017, she filed a class action suit against Harvard alleging that her classification as an independent contractor violated Massachusetts labor laws.

The suit was eventually settled, and the University altered its independent contractor policy to better define who qualifies for that designation and who requires direct employment. The massage therapists were hired as employees, finally receiving Harvard benefits.

The new policy, which will go into effect July 1, is not the only labor standard Harvard has updated in the past year to ensure all its workers are treated in accordance with state law and receive benefits comparable to full-time, in-house employees. In March, Harvard revised its policies for contingent workers — which include temporary and less-than-half-time employees — after the University’s largest union discovered that nearly 300 workers in this category worked “excessive” hours without overtime pay.

At the time, Harvard spokesperson Melodie L. Jackson did not challenge the union’s analysis, but wrote in an emailed statement that the University did not believe it was a widespread problem.

Across campus, those who work at Harvard, but are not directly employed full-time by the University fall into a series of groups that are afforded widely different benefits and protections depending on their status. Harvard’s policy changes have benefited many workers, but some contend that inadequate guidelines compromise both workers’ well-being and the beneficiaries of their services.

With a name that rhymes with Harvard’s motto, “Veritas,” the Securitas guards that patrol campus buildings might appear to be an in-house security service owned by the University.

Securitas, however, is a multinational Swedish company with 370,000 employees across the world — and its guards are just some of the tens of thousands of contracted workers across the University that are employed by third-party entities.

Often blending in with Harvard-employed workers, some of these individuals work full-time on Harvard’s campus and conduct similar work to direct employees. They are guaranteed the same pay and benefits as equivalent Harvard employees, but some say this is not necessarily their reality.

Contractors have worked on campus for decades. The University stopped hiring in-house security guards, for example, in the wake of a 1992 discrimination lawsuit. Harvard Medical School outsourced most of its custodial staff in 2001.

That year, members of the Progressive Student Labor Movement occupied Massachusetts Hall for three weeks as part of the Harvard Living Wage Campaign, which demanded that the University pay all workers, including temporary and outsourced workers, a living wage. In the wake of the sit-in, the University formed the Committee on Employment and Contracting Policies, eventually resulting in a “Wage and Benefit Parity Policy.”

The parity policy guarantees that contracted employees in security, dining, and custodial services receive wages and benefits “comparable” to in-house employees who perform the same work, according to the version of the policy included in Harvard University Dining Services’ most recent union contract.

“The entire community stood together to demand wage parity for all workers at Harvard, regardless of whether they’re employed directly by the University or by contractors,” she wrote in an emailed statement. “Today, Harvard janitors and security officers enjoy some of the best wages and benefits of workers in their field throughout the Boston area.”

In the past few years, administrators have requested that at least two Securitas guards at Harvard Medical School be transferred without cause, leaving them without work and pay as they awaited reassignments that never materialized. The guards — Arlene Yarde and Susan C. Castignetti — believe they were transferred as retaliation for speaking out against Securitas and requesting time off for medical needs, respectively.

They alleged that Harvard administrators simply went along with Securitas managers’ requests to have them moved.

At the time, Robert A. Dickson, director of campus services at Harvard Medical School, declined to comment, writing in an email that “this is a Securitas employment related matter.”

After two years in limbo picking up isolated shifts, Yarde was finally given a full-time shift that worked with her schedule in March. Castignetti resigned May 8, which she called a “direct result” of financial problems resulting from loss of wages.

Securitas did not respond to multiple requests for comment for this story.

Several contracted custodians also said they do not believe they are treated equally to their in-house counterparts.

Doris Landaverde, a Harvard-employed custodian who works closely with contracted custodians, said the treatment of the two groups is “totally different.”

She said Harvard helps its custodians purchase public transit passes, but contracted workers do not receive any assistance. Contractors’ retirement and health insurance plans are also inferior, according to Landaverde.

Rogelio Rubio, who is a contracted custodian at the Business School, confirmed that he receives less comprehensive retirement and health insurance benefits compared to in-house custodians.

Castignetti said she was not allowed to purchase the Harvard Pilgrim insurance plan that Harvard employees are offered, and was instead offered a plan through 32BJ SEIU with higher copayments and more expensive network providers. 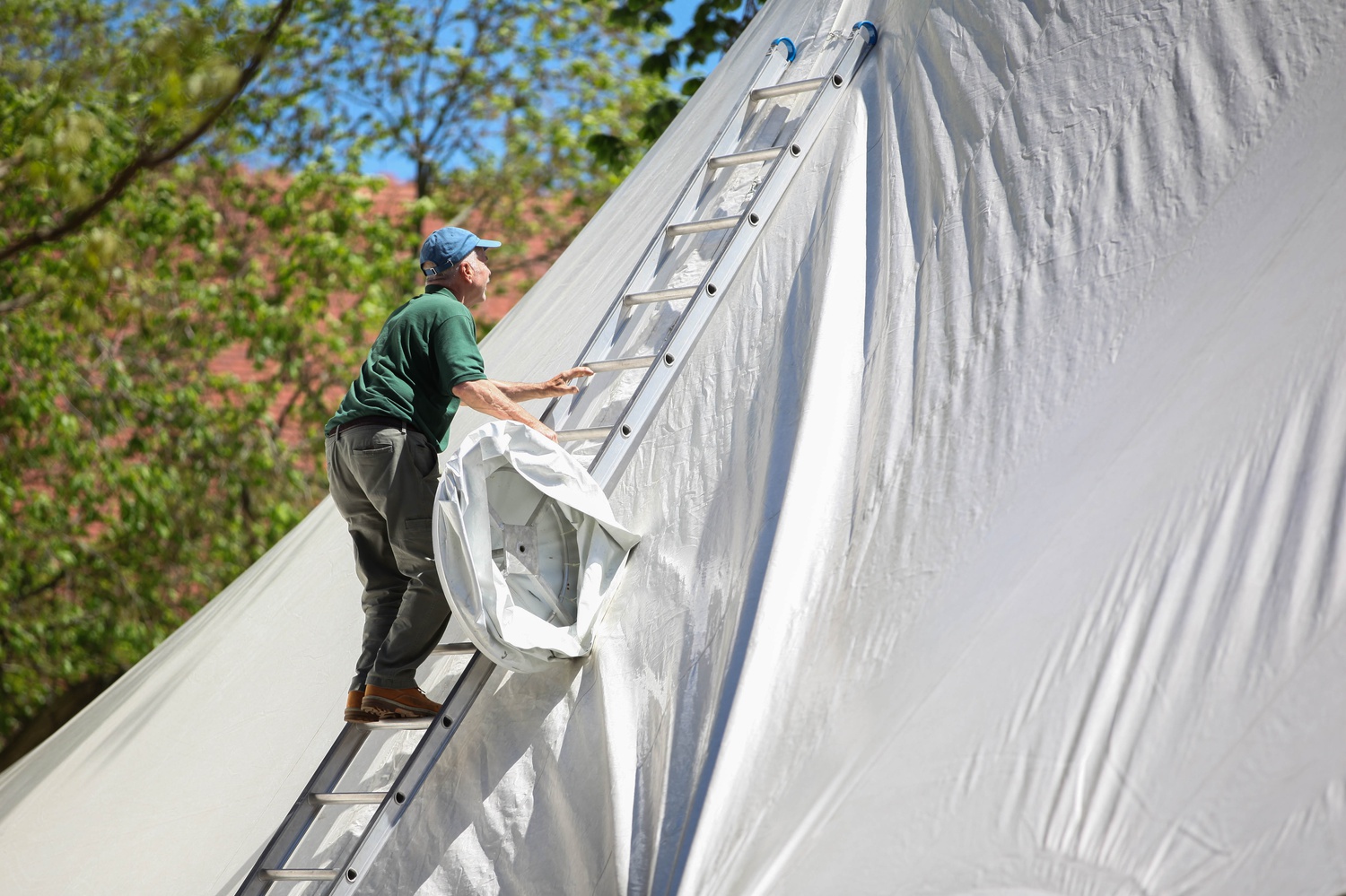 In preparation for Commencement, contracted employees from the William Blanchard Company install a tent in Tercentenary Theatre. By Kai R. McNamee
Advertisement

Before Donohoe, the massage therapist, settled her lawsuit over Harvard’s independent contractor policies, she said she consistently felt “ripped off” by the University.

“I didn’t have any health insurance, I never got vacation, never got sick days,” she said. “I just felt like I was not being treated fairly.”

Following Donohoe’s lawsuit, Harvard revised its independent contractor policy to adhere not only to federal law, but also state law.

“The federal law is looser than the Massachusetts law,” said Shannon E. Liss-Riordan ’90, Donohoe’s attorney and a former Crimson editor.

Massachusetts laws are “among the most restrictive” nationwide, according to the training presentation.

Swain wrote in an emailed statement that the new policy ensures Harvard is compliant with state law.

“The University has had a policy on independent contractor classification for many years and has revised it on several occasions,” Swain wrote. “The most recent revision, which will be effective July 1, is intended to provide guidance on and clarify the Massachusetts state law requirements for contractors.”

Under the new classification policy, massage therapists like Donohoe at Harvard’s Center for Healing and Wellness Promotion must be hired as Harvard staff and become members of Harvard Union of Clerical and Technical Workers.

Three therapists took benefited positions working half-time at Harvard, but the equivalent of full time in the industry, according to Donohoe and other massage therapists. Others were converted to less-than-half-time staff without benefits, according to Suzanne Choquette, a therapist who has worked at the center since 2007.

Donohoe, who holds a benefited position, said she has been “pretty happy” with her new classification.

“It’s the first time in my 15 years at Harvard that we got paid during winter break, which was really exciting,” she said. “And then I recently just had a paid vacation.”

Even though her wages fell more than 40 percent she said the new benefits made up for lost wages.

Choquette, on the other hand, was less enthusiastic about the lawsuit outcome. She chose to become a less-than-half-time employee because she didn’t want her wages to drop as far as benefited employees’ wages fell.

“The good thing is that if we didn’t want to work, we didn’t have to,” she said.

Last year she decided she wanted to work 20 hours at Harvard, but discovered that as a less-than-half-time worker, she was capped at 17.5 hours each week. In March, this dropped to 14 hours per week, a limit implemented with a recently negotiated HUCTW contract.

“It’s a 50-50 thing...It’s really a personal thing,” Choquette said. “You know, for some people that benefits are better for others, it's not.”

In part because of the new hours restrictions, she will leave Harvard altogether in June.

The policy that capped Choquette’s hours was the result of HUCTW’s effort to provide full staff-level compensation and benefits for contingent workers that are employed for more than three months or more than 14 hours per week.

In early May, HUCTW announced that 42 temporary and less-than-half-time workers had been transitioned to regular staff under the new rules, and more are expected to transition in the coming months.

HUCTW Director Bill Jaeger said that the new rules are an “extension” of the “concerns” that led to Wage and Benefit Parity Policy nearly two decades ago.

“There is a thread that runs from then until now,” he said. “We don’t want pay and benefit levels to be getting degraded.”

Swain wrote in an emailed statement that the University’s policies ensure fair compensation for contracted workers.

“The University’s Wage Benefits Parity Policy is specifically designed to ensure that the employees of our service vendors receive compensation packages comparable to those provided to Harvard employees,” Swain wrote. 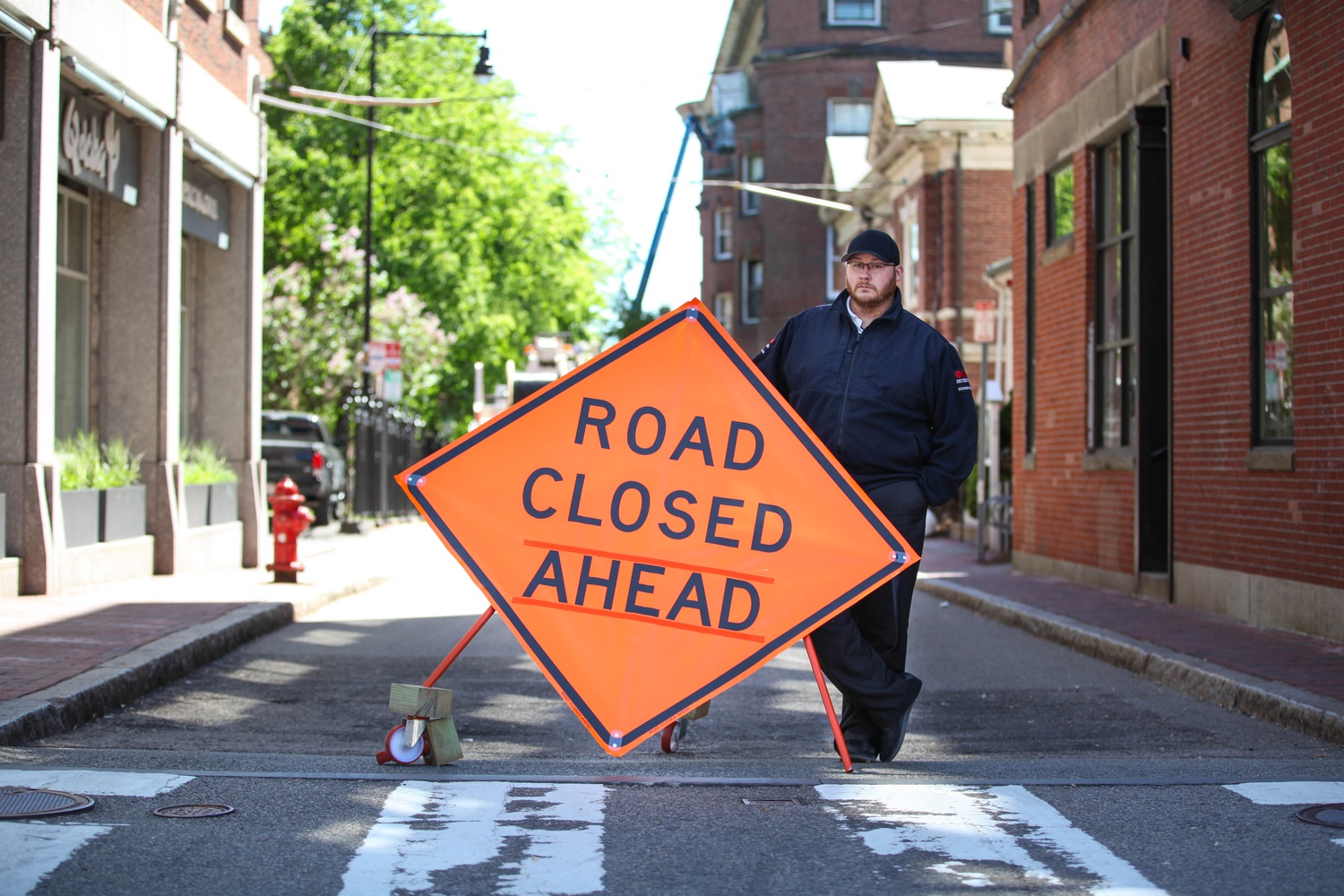 Harvard policies for contracted and contingent workers, however, do not just impact those individuals. In some cases, workers said that temporary workers were not adequately screened for their roles, or that changing employment status impacted their services to clients.

Choquette, the departing massage therapist, said being an independent contractor allowed her to manage her schedule in a way that better served her clients.

“I’d like to have 10 minutes in between, to not rush between the clients, and give them more time on the table,” Choquette said of her old schedule that use to allow more time between clients.

In Harvard’s dining halls, though, policies governing employment status can be more than just a matter of convenience.

Kerry Maiato, a HUDS worker and UNITE HERE! Local 26 chief shop steward, said that temporary workers frequently staff Annenberg Hall — where he works — when employees call in sick or if they need “another set of hands” to prepare dishes.

Maiato said that the “majority of the time,” temporary workers come in without the proper training for the role they are supposed to fill.

“We've had a lot of issues with them in the past, safety wise, towards either prepping food, or just walking into the dish room with safety precautions about dirty dishes, or some individuals had intoxication — you can smell, you know, alcohol on them,” Maiato said.

Maiato said he has seen temporary workers hired as cooks, but it is sometimes obvious that someone hired through a staffing agency “isn’t a cook,” at least by professional standards.

HUDS spokesperson Crista Martin wrote in an emailed statement that HUDS will only call in temporary workers from “several specialty foodservice temporary agencies” if no HUDS worker can fill in on an open shift.

“Those employees are vetted by the temporary agency, but must meet certain criteria as part of a contract with Harvard,” Martin wrote. “If a ‘temp’ comes to our operations and cannot perform the functions of the job, or does not meet our criteria for safety or health, they are dismissed and their eligibilty [sic] for future opportunities at Harvard is removed.”

Laquiesha N. Rainey, a staff cook in Annenberg, said that when HUDS cooks are hired, they are tested to make sure they can do the job properly and safely.

“But temps, they’re not given that kind of test, they’re just called in,” Rainey said. “We have to give them specific instruction and make sure that we’re monitoring them so that they are not making errors or making anybody sick.”