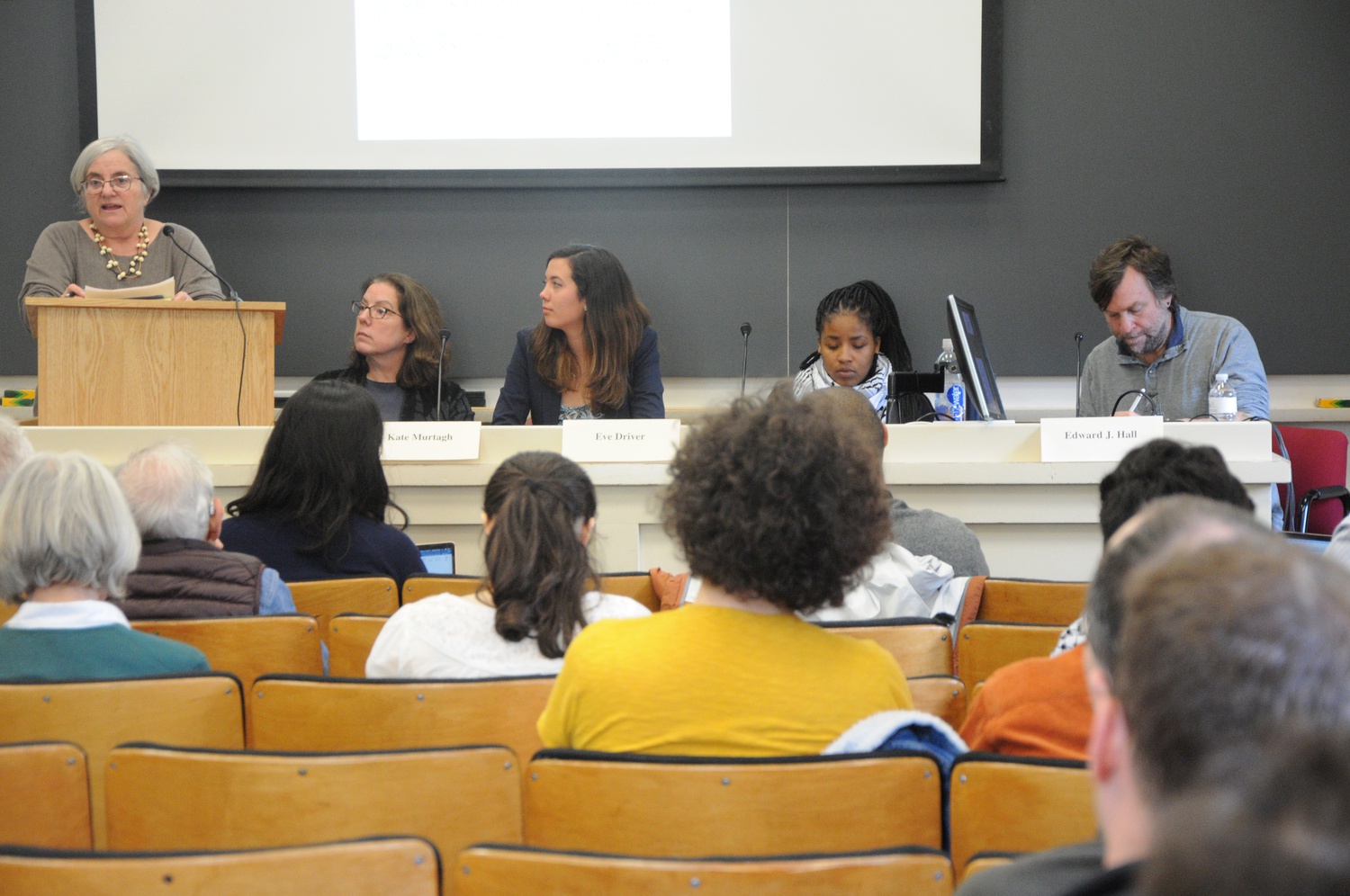 A panel on divestment, which included a Harvard Management Company executive, discussed divestment and compliance. By Mia B. Frothingham
By Alexandra A. Chaidez, Crimson Staff Writer

Harvard Management Company Chief Compliance Officer Kathryn I. Murtagh spoke about Harvard's investment policies Monday at a panel that also featured students and faculty calling for the University to divest from companies with ties to the prison and fossil fuel industry.

Activists from Divest Harvard and the Harvard Prison Divestment Campaign — groups opposed to fossil fuel investments and prison system investments respectively — participated alongside Murtagh in the event, which was billed as a debate. Executives from HMC, the University’s investment arm which manages Harvard’s $39.2 billion endowment, rarely make appearances on campus.

At Monday’s discussion, Murtagh — who manages sustainable investments for HMC — defended Harvard’s decision to maintain its status as a shareholder and “active owner” of a variety of assets. She said that being a shareholder provides the opportunity for investors like Harvard to engage in “formal dialogue” with companies’ management about sustainability issues.

“Active ownership, engagement, advocacy, stewardship — these are all tools that institutional investors can leverage to drive corporate change,” Murtagh said.

Murtagh said that since the working group’s inception in 2017, Exxon Mobil has publicly supported the need for strong methane policy in formal comments to the Environmental Protection Agency in 2018.

“Stewardship engagement work[s],” Murtagh said. “It does, but it takes patience and it takes time.”

University President Lawrence S. Bacow has maintained the University’s long-standing position against divestment. He has repeatedly said the endowment should not be used as a mechanism for social change and that the University, rather than divesting, should engage with the fossil fuel and prison industries through its scholarship and shareholder status.

Representatives from Divest Harvard and HPDC reiterated many of their demands Monday and called on Murtagh to directly respond to their concerns about Harvard’s investment policies.

"Harvard's shareholder status means that it wants to see these fossil fuel companies continue to profit,” Driver said. “Doesn't this radically constrain capacity to ever push these companies to prioritize a shift toward renewable energy over profit?”

HPDC organizer and Law School and Business School student Amber A. James ’11 called Harvard an institutional investor that profits from the injustices of the prison industry, including poor healthcare, high commissary prices, and expensive telephone calls.

“To be clear, in case you haven’t picked it up from my comments thus far, there is no way to invest responsibly in companies that profit from human caging,” James said.

In response, University spokesperson Jonathan L. Swain said Bacow has offered to organize a meeting between the Corporation Committee on Shareholder Responsibility and the Harvard Prison Divestment Campaign — an invitation to which he said HPDC has not responded.

When asked to respond to activists’ comments, Murtagh referred to the Corporation’s jurisdiction to make investment policy. The CCSR is comprised of members of the Harvard Corporation, the University’s highest governing body that sets investment policies.

“I think it might be an important comment to know is that the University does reserve the right to divest, the decision to divest lies with the Corporation,” Murtagh said. “It doesn't lie with the Harvard Management Company. What the Harvard Management Company is charged with is being an active owner and a good steward to the investments that we do have in the portfolio.”