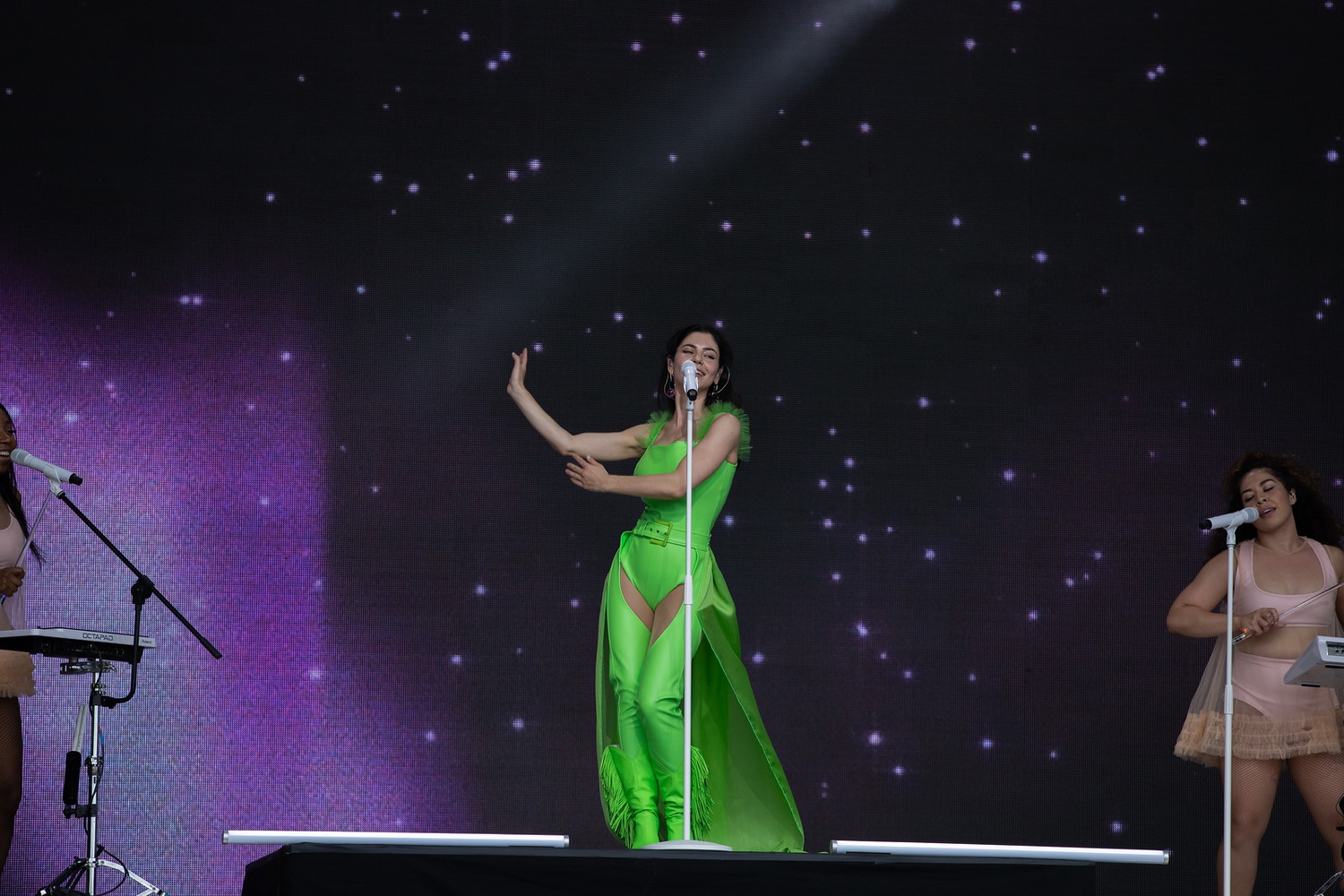 Ravyn Lenae put on an empowering performance that showcased her impeccable voice, incredibly high-reaching range, and delicate vibrato. Her red braids and sundress complemented the pink and red stage graphics,. Her body language channelled the same energy: peppy leg kicks, hair tosses, and swaying hips. She interspersed dialogue between all of her songs, once asking the audience to hold out their pinkies in the air and promise to move to the music and other times telling to raise their hands if they’ve ever fallen in love over the internet or been in a long-distance relationship. A personable, charismatic personality, she was conversational, and her message, for every woman and member of the audience to feel themselves, felt like a personal note to each individual. She shouted out black women and their edges before singing “The Night Song,” “black girl sauce” before singing “Spice,” and the duo who she says influenced her entire musical career, Outkast, before singing a cover of “Prototype.” Her songs ranged from heavy, upbeat rock to smooth, soft R&B. Backed by two guitarists and a drummer, her flawless voice gave the performance everything it needed.

SOB x RBE, a trap/hip-hop group comprised of four members, began their performance strongly. DJ Xslapz played recent and classic hits from Lil Nas X’s “Old Town Road” to Blueface’s “Thotiana” to Miley Cyrus’ “Party in the USA,” creating the mosh pit the three SOB x RBE rappers sustained when they mounted the stage. The DJ’s variations on the original songs were minor, only entertaining the crowd with occasional dialogue, which worked well with the hyped crowd. Much of the group’s music was tonally homogeneous, but it worked in the favor of the band. The crowd danced to the intense, beat-heavy music despite its lack of variation — their performance was predictable, but it was nonetheless a crowd-pleaser. They repeatedly paced the length of stage, singing into the microphone with one arm and gesturing ahead with the other to the pace of their rap. The background display had their SOB x RBE logo written inside continuously unfurling flames, and never changed from that. SOB x RBE put on a lively and smooth performance whose only flaw was that it could be more varied, and thereby more exciting and original.

Pop music artist MARINA, formerly known by the stage name Marina and the Diamonds, put on a mixed performance. She had an at-times cringeworthy stage presence, promoting her gig in September while she often paused to wait for audience members to cheer her on, telling one individual in the audience that she loved them too, and saying into her microphone to her background singers that she could not wait to drink cool champagne with them. It seemed performative and disingenuous, though not out of the ordinary relative to other artists. Her background singers were clad in pink while she wore a fitted bright green one-piece suit with a cape, keeping with her tradition of extravagant, unconventional costumes. Their choreography largely stayed the same throughout the show, with all of them swaying in place, raising their arms gracefully, and jutting out their hips in a simple routine. They occasionally descended the podium and contorted their bodies, and then would remount and return to the routine. They repeated variations of it so many times throughout the show that the dancing became distracting more than enhancive, including when they added silver pom-poms to the cheerleading-style choreography. Hits like “Primadonna” and Clean Bandit’s “Baby,” on which she is featured, were exciting to see performed live, but the highly edited, quickly changing nature imagery on the background display made little sense with her costume, dance, and overall stage. MARINA’s live singing itself was faultless and rich with personality, though much of her showmanship was either bizarre or underwhelming.

Joshua Karpeh, known to the music world as Cautious Clay, is new to the music scene. Karpeh got his start making beats and remixes on SoundCloud — including a remix of Billie Eilish’s “Ocean Eyes” before she made it big — before transitioning into making his own music. He first played in Boston at Great Scott in Allston a year ago, and that was only his third live performance. The Brooklyn-based multi-instrumentalist delivered a wide-ranging set spanning his three released EPs and some tantalizing unreleased material. At times, Karpeh relied on his voice alone, at others he played the saxophone and flute. He delivered his lyrics with a cool and calm cadence that created a chill atmosphere surrounding his stage. The front of the crowd, though, became fully immersed in the set, cheering loudly and dancing vigorously. Kareph seemed to feed off this energy, seemingly rewarding the audience with two unreleased tracks, including one co-written with John Mayer. He finished his set with “Cold War,” his most popular song that appeared in an episode of HBO’s “Insecure.” With lines like “‘Cause you only swipe right if you f**k for follows / Welcome to the days of the broke and shallow,” the song deals with modern romance and the superficiality that often comes with dating. Kareph ended the song with an extended saxophone solo before his band joined in for a triumphant display of instrumental talent. Fittingly, Kareph proclaims that “we’ll always be the one tough act to follow” in “Cold War,” which perfectly encapsulates his stellar performance.