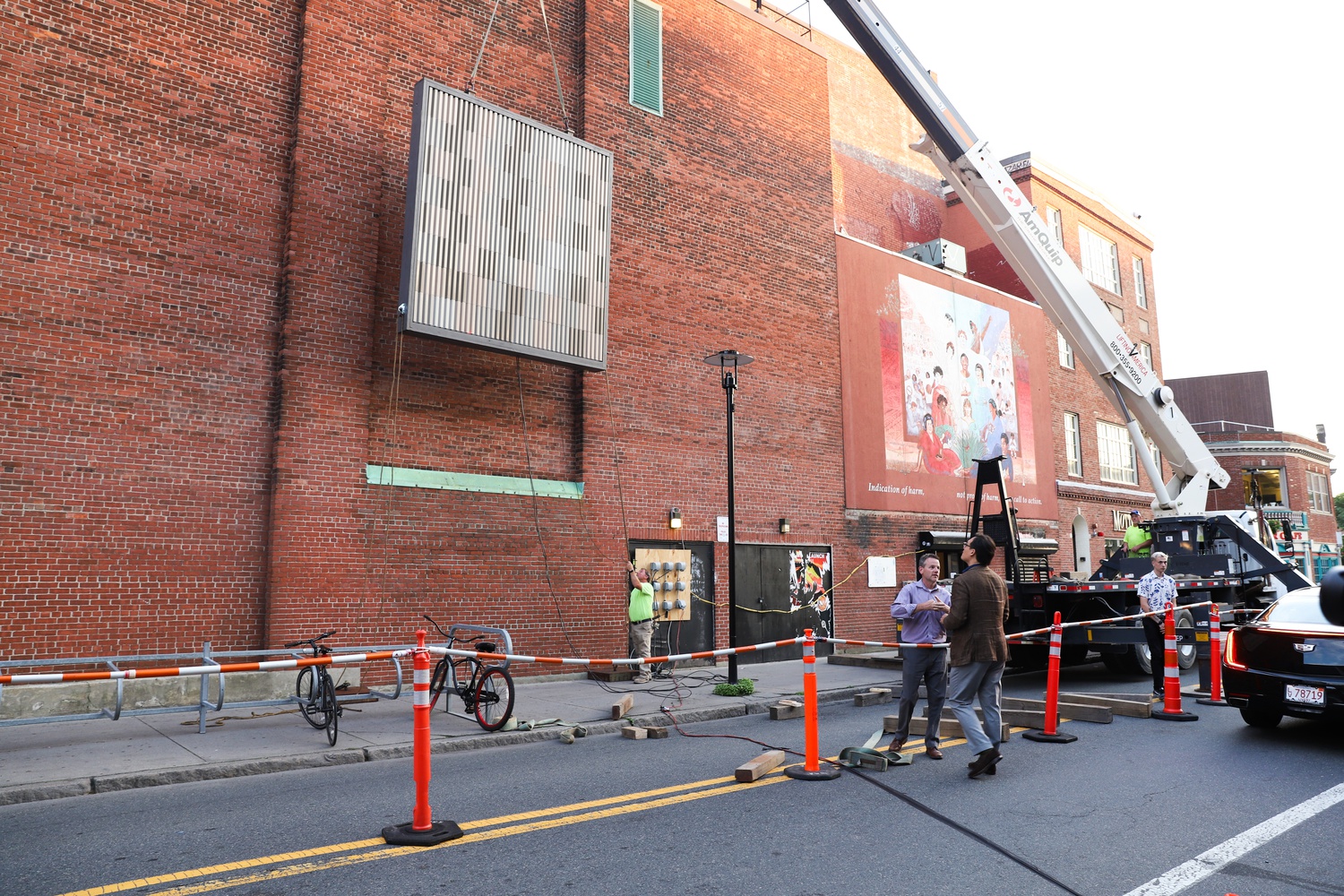 The Harvard Square rebuilding project's team conducted the presentation using a large square panel made of terracotta tiles as a sample of the proposed façade. By Amanda Y. Su
By Amanda Y. Su, Crimson Staff Writer

About 40 local residents, including several members of the Cambridge Historical Commission, gathered for a public presentation of a Harvard billionaire’s plan to rebuild the Harvard Square Theater at the planned construction site Thursday evening.

Billionaire and top-tier Harvard donor Gerald L. Chan purchased the theater located on 10 Church St. — which has been vacant since its 2012 closure — in 2015. In 2017, Chan officially announced his plans to demolish the existing theater and construct a new mixed-use building, adding 14 feet of height and establishing a large LED-dotted facade for outside art displays.

Since its unveiling, Chan’s plan has been a subject of controversy among Cambridge residents. In September, the Cambridge Historical Commission postponed granting a certificate of “appropriateness” to the plans, citing concerns over the new building’s size and the lighting of the large, external video screen. 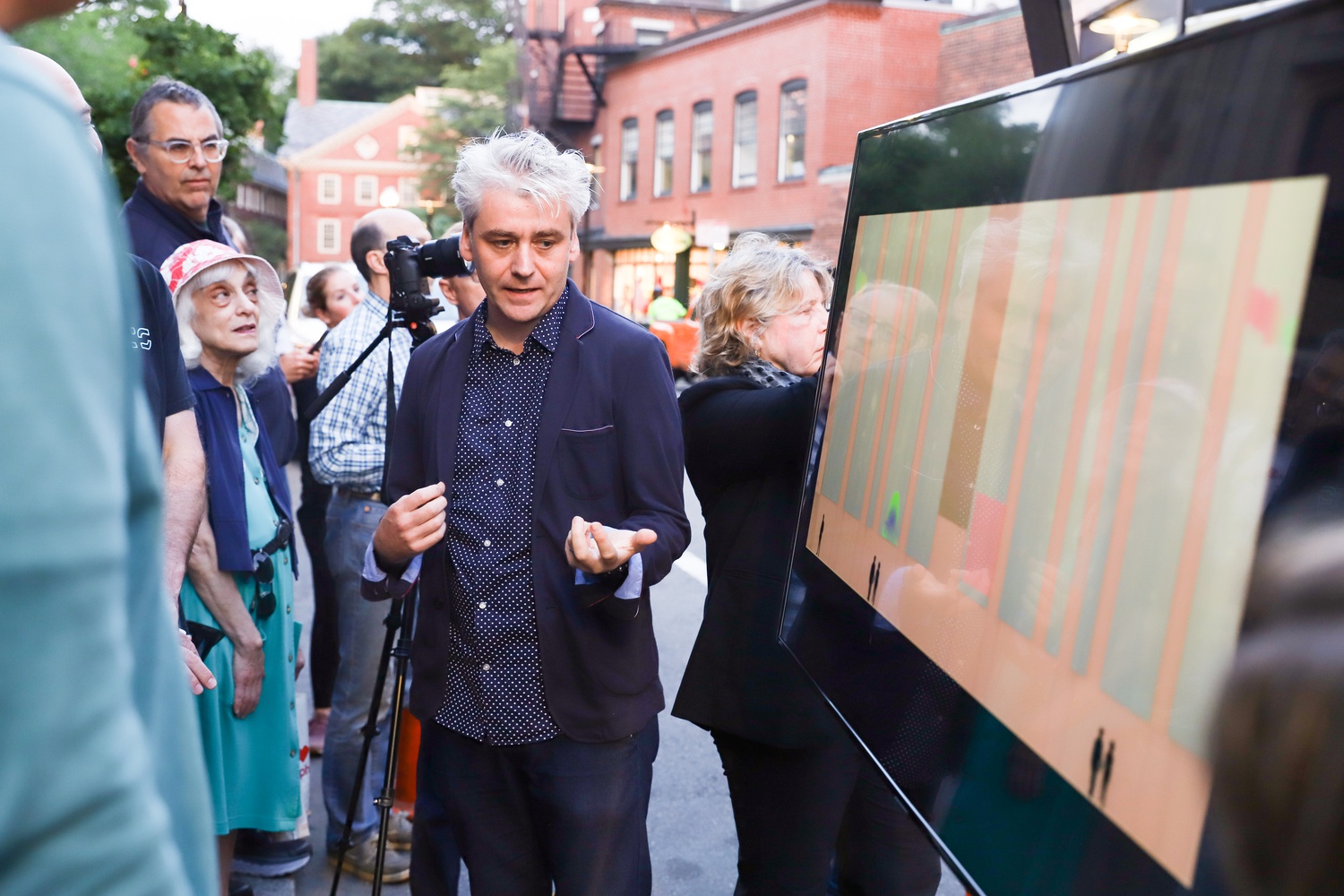 After the presentation — during which three members of Chan’s team showed the audience how the lights would operate and addressed previously aired concerns — the commission voted to hold another public hearing on the plans for the theater in the coming months.

Chan’s project manager Nathan Wong, project engineer Valentin Spiess, and Chan’s lawyer Anthony D. Galluccio conducted the demonstration using a large square panel made of terracotta tiles as a sample of the proposed façade. They showed the audience what the “expressive facade” would look like in different lighting situations: daytime, dusk, evening, and night.

“Every night-evening setting is intended to be no different than any other building, meaning that there's a soft glow of radiant light just washing the wall,” Wong said. 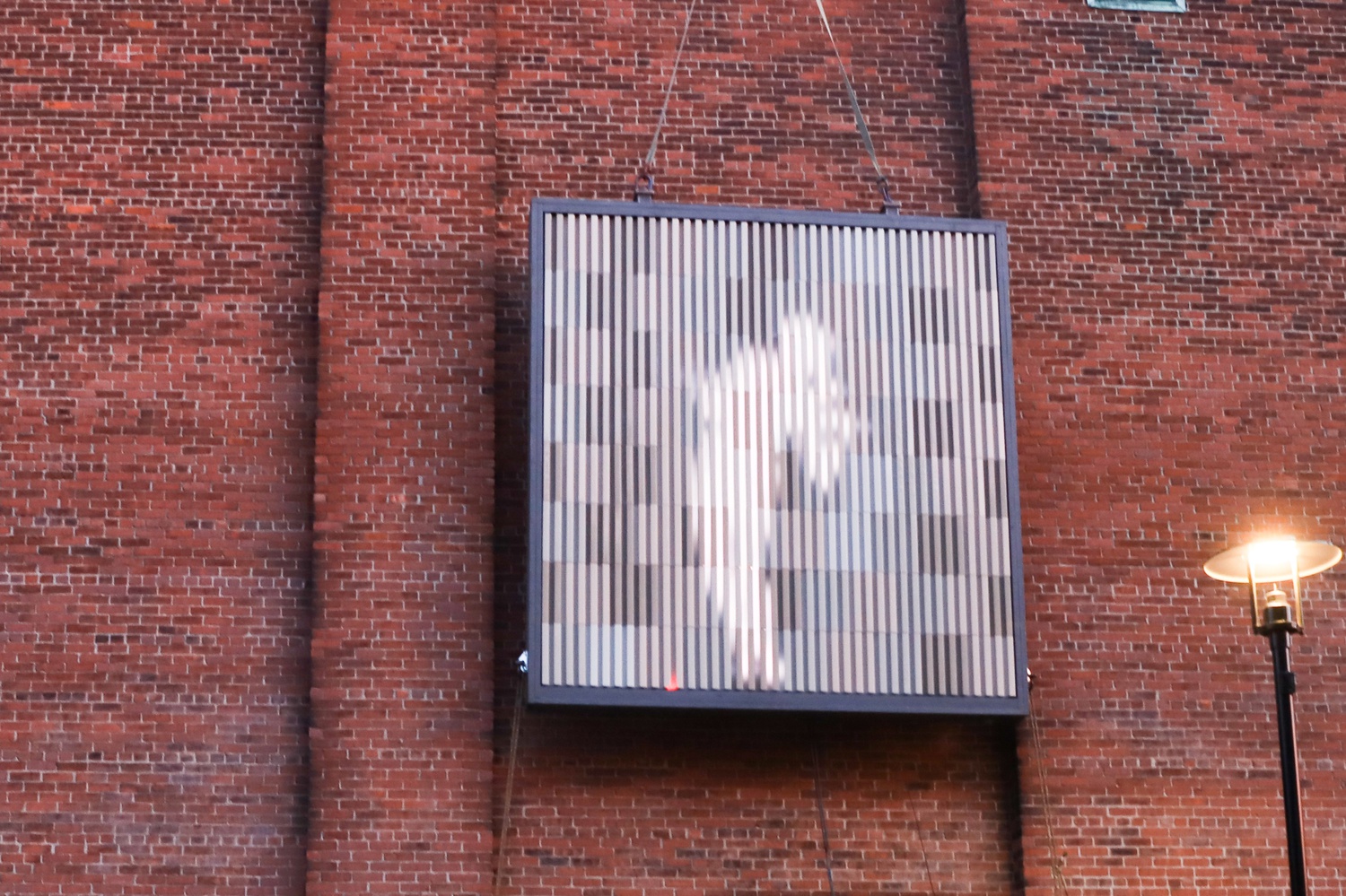 The project's team said cameras and sensors could detect kinetic movements of people in front of the building to display their silhouettes on the new building's facade. By Amanda Y. Su

During the presentation, Wong clarified that the lighting would be “dim,” “nuanced,” and “subtle.” Galluccio said the team wanted to alleviate concerns from Cambridge locals that the display could be gaudy or “Las Vegas”-style.

Spiess demonstrated examples of possible animations on the facade, including an aquarium of moving animals and growing trees. Spiess also showed how cameras and sensors could detect kinetic movements of people in front of the building to display their silhouettes.

During the presentation, several audience members questioned the sustainability and energy usage of the LED panels. Spiess said he projects that if the lights ran 14 hours a day, which he said is more than expected, the energy could be produced by solar panels on the roof of the building.

Charles M. Sullivan, the executive director of the Cambridge Historical Commission, said he found it “gratifying” to finally see a demonstration of the facade in an interview Friday.

“I think it was fairly muted and subtle. And I think that probably will help it gain acceptance in Harvard Square,” Sullivan said. “Most of the people I talked to seem to see it pretty favorably.”

He added that the commission will have to make a judgment on whether the facade is “appropriate” for Harvard Square after further discussion.

“There is really not much like this — this specific kind of facade material with embedded LED,” Sullivan said. “This is not something that's been done anywhere in the U.S. that we're aware of.”

He said he appreciates the facade’s “modular” design, which reflects the brick tradition of the existing wall and the terracotta color palette, which he said incorporates the hues and tones already present on Church Street.

Galluccio — a Cambridge local — said though he recognizes that “change scares people,” he is excited to enliven Church Street with the new design.

“To come back with commercial movie theaters, a facade like this, and new retail, I think it could have a significant benefit to new activity on Church Street,” he said.

Chan’s project team will inform the commission when they are prepared for a hearing.

A previous version of this article mispelled Valentin Spiess as "Speiss." The article has been updated with the correct spelling.