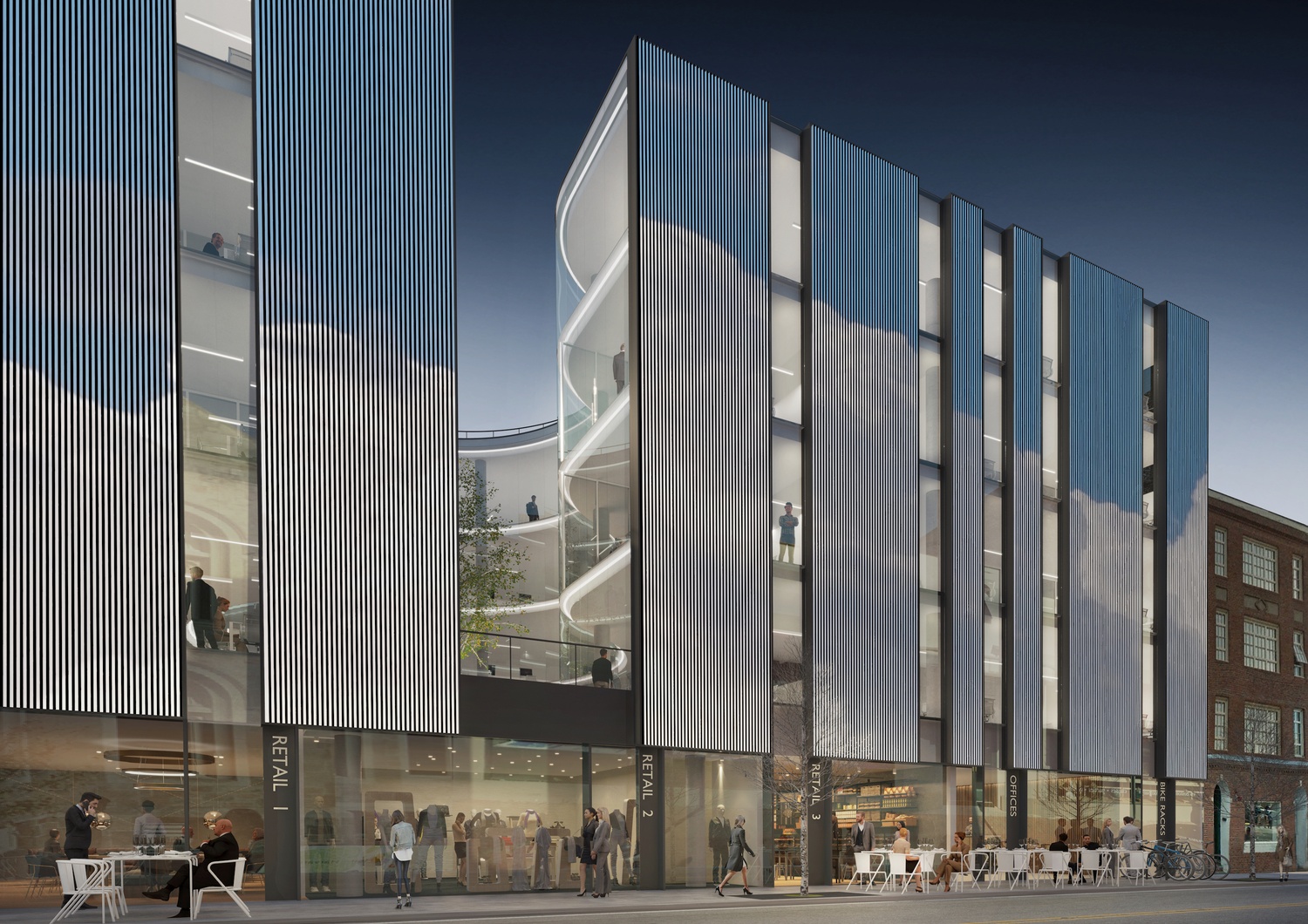 The current plan for the Harvard Square Theater includes the construction of a four story-tall, LED-embedded edifice. By Courtesy of Promontorio and Merge Architects
By Truelian Lee, Crimson Staff Writer

The deserted and dilapidated Harvard Square Theater may soon house office space, several stores, and a new, two-screen theater — all concealed behind an LED-embedded facade capable of displaying art or photography.

Gerald Chan, the developer seeking to revive the Harvard Square Theater announced plans last month to tear down the deserted building to make way for storefronts, a new theater, and a four story-tall, LED-embedded edifice.

Billionaire Gerald L. Chan, the co-founder and leader of the investment firm Morningside Group, bought the property in 2015. The theater, located at 10 Church St., closed down in 2012.

In 2017, the Cambridge City Council gave Chan 30 days to draft initial plans for the site or risk losing ownership of the land. This past spring, the Council called on Chan to publicly release a timeline for his development project.

Chan proposed to construct a five-story building consisting of up to 60,000 sq. ft. and including offices, storefronts, and a two-screen theater.

Portuguese firm Promontorio Architects collaborated with Merge Architects in Boston to design the structure, which features a landscaped courtyard to bring in natural light.

"We are thrilled to be collaborating with Promontorio on the design of this important iconic building for Harvard Square,” Elizabeth Whittaker, Founder and Principal of Merge Architects wrote in an email, “Kirche is committed to developing a project that will bring back the vitality of the previous theater while providing a dynamic facade that will work well at the scale of Church Street." 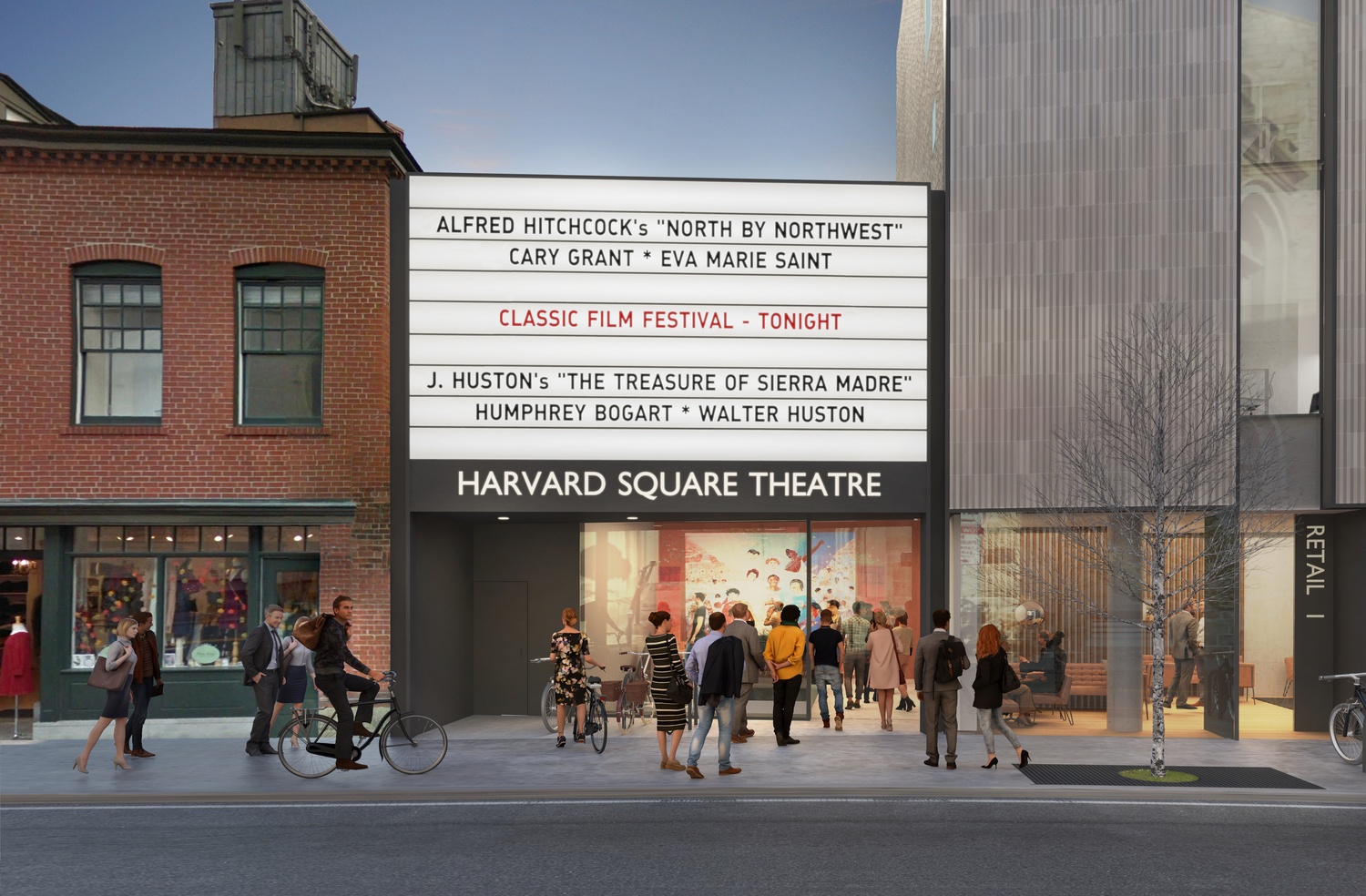 Developers proposed a new Harvard Square Theater facade that would include a dedicated theater marquee that "clearly identifies its presence in the street." By Courtesy of Promontorio and Merge Architects

Paulo Martins-Barata, a partner in Promontorio, wrote in an email that the the designs depict a “world-class” building with a “state-of-the-art” theater.

He stressed the building’s “innovative” art facade, a porcelain ceramic face with LED stripes which can light up to create various works of art or photography.

At the same time, Martins-Barata wrote the new building will “blend-in real fast.”

“This won’t definitively be a glass-box office building in the historically delicate context of Harvard Square,” he wrote. “Ideally, you’d think that this building was always there, even though it's entirely new.”

Jim Wooster, manager of local music club Passim, called the currently abandoned building an “eyesore.” He said he thinks most people in the community are “impressed” with the designs for the new complex.

“They’re not just trying to put up an office building and charge as much rent as they can,” Wooster said. “I think the developers are looking for ways they can be connected to the community, which I think is good and admirable.”

For example, Wooster said, opening retail storefronts nearby could be “a terrific way” to encourage people to explore the around and discover places.

At the same time, Wooster is “concerned” about disruptions to business from construction. He said he looks forward to discussing ways to mitigate disruptions with the developers.

“We’ve had good discussions with the developers already, and I know that they’re concerned about that and trying to make plans that would mitigate too much disruption for us,” he said. “I look forward to just keeping those lines of communication open so that if there are things that come up that we’ll be able to discuss them, and that they’ll be able to take our issues and concerns into consideration.”