Protesters Call for Wheelchair Accessibility in Harvard IT Building 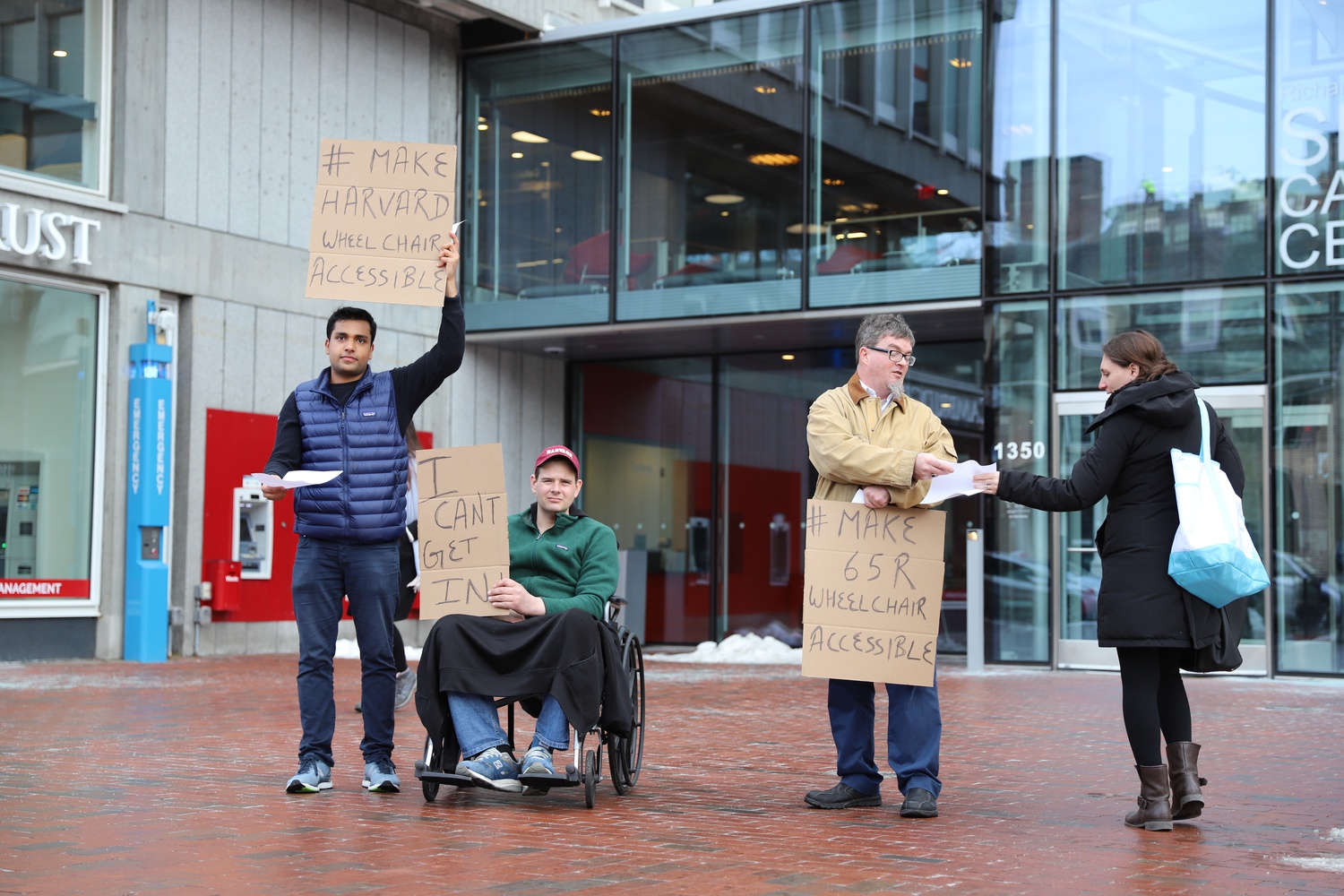 A small group of protesters gathered in Harvard Square Friday afternoon to advocate for wheelchair accessibility in a Harvard University Information Technology building.

Solanki said he chose to resign from his job with HUIT because the University has “no plans” to make the building wheelchair accessible. He said he met with the property manager and building manager multiple times, but they would not add a ramp or elevator to the building.

“It’s just a ramp. It’s not going to take a lot. I don’t know why they’re not doing it,” Solanki said.

HUIT spokesperson Tim Bailey wrote in an email that the office’s locations comply with the Americans with Disabilities Act’s accessibility requirements.

“Harvard University Information Technology (HUIT) is committed to offering an inclusive and accessible workspace for all members of our community,” Bailey wrote.

Solanki said poor upkeep of the building also prompted his resignation, describing the University’s maintenance of the steps as “below average at best.”

“I had multiple injuries on those stairs,” Solanki said. “I had slipped on those stairs. There were many instances where the snow was not even plowed.”

Bailey wrote that Facilities Maintenance Operations — which handles snow removal — lapsed in its duties during the first snowfall of the season due to nearby construction, but that the issue was immediately addressed. FMO addresses grounds and trash pickup on a weekly basis, and staff can enter work orders for additional items that they need FMO to respond to in a timely manner.

The protest was not the first time Harvard has come under fire for failing to accommodate people with disabilities. In December, Harvard resolved to provide closed captioning for its online video and audio content after facing a lawsuit by the National Association for the Deaf.

Amid the the suit, advocates across the University have pushed to destigmatize disabilities and promote equal access. In May, an advocacy group at the Harvard Graduate School of Education called International Higher Education and Disabilities created a new journal detailing people’s experiences with disabilities. In November, disability rights activist Judith E. Heumann spoke at the Harvard Institute of Politics.

At Friday’s protest, demonstrators continued the efforts, holding signs with slogans such as “#MakeHarvardWheelchairAccessible” and distributing flyers to passersby.

Protestor Jackie Bassett said she joined the demonstration because she was “outraged” that Harvard was not providing its students and employees with the “basic minimum need” of accessibility.

“It didn’t seem at all fair,” Bassett said. “This is not a third world country. This is Harvard.”