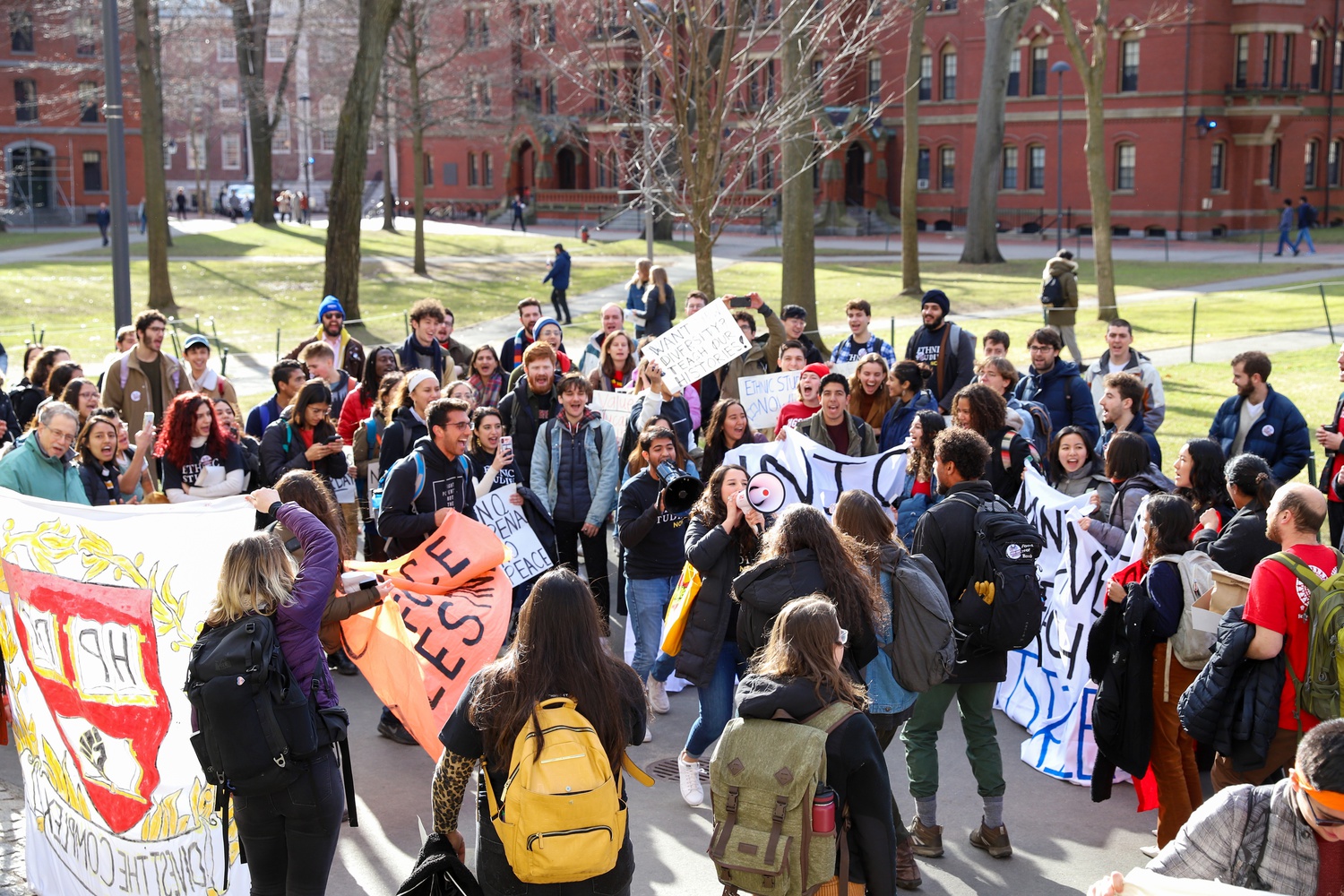 Nine graduate and undergraduate student activist organizations gathered in the lobby of the Science Center to hold a “Reorientation Rally” on Monday, the first day of spring semester classes.

The Reorientation Rally — which took its name from a play on orientation for classes — was organized by Act on a Dream, Divest Harvard, Harvard Ethnic Studies Coalition, Harvard Graduate Student Union-United Automobile Workers, Harvard Prison Divestment Campaign, Harvard ReproJustice Action & Dialogue, Harvard TPS Coalition, Our Harvard Can Do Better, and Harvard Palestine Solidarity Committee. The rally featured speeches from each of the groups.

In a printed statement distributed during the rally, the groups wrote that the rally’s various participants shared a common interest in fighting for social justice on campus.

“Today, we joined together to disrupt business as usual in the Science Center and held a Reorientation Rally,” the statement reads. “We welcomed our community back to the reality of a campus plagued by administrative inertia on many of the most critical issues we face, from denial of rights to Harvard’s student workers and the historical absence of an Ethnic Studies department, to the Harvard Corporation’s continued investment in the fossil fuel and prison industries.”

The statement concludes with a declaration that the groups will continue their activism over the next few weeks.

“There is no time for inaction,” the statement continued. “Today is only the beginning. So, we are calling on every Harvard student, worker, and faculty member to join us in this fight. We cannot win without you.”

Connor Chung ’23 spoke on behalf of Divest Harvard and criticized Harvard Management Company’s decision to invest in avocados and sell other natural resources amid wildfires around the world.

“We’re facing a planet on fire and rather than fight the flames, Harvard spent its winter break investing in avocado monopolies,” Chung said. “Any solutions must recognize that the way we’ve always done things isn’t nearly enough to dismantle this immoral status quo.”

In November, demonstrators from Divest Harvard and Fossil Free Yale occupied the field at halftime of the 136th edition of The Game, demanding that Harvard and Yale divest from the fossil fuel industry and from Puerto Rican debt.

University spokesperson Jason A. Newton, referring to a previous statement, wrote that the University agrees with the urgency of climate change but disagrees with divestment activists “on the means by which a university should confront it.”

“Harvard is fully committed to leadership in this area through research, education, community engagement, dramatically reducing its own carbon footprint, and using our campus as a test bed,” Newton wrote.

Ana C. Gonzalez Valdes, a graduate student studying Earth and Planetary Sciences and a HGSU-UAW member, said that the union is continuing to work on securing a contract.

“We’re going to continue to organize so that we can get a contract with protections against harassment and discrimiantion,” Gonzalez Valdes said.

Gonzalez Valdes said the Union is standing in solidarity with the undergraduate groups because they stood with them during their strike.

In December, HGSU-UAW maintained a nearly month-long strike marching on campus after more than a year of negotiations with school officials. Hundreds of students and supporters joined the picket line throughout the strike.

Newton wrote in an email to The Crimson that the University “remains committed to addressing concerns raised during these ongoing negotiations and is hopeful the mediation process currently underway will help resolve differences that remain between the two sides.”