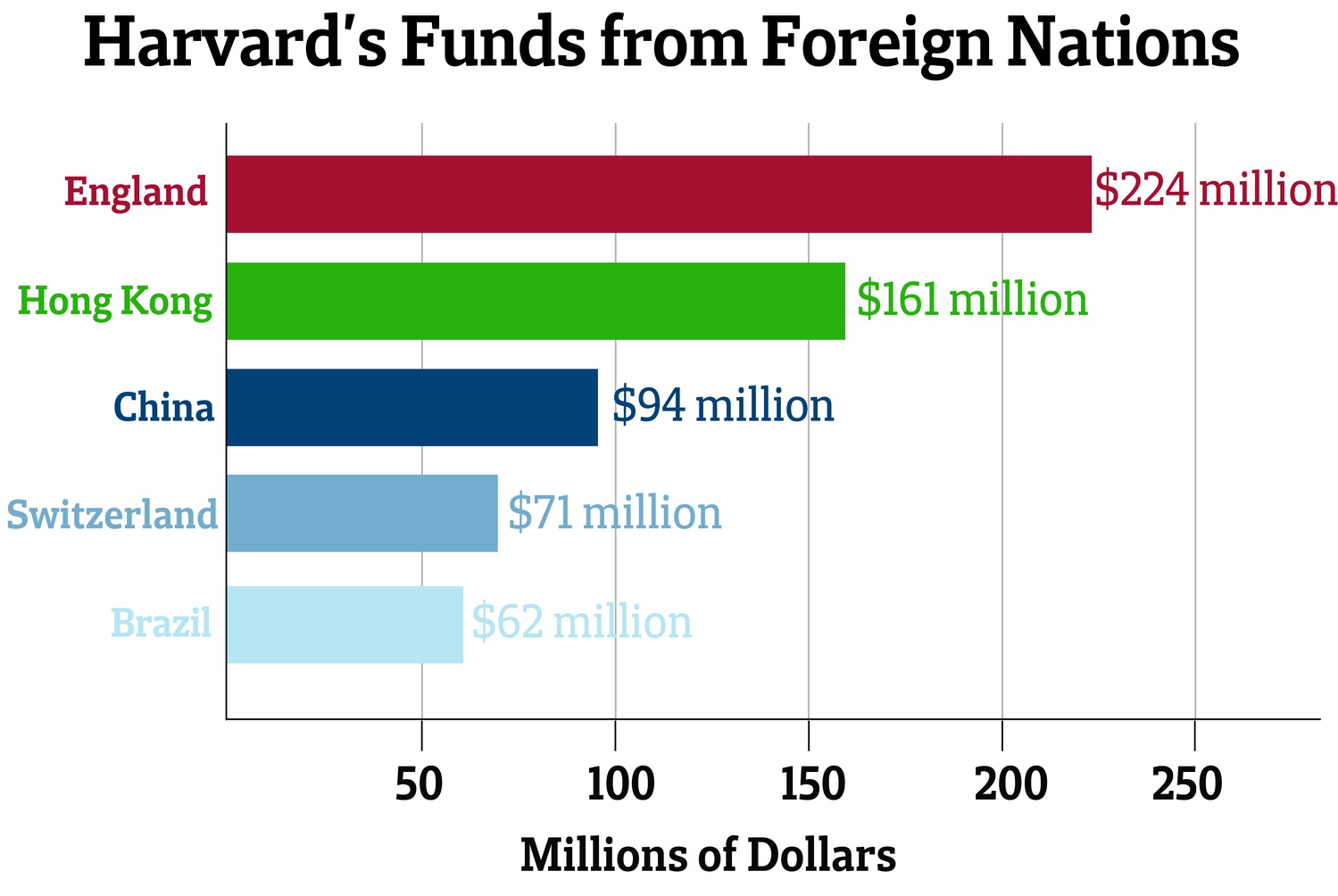 Harvard has reported receiving more than $1.1 billion from sources from 63 foreign nations between Jan. 1, 2013 and July 31, 2019, per United States Department of Education data.

The Department of Education wrote in a letter to Harvard dated Tuesday that it is opening an investigation into whether the University has properly reported funding it receives from foreign sources. Section 117 of the Higher Education Act requires that all American institutions of higher education report contracts and gifts from foreign sources that total over $250,000 a year to the Department of Education in an attempt to “balance academic freedom and national security,” per its website.

In its letter, Department of Education officials asked the University to disclose information about contracts or gifts connected to multiple foreign governments and other overseas organizations. The notice came amid an ongoing federal review of American universities’ connections to foreign governments.

“Harvard University lacks appropriate institutional controls and, as a result, its statutory Section 117 reporting may not include and/or fully capture all reportable gifts, contracts, and/or restricted and conditional gifts or contracts from or with foreign sources,” the letter read.

Sources from England boasted the highest sum given to Harvard, at $224 million. That figure represents about 20 percent of all funding English sources donated to American higher education institutions over the same time period.

Hong Kong came in second at $161 million — around 23 percent of its total to all American universities.

In its letter to Harvard, the Department of Education requested records regarding the University’s donations from China, Iran, Russia, Qatar, and Saudi Arabia.

At $94 million, China has the third highest total donations to Harvard currently logged in the department’s records.

The University reported over $30 million from sources in Saudi Arabia, which ranked 10th on the list of Harvard’s top donor nations. The funds made up slightly over four percent of the country’s donations to all American universities over that period.

Harvard also reported five donations from Qatar, totaling about $6 million — less than one percent of Qatar’s more than $1 billion in donations to American colleges and universities.

Harvard reported no donations from Iran or Russia over the six-year period.

Between July 2011 and June 2018, Harvard raised $9.6 billion in a record-breaking capital campaign. Individuals from 173 countries contributed to the campaign, according to University spokesperson Christopher M. Hennessy.

About 15 percent of campaign dollars came from international donors, who comprised nine percent of individual donors overall, per Hennessy.

“In 2018, the university concluded a successful capital campaign,” Hennessy wrote in an emailed statement. “Such philanthropy supports the university’s core teaching, learning, and research mission.”