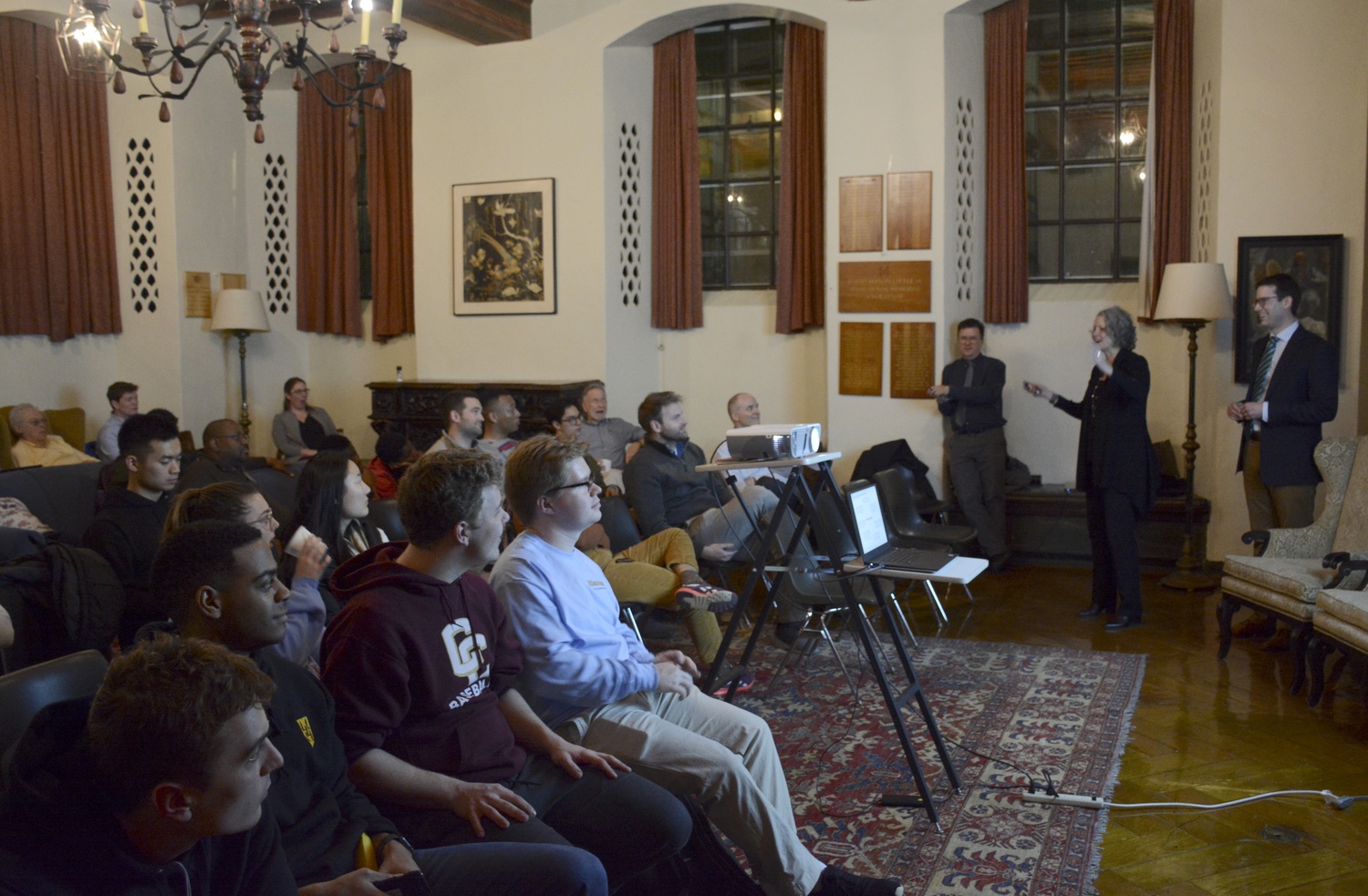 Members of Adams House met on Wednesday evening to hear and discuss updates on Adams's current construction. By Owen A. Berger
By Camille G. Caldera and Amanda Y. Su

Seventy-nine percent of student beds in Adams House will be in singles and 77 percent will be in suite-style living after the House’s renovations are complete, architect Nathaniel F. R. Rogers ’05 said in a presentation to Adams affiliates Wednesday evening.

The renovations will also increase the capacity of Adams dining hall by 35 to 50 seats and add “new meeting and break out spaces,” according to the presentation, which was put on by Rogers and two other architects, Elizabeth Leber and Aaron M. Lamport ’90.

Adams House is currently in the first year of a four-year renovation plan — the longest project the College has taken on thus far as part of its House Renewal program.

At the presentation, students raised questions about murals that generations of Adams residents have painted on the walls of tunnels that run under the House.

Due to deterioration and groundwater damage, Rogers said they will not be able to save “many or any” of the original murals. However, he said they plan to create a digital photographic archive so students can “visit the tunnels virtually.”

“There will be an incredible amount of blank canvas to create new murals for the next 10, 20, 30, 40 years,” Rogers said. “This is really about another chapter in the Adams House story.”

The renovation also aims to unify the three buildings that comprise Adams House. Originally, separate developers built the buildings as private off-campus housing and never intended for them to “relate” to each other, per Rogers.

The project will create a “mid-block access” that extends from Russell Hall, to Claverly Hall, to Westmorley Hall. The mid-block access would make the outdoor sidewalk entrances to buildings the same level as the floor inside of them, allowing wheelchair users to enter more easily.

“This really serves two purposes,” Rogers said. “One is to really make Adams feel more like one single community, even though you're spread across three different city blocks. The second is it actually achieves a lot of accessibility needs.”

The renovation project will also make the Adams Pool Theater and the House’s courtyard more accessible.

Lamport also said that Adams House will be the first house to boast direct air ventilation into each individual room.

“It’s not air conditioning — it can’t claim to be that — but that air has been dehumidified, it’s going to be certainly cooler on a hot day than what’s out on the street, and it means there’s less of a need to open up a window,” he said.

Other amenities in the renovated house will include small offices designed for phone calls and a new common space called “The Loft.”

Adams is the sixth house — after Leverett, Quincy, Dunster, Winthrop, and Lowell — to be renovated.

Claverly Hall and Senior House — which are under construction during this academic year — will open in August 2020. Renovations on Randolph Hall and Apthorp House are set to begin this June and finish by January 2022, though students will not move into those buildings until the next academic year. Renovations on Russell Hall, Library Commons, and Westmorly Hall will start in June 2022 and end in August 2024.