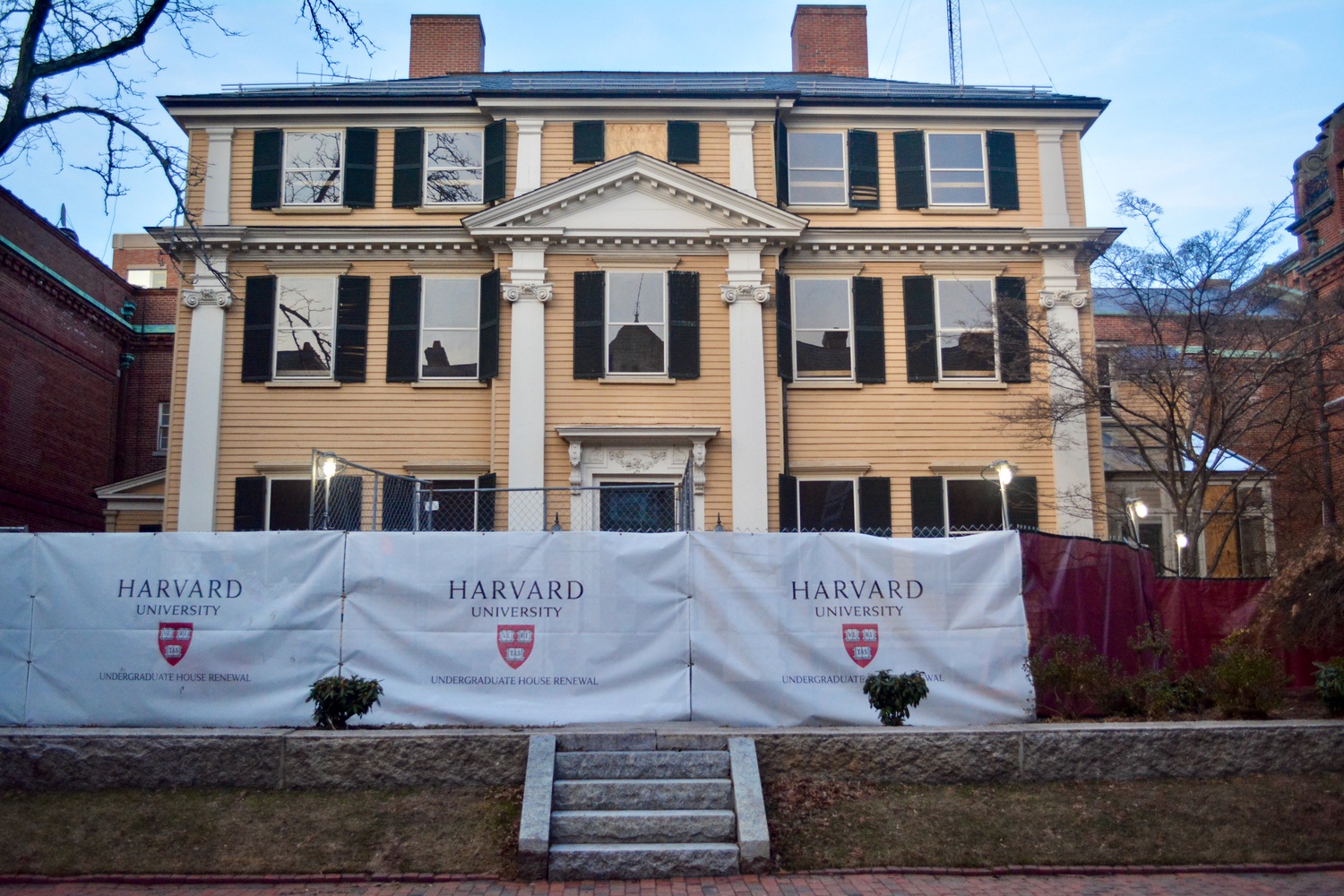 Apthorp is a historical building in Adams House that is currently in the process of being restored. By Jenny M. Lu
By Sydnie M. Cobb and Declan J. Knieriem, Crimson Staff Writers

Apthorp House, which has served as Adams House’s faculty dean residence since 1931, anticipates at least a six month delay in the reopening of the building.

Apthorp’s restoration was originally slated to begin in summer 2020, with the building’s reopening slated for August 2021. According to Adams House Faculty Dean John G. “Sean” Palfrey ’67, the opening has now been rescheduled to early 2022 because of the significant changes planned for the 260-year-old building.

Palfrey said Apthorp House’s heating system will undergo some much-needed changes. He also explained that the added renovation time will ensure that issues like “minor cracks in the foundation” of the building can be properly addressed.

“During the 21 years we were in Apthorp, the ceiling fell in four or five times because the steam and the moisture gets into the walls and ceilings and destroys the plaster and then the ceiling falls in,” Palfrey said. “Now we’re renovating it in a way that won’t allow the building to fall apart for at least the next 100 years.”

The refurbishment of Adams House is the latest development in the over $1 billion House Renewal Initiative. The Adams House renewal project is projected to occur in three phases spanning across four years, with completion scheduled for fall 2023.

Merle A. Bicknell, the assistant dean for the Faculty of Arts and Sciences’s Office of Physical Resources and Planning, wrote in an email that the plans for the Apthorp renewal were “considered in full light” of its age and history. The last time the building was renovated was in 1930.

The renovated building will retain all of the original wooden structures within the building, though some heavy beams will be reinforced with steel to prevent changes in the wood that could “jeopardize the health of the structure” over time, according to Bicknell. She added that these strategies for renewals are meant to comply with Cambridge Historical Commission guidelines.

“The work planned for Apthorp is intended to steward it well into the twenty-first century, while remaining sympathetic to the original design and historic building technologies employed in its construction,” she wrote.

Historical Commission Executive Director Charles M. Sullivan said in an interview that the Commission was heavily involved in the planning of Apthorp’s renewal, given that the building falls within the Harvard Square Conservation District. He agreed with Bicknell’s assessment that the interior will “substantially” retain its original structures. He did acknowledge that, due to the age of the building, unforeseen issues may arise, and said members of the commission will be present to supervise the initial construction work.

“For a renovation project for a structure that old, there's often pretty clear possibility that there could be that kind of replacement necessary,” he said.

Bicknell wrote that the renewal planning takes the unexpected into account when dealing with Apthorp House.

“House Renewal work is always surgical, but at Apthorp it will be even more so, and due to the home’s age and evolution, we expect to learn new things about the house as various layers are revealed during construction,” she wrote.