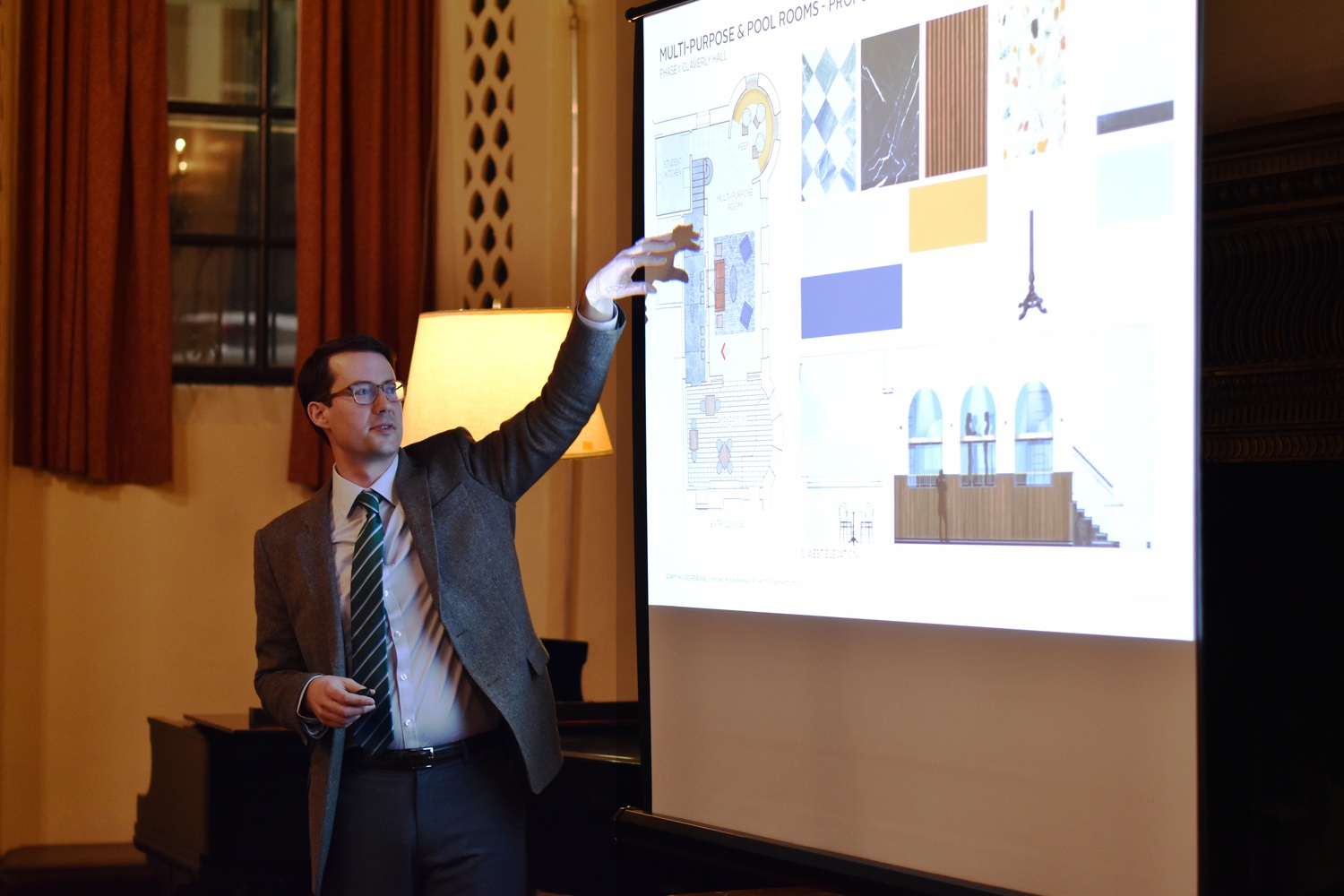 Plans for Adams House renewal and its timeline were shared with students and other residents Tuesday evening. By Quinn G. Perini
By Sanjana L. Narayanan and Samuel W. Zwickel, Crimson Staff Writers

The Adams House renovations timeline, previously slated to begin in June 2019 and take three years, will now extend another year and conclude by August 2023, Faculty of Arts and Sciences administrators announced at a Tuesday town hall.

“We’re in such an urban environment that there’s really no kind of area for staging and things of that sort,” Bicknell said.

“If you’re thinking about cash flow, it’s better to phase it out for cost reasons as well,” she added.

The newly announced plans are the latest development in the over $1 billion House Renewal initiative, which has included the complete overhaul of several historic dormitories in Harvard Square. Winthrop House and Dunster House each underwent one-year renovations, and Lowell House is set to re-open prior to Commencement this spring following its “most complex” two-year restoration.

The project has faced financial woes in recent years, relying on donations and increasing pools of debt financing as the University’s Capital Campaign came to a close in June 2018 and the Harvard Management Corporation faces historically low endowment returns. Former FAS Dean Michael D. Smith wrote in a 2017 report that financial constraints were a major component of the decision to extend the Adams construction timeline to three years. Now, it will last four.

Adams will be the first house to see construction span three separate phases. Claverly Hall and Senior House are scheduled to open in August 2020; Randolph Hall and Apthorp House in August 2021; and Russell Hall, common spaces including the dining hall, and Westmorly Court in August 2023.

Rogers – an architect from Beyer Blinder Belle, a New York City-based firm that worked on renovations for Winthrop, Dunster, Quincy House, and Leverett House – said Adams will meet LEED Gold environmental certification standards after renovations. He added that the House will be more accessible following the addition of eight elevators throughout the buildings.

The renovations will add air-conditioning to public areas including the dining hall and the library, and suites will feature fans, central air circulation, and the necessary infrastructure for future air-conditioning installation in residents’ rooms.

Rogers said the renovations will include creating a 2000-square-foot multipurpose loft above the dining hall, adding new meeting and social spaces, relocating the gym, and modernizing the Pool Theater with features like an adjustable seating configuration.

“We’re not restoring the pool function,” Rogers said to laughter from student attendees.

Rogers said the redesigned physical layout will better fit Adams’ current population of 450 students to minimize the number of students who opt to convert their common room into an additional bedroom. The renovations will also add more hallway bathrooms, though not as many as have been added to Dunster and Winthrop.

Unlike Lowell students, who were all required to vacate their residence for the Inn at Harvard and other University-owned apartments around the Square for the duration of their house’s renovation, Adams housing will be split between current dorms and swing accomodations over the next four years. Though Adams dining hall will be open the first two years of renewal, facilities at the Inn will take its place during the third phase of the renovations.

Administrators held several town halls in spring 2018, during which students could offer input about the issues they would like to see addressed in the renovations. Student concerns included congestion of common areas and the preservation of distinctive spaces like the Lower Common Room and the dining hall. They also said they wanted Adams to retain its “weird” and “Hogwartsian” character.

Bicknell said in an interview that preserving Adams’ hallmark culture was a “giant priority.”

“This was something we heard from students a year ago when we met with them: Keep Adams ‘Adams,’ keep all the special quirkiness of Adams,” Bicknell said. “People will be able to come back and this room will feel exactly like it does, but it will have air conditioning and it will have all those other things.”

Adams administrators will host another information session for residents on March 26 to outline a much-anticipated housing lottery process for the 2019-2020 academic year; the lottery will begin on April 15.

Interested Adams students will have the opportunity to join a committee tasked with brainstorming the design of new common spaces, furniture selection, and decorations throughout the House.

A previous version of this story incorrectly stated that FAS Assistant Dean for Physical Resources Merle Bicknell cited “cost reasons” and Adams’ urban location as reasons for extending the renovation timeline from three to four years. In fact, Bicknell was explaining why the Adams project is phased along a timeline longer than the other renewal projects."