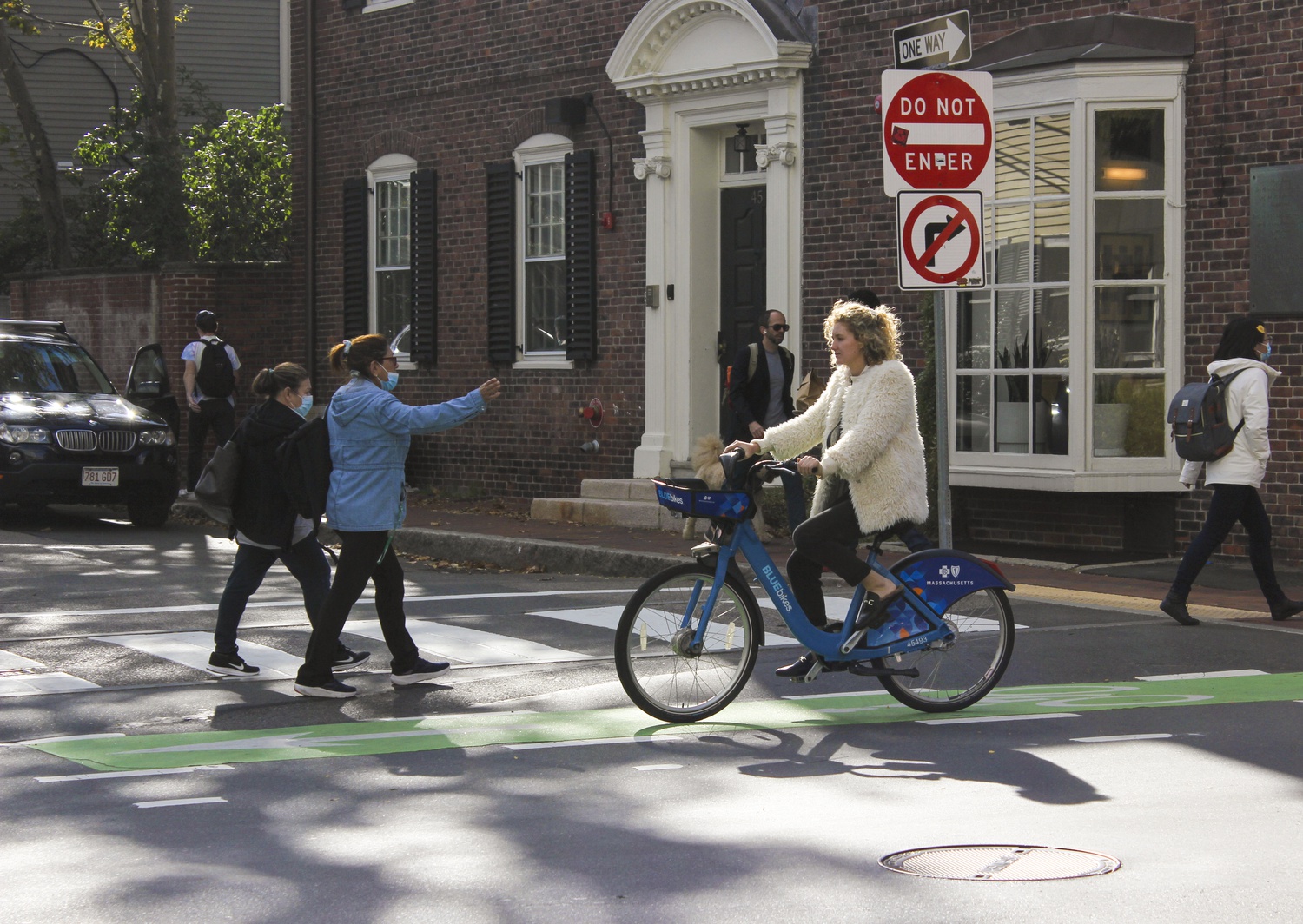 On foot, on scooter, on the shuttle, or the T, Harvard students cover lots of ground day-to-day. Now, students are turning in increasing numbers to BlueBikes, a bicycle sharing system that operates in the Boston metropolitan area, to get around.

There are hundreds of stations across the BlueBike network, including 14 on or near Harvard’s campuses. According to Harvard’s CommuterChoice Program, approximately 1,000 affiliates are taking advantage of the University’s discounted annual membership.

The number of BlueBikes trips taken in Cambridge reached its highest point all-time in September, with the company recording over 153,000 rides, according to company spokesperson Patrick Kelsey. The company is aiming to install a further 150 public bike racks each year.

Isabelle S. Zheng ’23 said having classes in the new Science and Engineering Complex, a 20 minute walk from her on-campus residence, served as the impetus for her to get a BlueBike subscription.

“So far it’s been really useful,” Zheng said. “I probably use a BlueBike three or four — usually more — times a week, even beyond going to the SEC.”

The Undergraduate Council is also spearheading initiatives to subsidize BlueBike memberships, offering subsidies to 100 students for a 50 percent discount to BlueBikes’ annual membership. Four hundred students applied for the subsidy, according to UC President Noah A. Harris ’22.

The UC also partnered with BlueBikes to give out 300 free one-day passes on Oct. 9, the night of the Harvard-Cornell football game.

“We did the free BlueBikes day, further promoting [the subsidy] and trying to get students aware that this is a good resource,” Harris said.

Some athletes are also starting to use BlueBikes, in addition to buying scooters or using their own bikes to commute to and from practice across the Charles River.

Kevin Z. Sze ’24, a member of the Harvard golf team, explained in an text message he chose to get an annual BlueBikes membership after doing the math.

“Buying a regular scooter is cheaper, probably around 100 dollars but slower and also some of my friends get knee problems since they’re always pushing off the same leg,” Sze wrote. “An electric scooter is faster but it’s more expensive (400 dollars).”

Sze wrote the other alternatives are not great either. Harvard’s shuttles often are not running when the golf team gets back from tournaments, he said, and walking to its indoor facility, which is just past the stadium, “takes way too long.”

Other students have been using BlueBikes to explore Boston more.

Henry Kuo ’24 chose BlueBikes over the alternative of buying his own bike for the convenience of parking in Boston.

“I thought about other options because there were some people who would just get bikes, but then eventually I settled with BlueBikes because you get to tour Boston a little bit more,” Kuo said.

“Otherwise, if you have your own bike you wouldn't be able to park anywhere in Boston. It’s more likely that your bike will get stolen or disassembled,” he added.

— Staff writer Vivian Zhao can be reached at vivian.zhao@thecrimson.com.