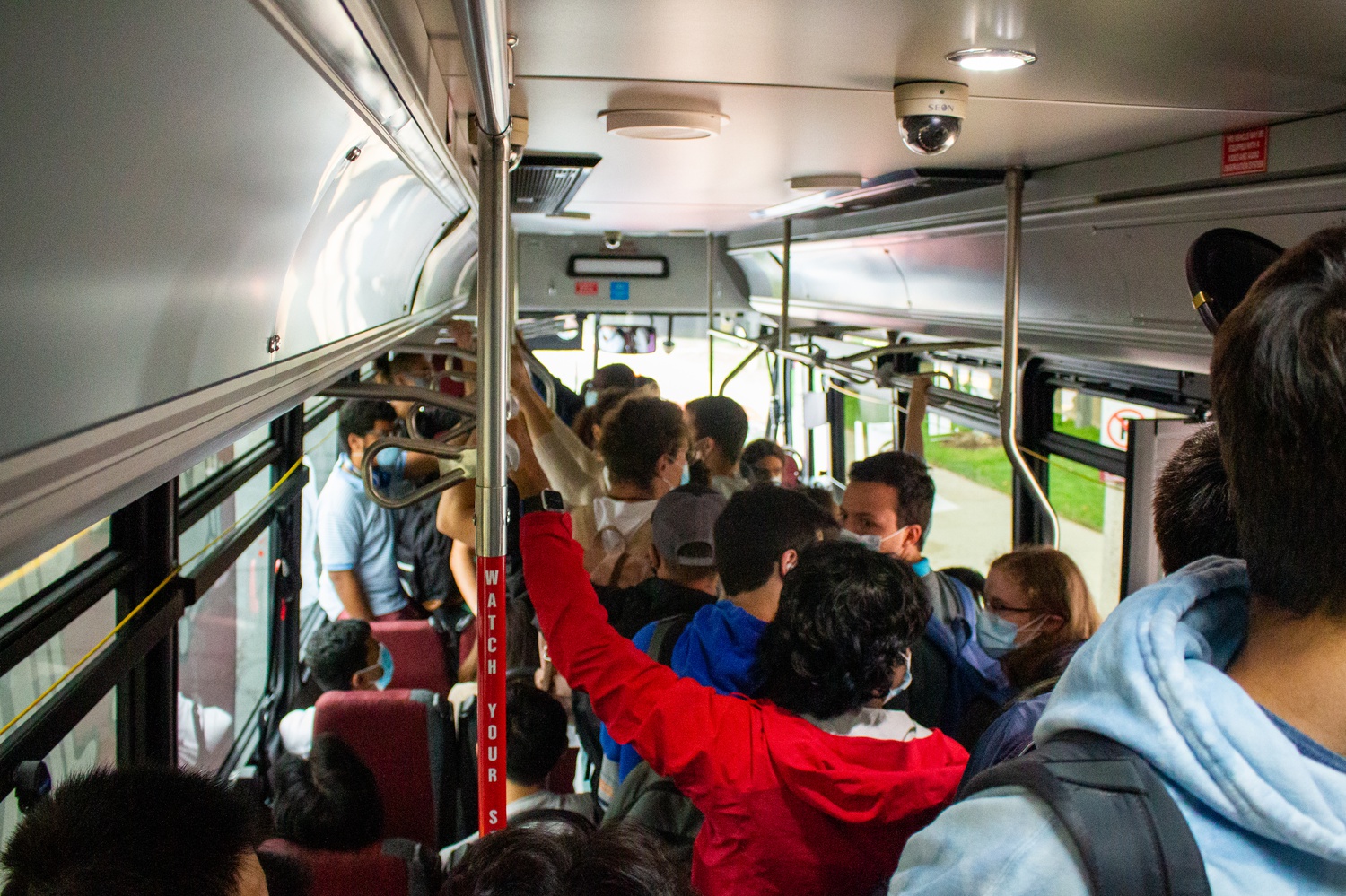 Students are packed tightly in a shuttle on the Allston Loop. By Ryan N. Gajarawala
By Natalie L. Kahn and Simon J. Levien, Crimson Staff Writers

Run by Harvard Campus Services, shuttles criss-cross Harvard’s campus, connecting hundreds of students in the Quad and Mather to the main campus and transporting students to the new Science and Engineering Complex in Allston.

The expansion of the shuttle system has rendered the service unreliable, students alleged.

Sílvia Casacuberta Puig ’23 said she felt “skeptical” about taking the shuttle from Harvard Yard to the SEC due to inconsistent wait times.

“You literally only get one chance to get the shuttle, and if you miss that one, the other shuttle is still at the SEC, so it would take at least 23 minutes if you didn’t catch the bus,” Casacuberta said.

Students living in the Quad also expressed concerns about the reliability of the shuttle going back to the Quad in the afternoon.

Pforzheimer House resident Chase R. Caserta ’24 said that while he wouldn’t call wait times a “huge issue,” he said he often has to walk back in the afternoon due to longer wait times.

“We wanted to come back on the shuttle, and we were at the Widener stop, but we waited like 10 minutes and then we had to go to the Lamont stop to catch another one,” he said.

“One of my main issues has definitely been hoping to get on the shuttle, checking the app, seeing that no vehicles are available, and then seeing shuttles come by, and they were not reflected on the app,” said Kristina Pema ’24.

Campus Services spokesperson Michael D. Conner did not respond to specific criticisms about Passio Go, but he maintained that the “vast majority of shuttles did run on time.”

In addition to wait times, some students cited concerns about overcrowding on the shuttles.

On the first day of classes, Jaxson T. Hill ’23 said shuttles were packed to the brim, leaving some students susceptible to being turned away from crowded buses.

“It’s 100 percent going to be an issue,” Hill said. “The shuttle was so packed that the bus driver was legally not allowed to move forward.”

“I heard several Covid concerns among the people around me, saying that it wasn’t very Covid- friendly,” she added. “That’s something that could be resolved if more shuttles were coming.”

In an emailed statement to The Crimson, Conner wrote that the shuttle services were “closely following capacity guidelines from public health officials.”

Michael C. Gul ’23 of Cabot House said he takes the shuttle at off-times — most often at 7:00 a.m. — and has not encountered any snags in his commute.

“When I have had or when I want to take the shuttle, I have not really had any problems,” Gul said.

Pema said she hopes the shuttle system will improve before winter in Massachusetts takes hold.

“Honestly, I’m just worried that when the weather gets worse — when it’s snowing or anything — it’s going to be the same waiting times,” she said.