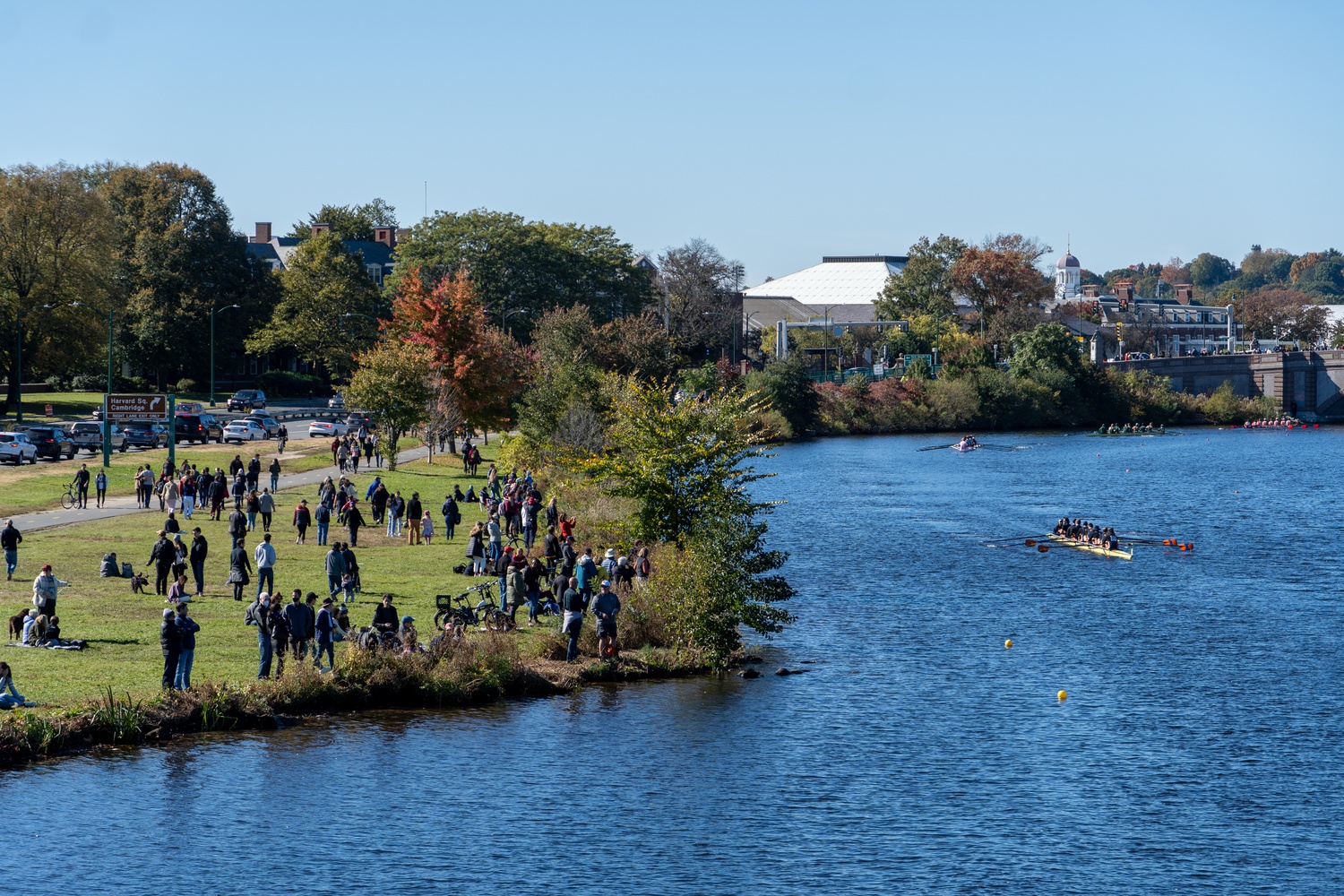 Harvard affiliates, tourists, and volunteers convened at the Charles River this past weekend to attend the Head of the Charles Regatta, one of the world’s largest rowing events.

Upwards of 11,000 athletes participate in the regatta each year. Rowers and spectators alike returned to Cambridge on Friday for the first time in two years, as last year’s event was cancelled due to Covid-19 safety concerns.

Harvard crew team members shared their excitement about competing at the Head of the Charles.

Lars F. W. Caspersen ’24 — a member of the Harvard men’s lightweight team that competed in the Club 4+ race — said the regatta had “a pretty electric atmosphere.”

“No one had really competed in two years,” Caspersen said. “So people were really, really excited to get out there.”

Haley J. Kwoun ’24 — coxswain for the men’s heavyweight team that competed in the Club 4+ race — said competing at the regatta was a “very high stress situation” but that the race also brought “ton of excitement.”

“The support from the crowd feels amazing,” she said. “And knowing that a lot of the Houses and communities were out there cheering for us was insanely cool.”

Alexander M. Sullivan ’24 — a member of the men’s heavyweight team that competed in the Championship B race — said he was pleased with the performance of the Harvard crew program.

“We put a good mark out showing that we’re still a competitive program, and we have quite a lot of depth in the squad,” he said. “It’s a really good place for the team to move on from here through the rest of the fall.” 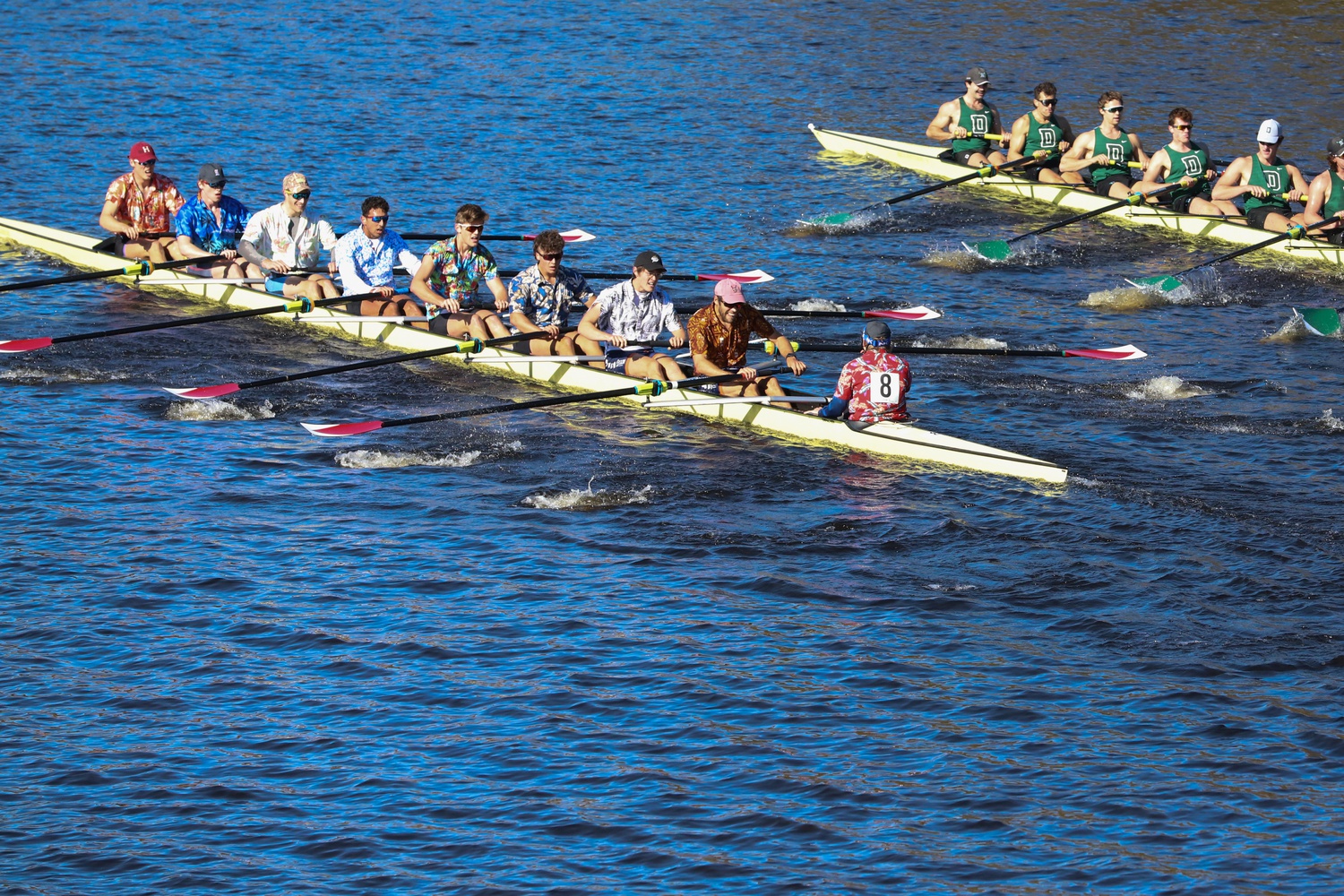 Two boats race each other on the Charles River during the Head of the Charles on Sunday. By Owen A. Berger

For brothers Eric W. Huefner ’88 and Steve F. Huefner ’86, this year’s Head of the Charles Regatta was a familiar scene. Steve rowed for the heavyweight crew team during his time at Harvard, and the brothers have enjoyed numerous regattas since graduating.

Steve Huefner described Saturday as a “perfect day” for the regatta.

“All the people who come just to take in the moment, a lot of them are not always watching the regatta,” he said. “They may have a particular event that they know comes up so they want to cheer someone on for a bit, but then the rest of the time they’re just enjoying being outdoors along the river.”

The Head of the Charles Regatta attracts hundreds of thousands of people every year from around the world. Erik T. Kahler flew in from Chicago to watch his daughter compete and applauded Boston for being a convenient travel destination for this special event.

“Boston is an easy place to get to, when the weather’s good,” Kahler said. “It’s definitely used to having visitors so it’s very manageable to get around.”

Matthew M. Pluzsik, a student at Ramapo College of New Jersey who chose to attend the event after seeing regatta volunteers in Cambridge, said he enjoyed watching the rowers compete.

“It’s good to see when there are a few rowers that are right next to each other, and how they try to pass each other,” he said. “Everyone’s so in sync, and they’re working toward that common goal of getting to the end.”

Rachel F. Bregman drove in from New York to cheer on her daughter — Daniella Bregman ’25 — in the Harvard lightweight women’s crew race and said the regatta was pretty similar to previous years despite the ongoing pandemic.

“From a spectator perspective — to us — it seems just as busy as ever,” Bregman said.

Local vendors also lined the Charles River throughout the weekend to sell their products.

Students at the Cambridge Rindge and Latin School held a bake sale at the regatta to support the Harvard Square Homeless Shelter and Y2Y Harvard Square.

Dennis Peters – director of marketing at Gourmet Nut – gave out samples of the company’s Power Up Trail Mix at the regatta.

“This is a great crowd for us because we want to get in with folks who are in college and love to get healthy,” he said.

Peters added that he had been attending the regatta for the past 25 years.

“It’s great to see everyone back after last year not happening. I think the weather helped a little bit, but generally speaking, people seem really excited to be here,” he said. “Everybody seems really happy, actually, which is good to see.”

—Staff writer Christie K. Choi can be reached at christie.choi@thecrimson.com.