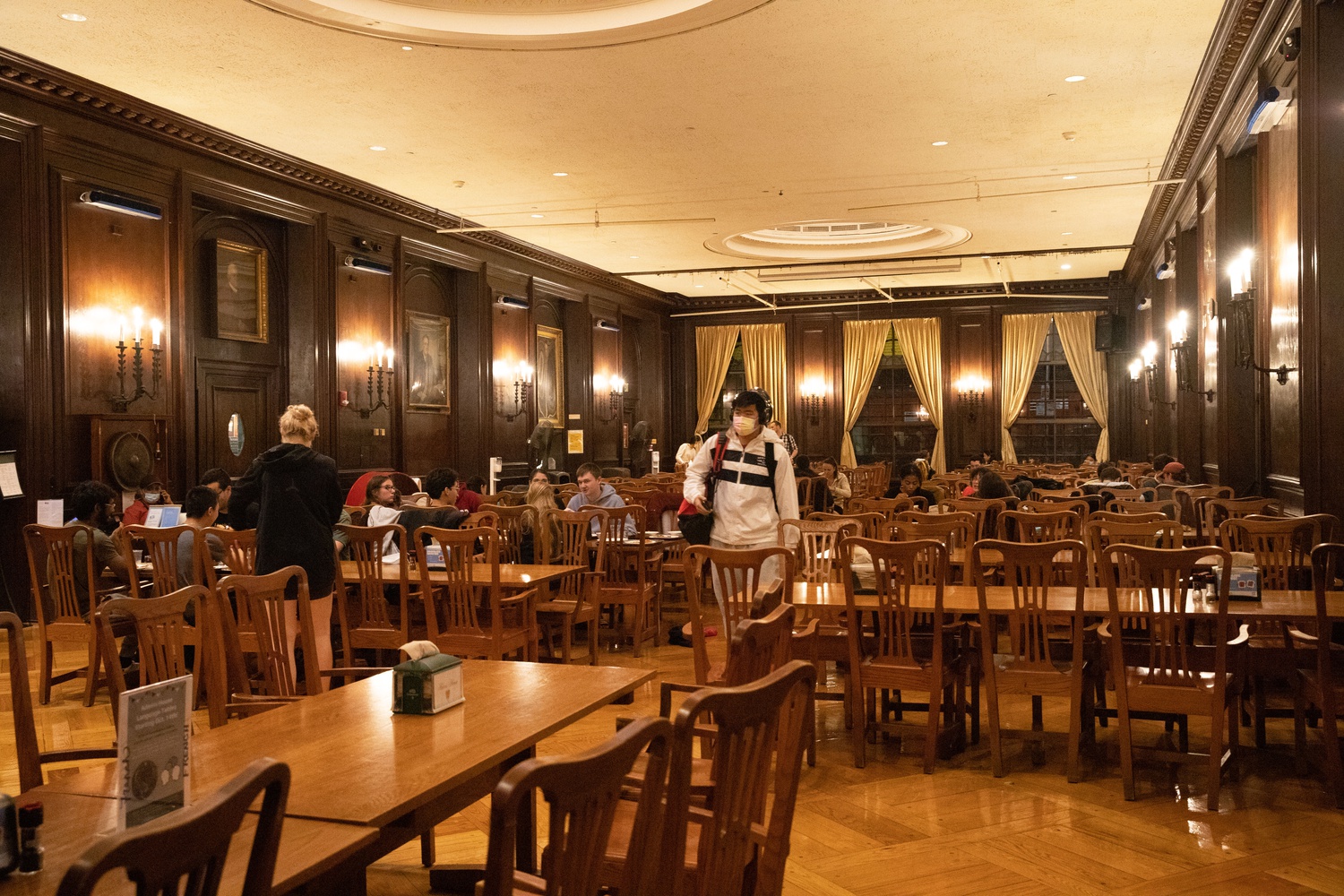 An infestation of fruit flies in Adams dining hall has caused distress among residents, who reported flies in their salads, hamburgers, and frozen yogurt. By Pei Chao Zhuo
By Yuen Ting Chow, Crimson Staff Writer

An infestation of fruit flies in Adams dining hall has caused distress among residents, who reported flies in their salads, hamburgers, and frozen yogurt.

The insect problem began roughly two weeks ago, students in Adams House said, when innumerable miniature flies descended on the dining hall’s servery and dining area, creeping their way onto diners’ plates. Flies continued to swarm the dining hall as of Tuesday night.

Adams House resident Patrick R. Koenigs ’23 usually eats every meal in the House’s dining hall. He said now, however, he is currently only eating there once per day because the flies make him uncomfortable.

“I remember trying to get ice cream, like soft-serve, and seeing one of them literally coming down as the ice cream was being dispensed, which was just disgusting,” Koenigs said. “While you eat, some people put napkins over their cups, kind of jokingly but also not jokingly. They put napkins over their food when they’re not eating, and it just becomes like a far different experience.”

Though fruit flies are primarily known as “nuisance pests,” a 2018 study by Ecolab Inc. — a pest elimination company — found they can potentially spread bacteria and foodborne pathogens.

Harvard University Dining Services spokesperson Crista Martin wrote in an emailed statement Tuesday that the University took swift action against the infestation and will continue to combat it.

“The issue of fruit flies at Adams House was immediately addressed by multiple University resources to identify the source and then employ safe and effective control measures,” she wrote. “Those efforts are still underway, the issue has abated significantly, and this work will continue.”

HUDS employee Dee L. Ross-Burton, who works in Adams, said the dining staff is taking extra care to clean the dining hall and is using makeshift strategies to mitigate the problem.

She added that a HUDS inspector visited the dining hall Tuesday to study the flies.

Adams resident Morgan L. Whitten ’21-’22 said she is braving the flies to eat in the dining hall.

“I have talked to people who are just trying to be at peace with it, because we do love the dining hall,” she said.

Residents also said they have noticed fewer people frequenting the dining hall, where in addition to eating, students usually study and socialize.

“I was working here last Saturday evening at like 9:30,” Adams House resident and Crimson Arts editor Mikel J. Davies ’23 said. “I was the only person in the dining hall, which is pretty unusual, even for a weekend night.”

Statistics 110: “Introduction to Probability” has even indefinitely moved its office hours from the Adams House dining hall to Kirkland House’s dining hall because of the flies, according to an announcement on the course’s Canvas site.

Though he finds the flies burdensome, Koenigs said they have not tainted his positive views of Adams House.

“The dining staff could not be more friendly, so I never think poorly of Adams House in particular,” he said. “But I do wish this was solved because it’s frustrating and incredibly annoying.”