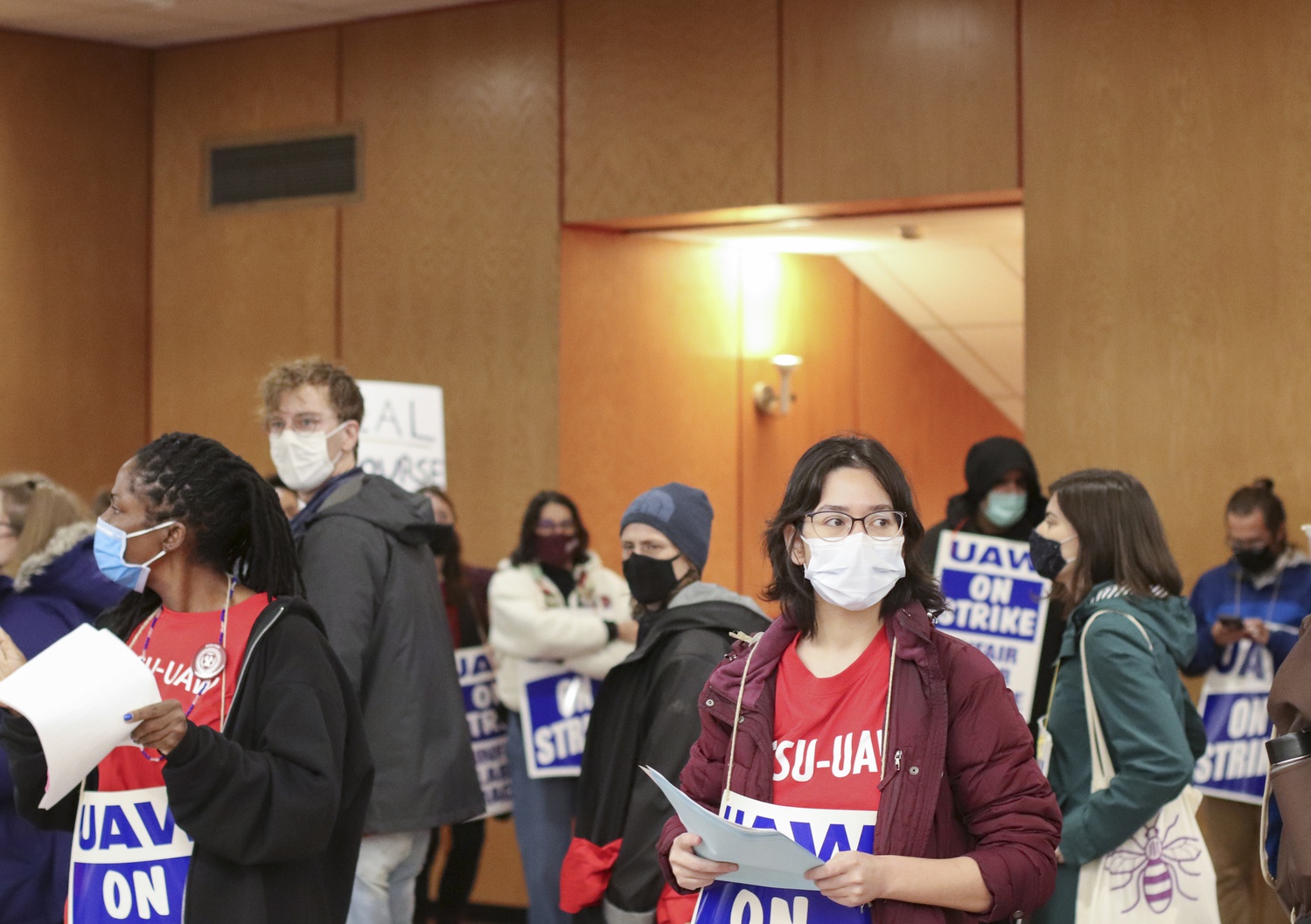 The first day of the Harvard graduate student union strike disrupted undergraduate courses Wednesday, as some professors canceled their classes to support the student workers and the union formed picket lines to discourage students from attending class.

Wednesday morning, student workers and their supporters picketed William James Hall, Sanders Theatre, and the Science Center to disrupt 10:30 a.m. lectures. Upon seeing the picket lines, some students in Economics 10a: “Principles of Economics (Microeconomics)” and Economics 1010a: “Intermediate Microeconomics” did not attend class.

In the afternoon, some students did not attend Chemistry 17: “Principles of Organic Chemistry” in the Science Center because they did not want to cross the picket line.

Chem 17 student Stacey D. Fabo ’24 chose not cross the picket line Wednesday for ideological reasons, but she said she is concerned that her support for student workers’ demands could come at the expense of her midterm grade.

To ensure course continuity, course heads — the professor and a preceptor — will be holding sections, which are traditionally run by graduate students.

“It puts me in a tough position because I want to do well on this midterm, but it also compromises all my beliefs to cross the picket line and go to these course head-taught sections,” Fabo said.

Some professors moved class to Zoom Wednesday so students would not “be forced to decide between crossing the picket line or missing class,” per an email sent to students in Religion 40: “Incarnation and Desire.”

Other professors postponed events or canceled classes altogether in support of the union. The History and Literature department closed its physical offices and staff shifted to remote work. The department also plans to reschedule its fall celebration and toast for second-semester seniors.

In a department-wide email Monday, History and Literature director of studies Lauren Kaminsky wrote that the department “support[s] our colleagues represented by HGSU-UAW.”

History professor Alison Frank Johnson — a longtime supporter of HGSU-UAW — canceled her lecture for History 1265: “German History from Bismarck to Hitler,” due to the strike. Though she would not lecture on Weimar Republic politics Thursday, she suggested alternative learning opportunities for students in the course, such as writing an optional response paper and studying union activism in person.

“Anyone who wishes to spend our usual class time studying the mechanics of labor organizing can do so by participating in the picket lines,” she wrote in a Canvas message to students.

Amid the logistical chaos, some students said they were confused about what constitutes crossing the picket line.

Confusion in part stemmed from an email from the Harvard Student Labor Action Movement and the Harvard College Young Democratic Socialists of America that circulated among undergraduates. The email claimed that “attending lectures, professor-led seminars, or a professor’s office hours is not crossing the picket line.”

Harvard Graduate Students Union-United Automobile Workers bargaining committee member Aparna Gopalan clarified in an interview, however, that the email is not entirely correct: if a physical picket line is outside of a building, attending classes in that building means “crossing the picket line,” regardless of who is teaching.

The HGSU-UAW bargaining committee sent an email to members Wednesday evening with picket line best practices. The email encouraged members to educate students about the purpose of a strike.

“Explain how crossing a picket line undermines our collective power, and by extension, these goals,” the bargaining committee wrote.

“If there is a line of picketers outside of a class, we are attempting to cancel it. Faculty, staff, and students should not cross such a picket line,” the email reads. “If there is no active picket line (most courses), students may attend their class along with their peers regardless of who is teaching the class (TFs/faculty/others).”

The bargaining committee added that picketers should “stay respectful” to students and faculty as they advocate for “a harassment-free campus & good teaching/learning conditions for everyone.”

HGSU-UAW President Brandon J. Mancilla said the union asked professors to not move classes in a building blocked by a picket line to Zoom.

“That’s also crossing the picket line, because you’ve already decided to hold classes that were supposed to be canceled,” he said. “This is not a general policy for all classes, because it’s specifically about the places that are being picketed.”

Mancilla said that the confusion surrounding the picket line demonstrated the strike’s success in causing disruption.

“Having provoked different debates about what was or not crossing the picket line even if it might have been misinformed — that in itself is a show of the disruptive nature of our strike,” he said.