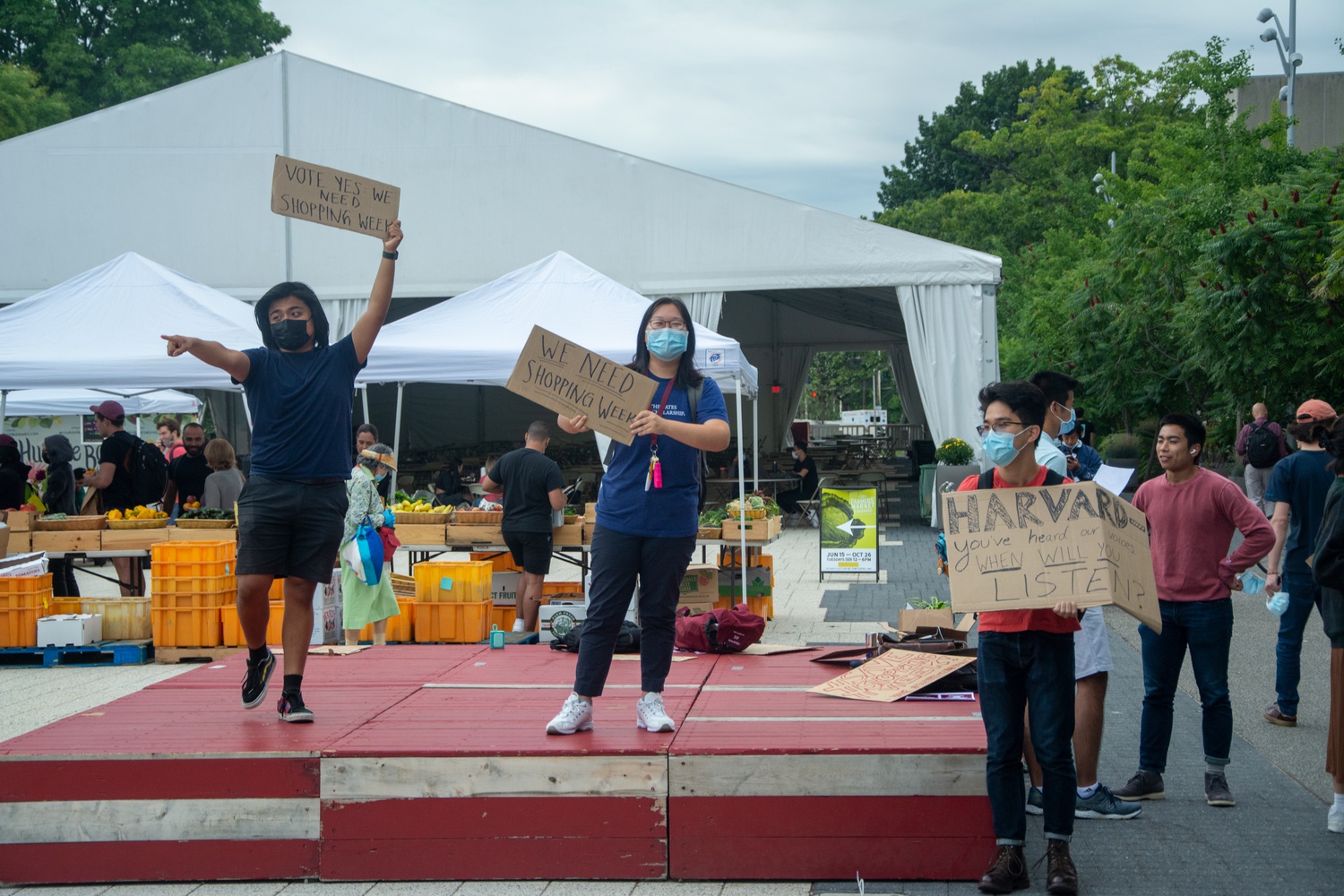 Students held a rally in support of shopping week in September after Harvard held an early registration period this fall for the third semester in a row. By Thomas Maisonneuve
By Meera S. Nair and Andy Z. Wang, Crimson Staff Writers

A Faculty of Arts and Sciences committee released a proposal recommending the College replace its current “shopping week” course registration system with a system of previous-term registration.

The Committee on Course Registration was tasked in spring 2019 by FAS Dean Claudine Gay with reviewing the FAS’s current approach to course registration and making recommendations for improvement within three years. The group published its 49-page final report on Thursday.

Shopping week has long been a point of contention between students and the administration. In 2018, Dean of Undergraduate Education Amanda J. Claybaugh proposed a move to an early registration system, arguing that administrators were “no longer certain that the benefits of the shopping period are worth the costs.” Gay also expressed support for early registration in an October 2018 interview with The Crimson, saying the shift would ensure courses are “pedagogically successful” for students.

The committee was formed in the wake of those discussions. Chaired by Philosophy professor Bernhard Nickel, it wrote in its report that shopping week was “very popular with undergraduate students who appreciated the opportunity to have a real experience with a class and its teaching staff before enrolling.”

“Indeed, we suspect that few aspects of our academic system see quite as much, and as strong, approval among undergraduates as the practice of registering for courses via a ‘Shopping Week,’” the report reads.

Yet, the committee found that the “high degree of uncertainty” caused by the structure of shopping week “undermines the teaching mission of the College.”

“[Shopping week] also gave rise to several major areas of concern that impact the overall quality of undergraduate education, including loss of instructional time at the beginning of the term, broad variation in how and when courses with enrollment limits decided to which students to offer spots, and uncertainty around enrollments,” it continues.

The committee also rejected the pre-term registration system used during the pandemic, citing its “drawbacks” including the inconsistent release of course information before the start of the term.

“For students, Pre-Term registration occurred during a time of unpredictable commitments as students were busy moving back to campus or completing jobs or internships,” the report reads. “Everyone lost a significant part of their semester breaks.”

Instead, the committee recommended that the FAS move to a system of previous-term registration, which would be “required to meaningfully reduce the enrollment uncertainty that leads to many problems.”

Under the committee’s proposal, students would be limited to enrolling in four courses during the enrollment period, which would be in November for spring courses and April for fall courses. Incoming first-year students would have until the end of July to register for courses in the fall term.

However, the committee also recommended that add-drop processes during the first week of class “be as unconstrained as possible.”

The committee proposed the implementation of the pre-registration system in fall 2023 for the spring 2024 semester, as “course registration during the fall term for the subsequent spring is much simpler.”

The Faculty has yet to announce a vote on the proposal.