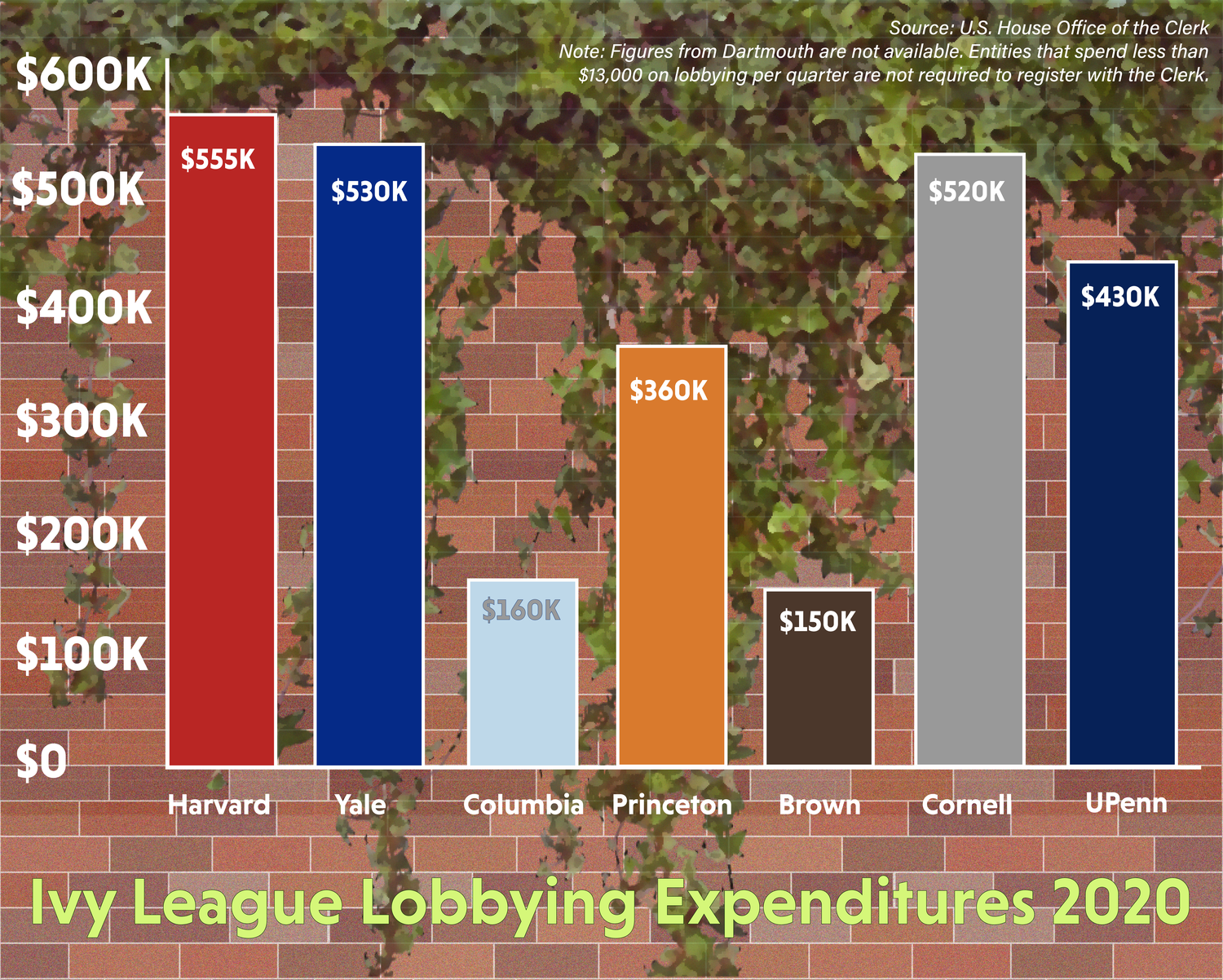 Harvard spent $555,000 on federal lobbying in 2020, outpacing all other Ivy League schools for the fourth time in the last five years. By Meera S. Nair
By Jasper G. Goodman and Kelsey J. Griffin, Crimson Staff Writers

Harvard spent $555,000 on federal lobbying in 2020, outpacing all other Ivy League schools for the fourth time in the last five years.

University President Lawrence S. Bacow and representatives from the University’s Office of Federal Relations lobbied the White House and Congress on issues tied to student financial aid, research funding, and taxes on Harvard’s $41.9 billion endowment. Last year also brought legislation related to the coronavirus pandemic and immigration to the forefront of the University’s lobbying activities.

“There has also been extensive outreach this year on the challenges surrounding the pandemic and the impact on the University and its students as well as the engagement of the faculty directly on COVID-19, on testing, treatments, vaccines, and health disparities,” University spokesperson Jason A. Newton wrote in an email.

Harvard’s spending decreased $40,000 from 2019, according to federal disclosures, marking the third straight year lobbying costs have fallen for the University. The drop over the past year — eight times larger than the 2019 change — marks the most significant decrease in lobbying expenditures since 2011.

Though the package initially granted Harvard nearly $9 million dollars, the University announced it would not “seek or accept” any CARES Act funding following backlash from members of Congress and former President Donald J. Trump.

In addition to the spat over CARES funding, the University publicly clashed with the Trump administration over immigration issues on numerous occasions. Harvard sued federal authorities last July over a policy that would have barred international students taking classes online from staying in the United States.

“Immigration and the issues faced by international students have been a particular focus in concert with the work of our peers, associations and the strong support of the Massachusetts delegation,” Newton wrote.

In a speech last Friday at the New England Business Immigration Summit, Bacow called on Congress to pass an immigration overhaul that provides “the broadest possible relief” for undocumented individuals.

“After an unprecedented period of hostility towards immigrants, towards refugees, we’re at a critical turning point,” he said. “We need Congress to pass legislation to put the undocumeted on a path to citizenship and to win back international students and scholars to avoid lasting damage to our national competitiveness, security, and prosperity.”

Across the Ivy League, legislation related to the pandemic and immigration remained high priorities. Nevertheless, all Ivy League universities for which data was available saw their spending drop from 2019.

Columbia, Brown, and Dartmouth have consistently spent the least on lobbying activities among Ivy League schools. Dartmouth’s expenditures have not met the minimum threshold for disclosure in recent years, according to Heather Drinan, the school’s institutional contact for the federal government.

For most Ivy League universities, 2020 lobbying expenditures reached their peak between January and March before declining through the rest of the year.

Terry W. Hartle, the senior vice president of government relations for the American Council on Education, said this trend may represent the limitations on in-person lobbying activities due to the pandemic.

“A lot of this was about person-to-person contact and advocacy with legislative officials, staff, and members, and that got real hard after the first quarter of the year,” Hartle said.

Harvard’s lobbying expenditures remained roughly steady over the past 10 years following a steep five-year drop between 2007 and 2011, a period during which the Democrats controlled the U.S. House and Senate. 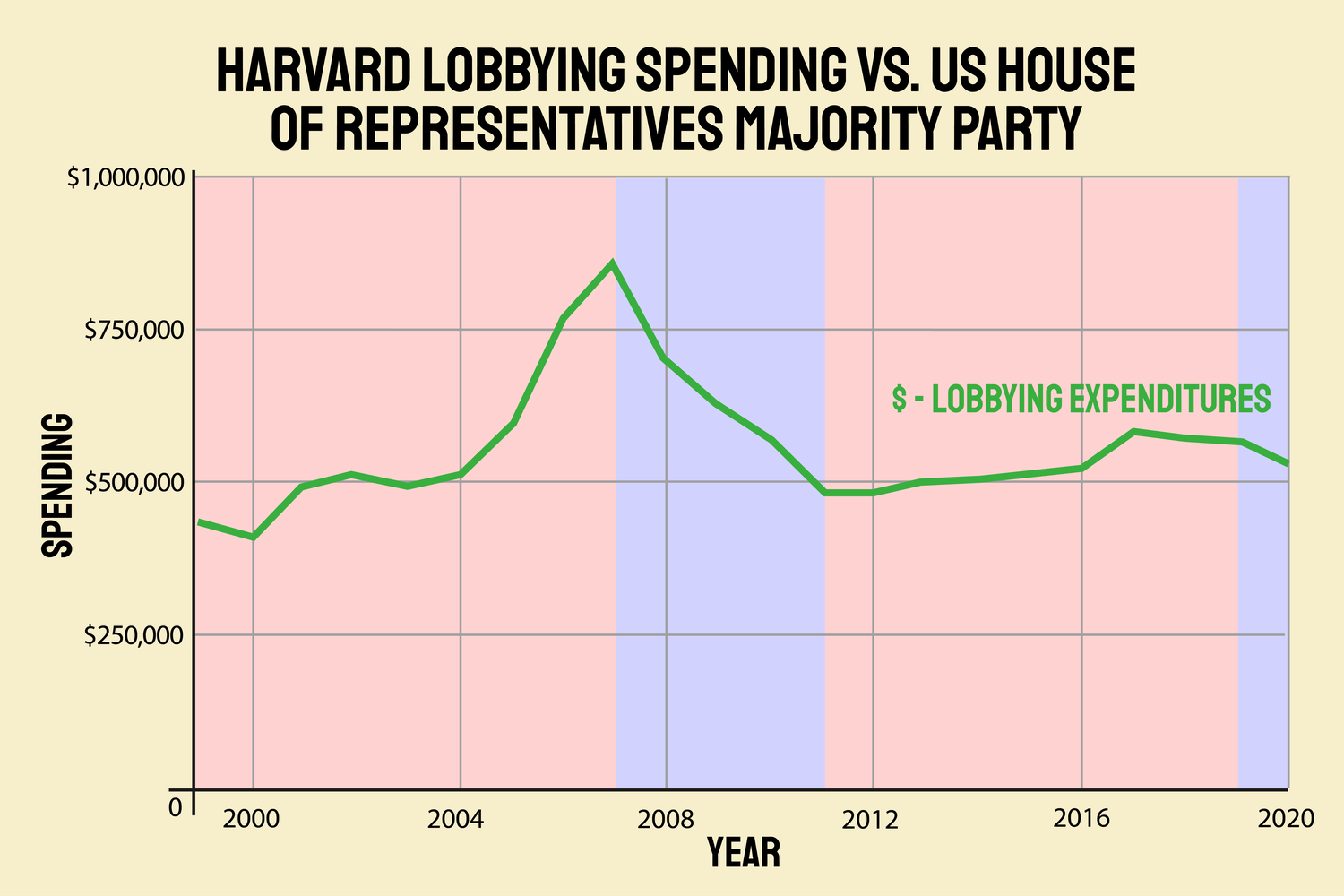 The University’s lobbying spending peaked in 2007 when Congress considered reauthorizing the Higher Education Act, which provided financial aid funding for students. Though the act was not reauthorized in 2013, Hartle said he hoped before the pandemic that Congress would address it in 2020.

“Last year, in the Senate, we had two really good senators in key positions to get that done, Lamar Alexander from Tennessee and Patty Murray from Washington,” Hartle said. “So there were hopes that Congress would get around to finally rewriting the Higher Education Act, but that simply didn’t happen.”

Hartle said that pandemic and economic recovery are going to be “job one for Congress” in 2021. He added, however, that he expects higher education lobbying activities and the White House’s priorities to center around reversing Trump-era policies, such as visa restrictions for international students and Title IX guidelines.

“There is just a whole raft of things where the Trump administration was moving in directions that were of great concern to many colleges and universities,” he said.