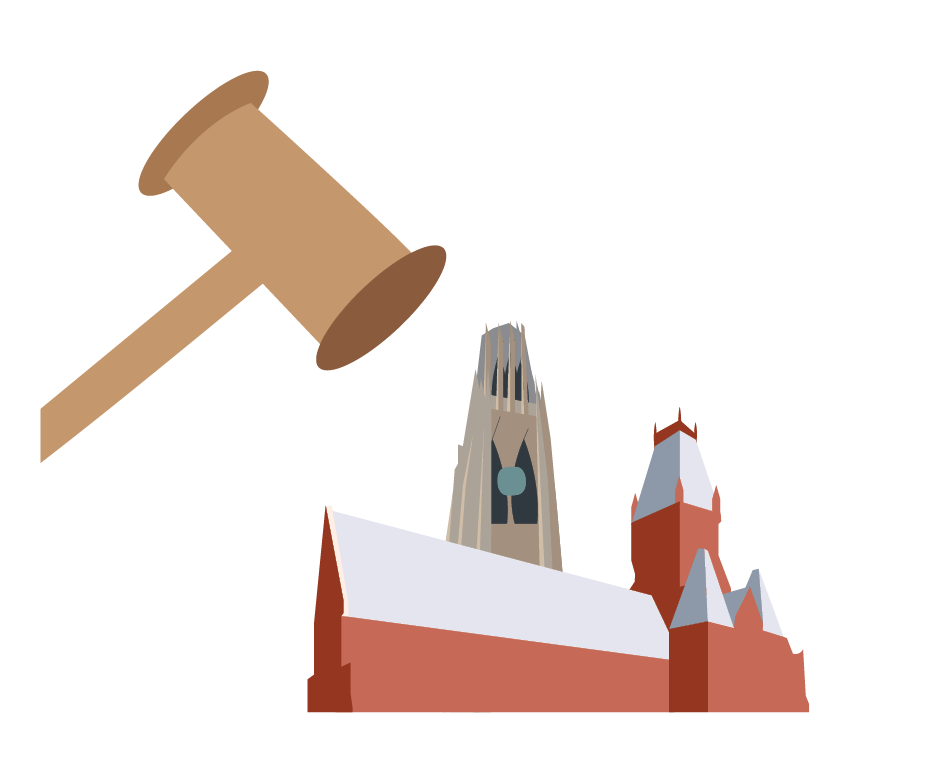 The Department of Justice on Wednesday dropped a lawsuit against Yale alleging discrimination in its admissions practices. Experts said it indicated the DOJ will likely withdraw support for a similar suit against Harvard. By Simon S. Sun
By Raquel Coronell Uribe and Jasper G. Goodman, Crimson Staff Writers

The U.S. Department of Justice dropped a lawsuit accusing Yale University of discriminating against Asian American and white applicants on Wednesday, leaving it all but inevitable that the new presidential administration will withdraw its support for a similar suit against Harvard.

The decision to drop the Yale lawsuit marks an anticipated but significant shift in the Justice Department’s approach to handling affirmative action cases following the election of President Joe Biden.

Legal experts and observers widely expect the DOJ under Biden to pull its support for the lawsuit filed by the anti-affirmative action group Students for Fair Admissions, which accuses Harvard of discriminating against Asian Americans in its admissions process.

“This almost certainly means that DOJ will not continue to support the challenge to Harvard’s admissions process,” William R. Yeomans, a lecturer at Columbia Law School who worked in the Justice Department for 26 years, wrote in an email.

SFFA is expected to file an appeal “in the next few weeks” asking the U.S. Supreme Court to hear the case, the group's president, Edward J. Blum, said Wednesday.

SFFA first filed suit against Harvard in 2014 in Massachusetts District Court. Harvard won that trial and a subsequent appeal before the U.S. First Circuit Court of Appeals.

Adam K. Mortara, the head trial lawyer for SFFA, said in an interview Wednesday that he believes the Justice Department withdrawing support for the suit would have no impact on the litigation.

“The Department of Justice and the Trump administration have been supporters of Students for Fair Admissions’ position, and the Department of Justice in the Biden administration may not be supportive,” Mortara acknowledged. “I don’t think that it’s going to impact whether or not there’s further review of the case in the Supreme Court or how the Supreme Court would rule if they took the case.”

Outside experts said it remains unclear how a move by Biden’s Justice Department to pull support for SFFA would impact the legal proceedings.

Vinay Harpalani, a law professor at the University of New Mexico, said he thinks such a move would make it “slightly less likely” that the court will hear the case, “if anything.”

“It’s sending a bit of a message that the Biden administration’s DOJ is on the side of affirmative action, they’re on the side of Harvard, they’re going to help make these arguments. And the political winds have gone that way a little bit,” he said.

The Justice Department — under then-President Donald Trump — originally filed its lawsuit against Yale in October 2020. A “notice of voluntary dismissal” filed Wednesday morning in Federal District Court in Connecticut announced the Justice Department’s decision to dismiss the suit “without prejudice.” A suit dismissed without prejudice allows the plaintiff to file a subsequent suit against the defendant on the same grounds.

The Justice Department’s decision to withdraw the case follows its two-year investigation into Yale’s admissions practices. In August 2020, the investigation found that Yale’s practices were in violation of Title VI of the 1964 Civil Rights Act, which bans institutions receiving federal funding from excluding or discriminating against people “on the ground of race, color, or national origin.” On Wednesday, the Justice Department rescinded its notice finding Yale in violation of Title VI, though the department’s original inquiry remains open.

The DOJ under former President Donald Trump supported Students for Fair Admissions in its lawsuit accusing Harvard of discriminating against Asian Americans in its admissions process. By Caroline S. Engelmayer

The DOJ’s move to drop the Yale lawsuit comes before Biden’s nominees for attorney general and assistant attorney general for civil rights — Merrick B. Garland ’74 and Kristen M. Clarke ’97 — have been confirmed by the Senate. Clarke has been supportive of race-conscious admissions policies in the past.

“I would have been surprised if the Justice Department continued on with this lawsuit” under the new administration, said Theodore M. Shaw, a law professor at the University of North Carolina at Chapel Hill.

Harpalani, the UNM professor, said he expects the DOJ to file a brief in support of Harvard should the Supreme Court take up the case.

Yeomans, the former Justice Department lawyer, wrote that the DOJ is often hesitant to make major changes early in a new administration “to avoid the appearance that its enforcement decisions are driven by politics rather than law.” Yeoman noted, though, that views on affirmative action have “long been a defining legal disagreement” between Democrats and Republicans.

“President Biden ran on a commitment to racial justice, including the dismantling of structural racial discrimination,” Yeomans wrote. “He has charged his entire administration with pursuing those efforts. It was inconceivable that DOJ would continue its effort to weaken the ability of universities to create diverse and inclusive classes.”

In a statement to other news outlets Wednesday, a DOJ spokesperson said the department dropped its case against Yale in part because of Harvard’s Nov. 12, 2020 legal victory in the SFFA appeal.

“The Department has dismissed its lawsuit in light of all available facts, circumstances, and legal developments, including the November 2020 decision by the U.S. Court of Appeals for the First Circuit rejecting a challenge to Harvard University’s consideration of race in its admissions practices,” the spokesperson wrote.

A Justice Department investigation into Harvard’s race-conscious admissions practices that began in 2017 remained ongoing as of 2019.

Harvard College spokesperson Rachael Dane declined to comment on how Harvard believes the DOJ’s move to drop its lawsuit against Yale will impact Harvard.

Following the DOJ’s dismissal of its lawsuit, SFFA announced Wednesday that it intends to file a new suit against Yale challenging its admissions policies.