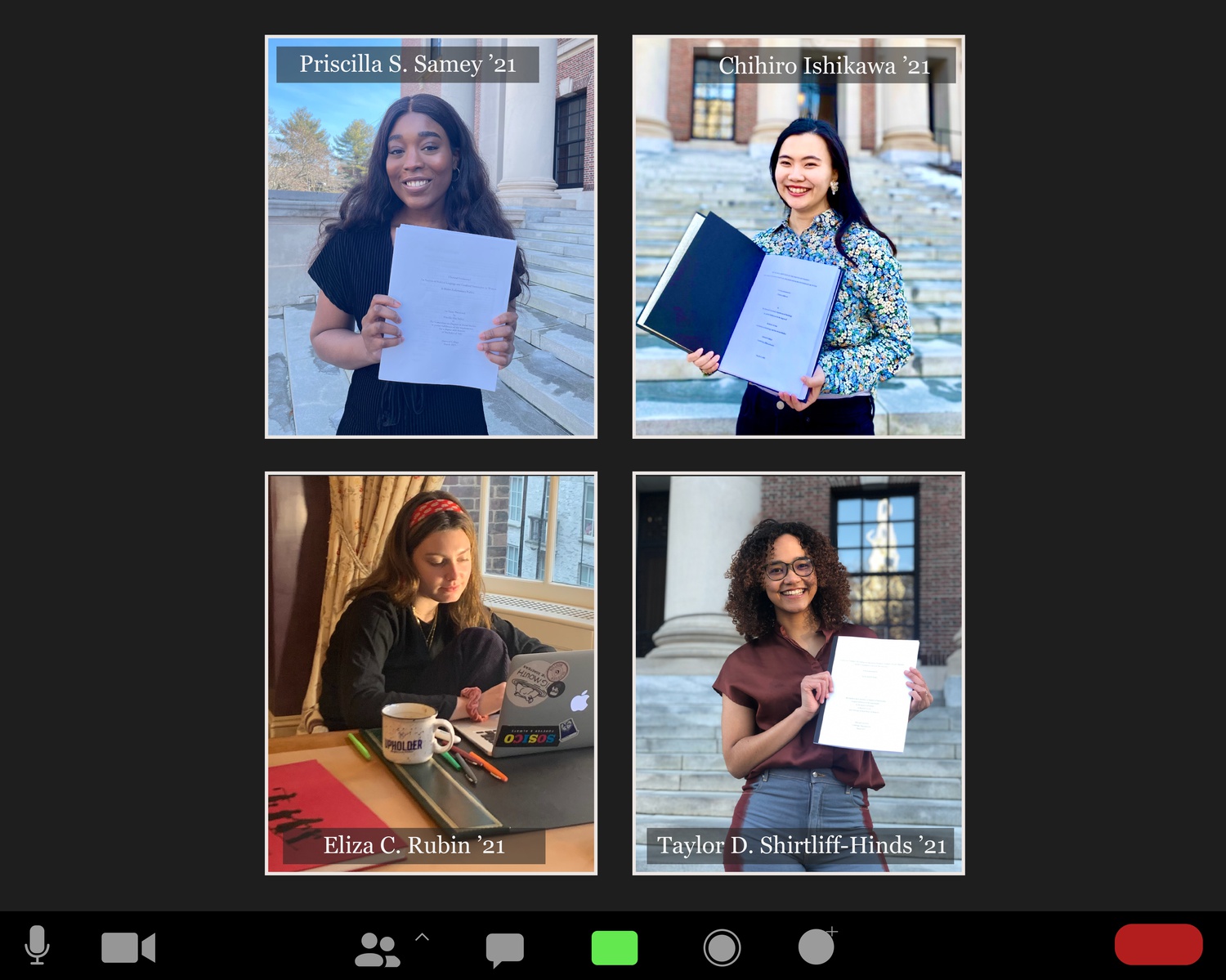 For members of the Class of 2021, virtual thesis submission is the latest in a string of quintessential experiences at the College that have been blighted by Covid-19. By Justin Y. Ye
By Alex M. Koller and Taylor C. Peterman, Crimson Staff Writers

For Julia S. Friedman ’21, the moment of submitting her thesis in Psychology felt “anticlimactic.”

“I just attached it — attached the file — and then sent it in, and I was alone in my room, and I called my mom,” she said.

For members of the Class of 2021, virtual thesis submission is the latest in a string of quintessential experiences at the College that have been blighted by Covid-19. Though the College invited seniors to live on campus in the spring, not all opted to do so, and large social gatherings remain prohibited.

“I don’t think it had the same feeling as if I were on campus,” Friedman said. “I took the night off and watched some TV, but it wasn’t that exciting.”

Diana Myers ’21 said she, too, felt she missed out on the traditional experience of submitting a thesis. In the History and Literature Department, seniors typically hand in their binders, take photographs to post on Twitter, and have a “champagne party.”

“This year, it was just me sitting in a dorm room, hitting a button on Canvas, which was kind of sad,” she said.

Eliza C. Rubin ’21, who wrote a History of Art and Architecture thesis, said it was “disheartening” not to have “any of the pomp and circumstance” of submission — especially on top of other experiences she lost throughout the thesis process.

“You don’t get to meet with your advisor, you don’t get to reserve a carrel in Widener and have all your books in front of you,” Rubin said. “It just feels in some ways like writing a really long essay.”

Friedman also said she missed the camaraderie that senior thesis writers typically experience in spaces like Widener and Lamont.

“It felt isolating because everyone’s all throughout the world just working on their theses by themselves, whereas in a normal semester everyone would kind of be coming together,” she said. “There were definitely times when I felt like I was alone doing it.”

Ethan S. Medlin ’21, however, said the unusual circumstances of his senior year did not detract from the significance of completing his thesis in Economics.

“It was an interesting experience during this time, but I don’t feel like it took away from it at all,” he said. “It honestly allowed me to focus on my thesis a bit more and just make it that much more exciting when we finished.”

For other seniors, the pandemic had a significant impact on their academic process — requiring them to complete their research in the face of canceled trips and closed labs.

Myers said she initially “felt a sense of loss” over her inability to conduct research in France.

“I was really ready to get my hands on these medieval manuscripts,” she said. “Then as I worked on it over winter break, I realized that there was enough stuff in the libraries here and online that I was able to write a thesis I was proud of.”

Limits on in-person interaction required Chihiro Ishikawa ’21, a joint concentrator in Sociology and East Asian Studies, to conduct interviews via Zoom, a platform that she said can feel “alienating.”

But Ishikawa said she was still able to connect with her subjects, Japanese and Korean feminist activists.

“I was actually able to form some emotional bonds that I only thought I could form in offline spaces,” she said. “That was really a very surprising finding for me."

Priscilla S. Samey ’21, meanwhile, made up for her inability to perform ethnographic research in England by adopting a quantitative methodology for her Social Studies thesis.

“I had to learn a bunch of new methods — I had to learn how to code — and other skills I’m going to keep even after the thesis,” Samey said. “It was hard to sort of have to start over from scratch, but at the same time it definitely made the experience more valuable.”

After losing access to an in-person lab, Taylor D. Shirtliff-Hinds ’21 had to shift her Neuroscience thesis from experimentation on mice to a computational format, which she said was “very jarring.”

“I still feel very proud of myself for making do with a tough situation, but we really had to pivot, and my project is only a fraction of what I had dreamed of completing,” she said.

With her thesis behind her, Shirtliff-Hinds said she felt “like a huge weight has been lifted off [her] shoulders.”

“This is definitely the biggest project that I’ve ever completed to date — and so it has been great to have that finished, printed, and submitted,” she said.

Reflecting on the completion of her thesis, Samey said she felt “wonderful,” despite the fact that it has “been harder to celebrate” — especially without a spring break.

“Even though I really wanted to be able to take a rest and enjoy the fact that I just finished this huge accomplishment, I still have midterms to do, I still have class,” she said.

Despite the challenges wrought by Covid-19, many seniors said they still plan to participate in one famed tradition — taking photos with their manuscripts on the steps of Widener.

“Once it’s sunnier, I’m gonna go take pictures on Widener steps, because I feel like if you don’t do that, did you really write a thesis?” Friedman said.