Some Departments Delay Senior Thesis Deadlines Due to Covid-19 Disruptions

In light of challenges posed by the coronavirus pandemic, some academic departments extended deadlines for College seniors to submit their theses this spring.
By Alex M. Koller and Taylor C. Peterman 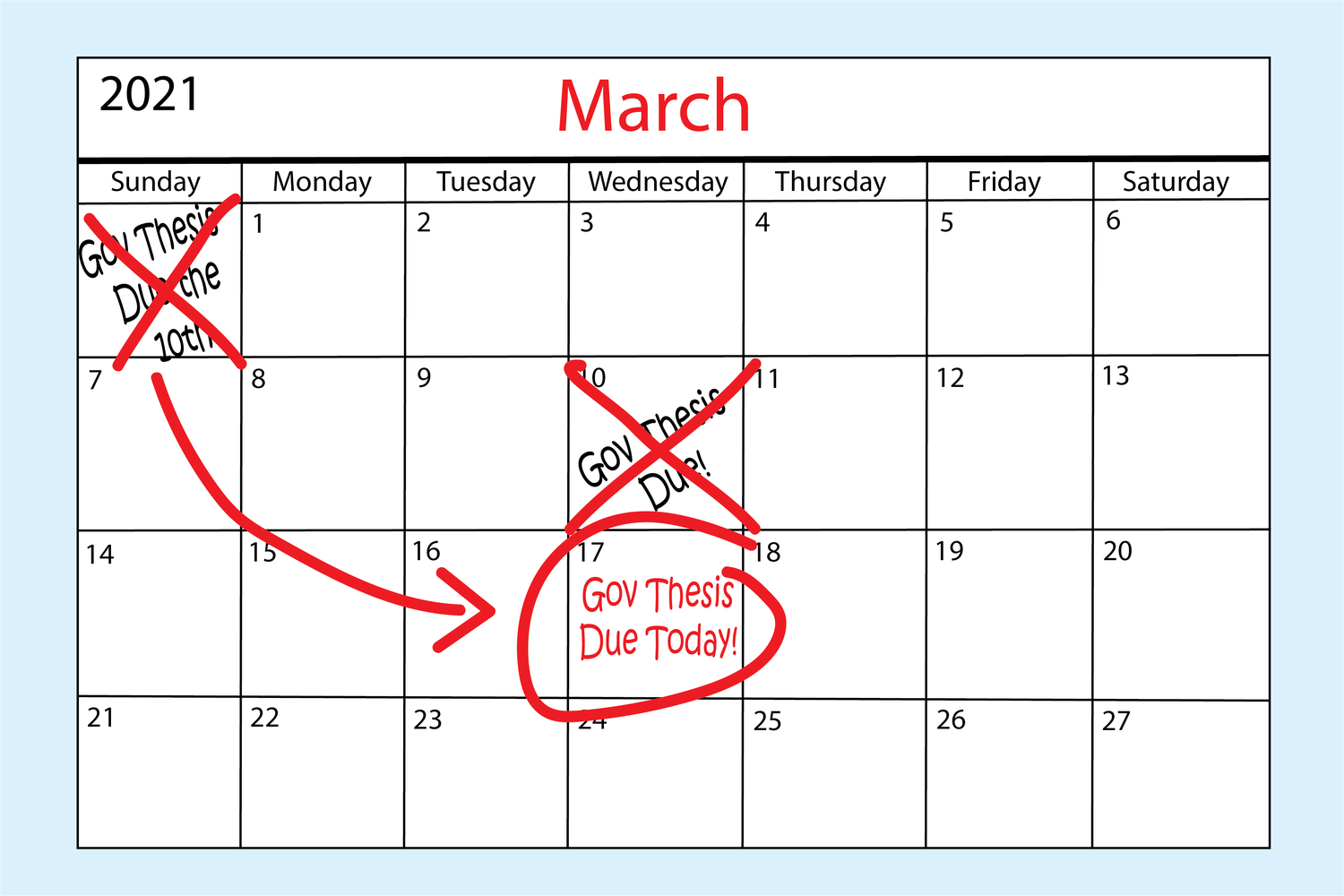 Several departments pushed back their deadlines for senior theses this spring, citing challenges posed by the coronavirus pandemic. By Ashley R. Masci

In light of challenges posed by the coronavirus pandemic, some academic departments extended deadlines for College seniors to submit their theses this spring.

Nara Dillon, director of undergraduate studies for Government, said her department received several requests for extensions and ultimately decided to extend the deadline for everyone.

“In the last couple of weeks, we’ve gotten an unusual number of requests for extensions due to Covid, last week due to the power outages, and we just decided after considering a few of these cases, one by one, the most equitable thing to do would just be to give everyone the same extension,” she said. “Some students probably had difficult circumstances but weren’t as proactive in reaching out.”

“The overall context is that the whole research process has been harder for this group than ever before,” Dillon added.

Sydney V. McDonald ’21, a Government concentrator, said she was overjoyed by the department’s decision to extend its deadline from March 10 to March 17.

“I knew that I would have something by March 10, but I wasn’t necessarily confident that it was going to be my best work or that it would be a reflection of all the work that I’ve put in. But now with this deadline I feel really good,” she said. “I went around my whole suite, like screaming in joy.”

Joshua Berry ’21, who also concentrates in Government, said Covid-19 prevented seniors writing theses from experiencing the camaraderie they would find in a typical year, working together into the early morning in Lamont Library, for example.

“I remember around thesis time, every evening, there were just packs of seniors all together, writing together,” he said. “We’re losing out on maybe the social and support structure that you would have if you’re on campus and you can go to the library with your friends and you can thesis together.”

Benjamin M.W. Ho ’21, a concentrator in the Department of Human Evolutionary Biology, said he is thankful his department granted students a two-week deadline extension through March 26. Ho said he started his project significantly later than he planned after Covid-19 health restrictions disrupted in-person lab research.

“It would have been a very tight squeeze where I would be finishing everything all at once in the last few weeks,” Ho said. “It adds up to being able to produce a final product that I can be more proud of, which means a lot.”

Daniel E. Lieberman ’86, the co-director of undergraduate studies for HEB, said he and his colleagues offered the deadline extension because they recognized students were “struggling.”

“We made an exception because, otherwise, students wouldn’t have been able to do theses,” he said.

History of Science concentrator Jaycee M. Yegher ’21 said she appreciates that the department offered seniors an extra week to turn in their theses, considering the pandemic has made research difficult.

“A lot of us really struggled with access to archival information. Being able to visit an archive in person is way different from viewing the same materials online,” Yegher said. “Having the deadline moved a week, I think, just takes the pressure off immensely.”

At the same time, other concentrations, including Social Studies, which requires a senior thesis, have not extended their deadlines.

Anya B. Bassett, director of undergraduate studies for Social Studies, wrote in an emailed statement that her department maintained its thesis deadline to ensure all grading is completed in time for graduation.

“Social Studies is not moving our thesis deadline back because we have 64 theses coming in this spring and in addition to requiring a thesis, we also require an oral exam for each student,” she wrote. “We have to make sure that we can complete thesis grading for all of our students, run 64 oral exams, and complete the honors process in time to recommend our students for graduation.”

J. Ryan Zhang ’21, a Social Studies concentrator, said an extension would be “tremendously helpful” due to challenges that have arisen since the College went remote.

“There are tons of novel challenges introduced, not just this semester, but ever since last spring when we first began our theses,” he said. “Some of those obstacles are really visible like not being able to collect data, having to rework methodologies.”

“There are also an equal number of factors that aren’t as visible,” he added.

Ella R. Necheles ’21, an Applied Math concentrator, said she feels ambivalent about her department’s decision not to push its deadline.

“I’m a little conflicted because, obviously, would love more time to work on it,” she said. “But at the same time, I also really have, for a long time, been looking forward to being done on a certain date.”

Even before the Government department announced the extension, Berry said he was confident he would be able to submit his thesis by the deadline.

“One of the jokes that I’ve sort of been telling stressed-out friends and also telling myself is that maybe the thesis won’t be finished by the deadline, but it’ll certainly be done,” he said.