‘Our Success or Failure Is Tied Together’: Grad Student Union Activism Picks Up in Biden Era

Joe Biden’s ascension to the White House has precipitated a flurry of activity by graduate student unions at private universities across the country, some of whom had avoided certain organizing efforts during the Trump administration amid fears that their cases would be used to shut down graduate students’ right to unionize altogether.
By Cara J. Chang and Meimei Xu 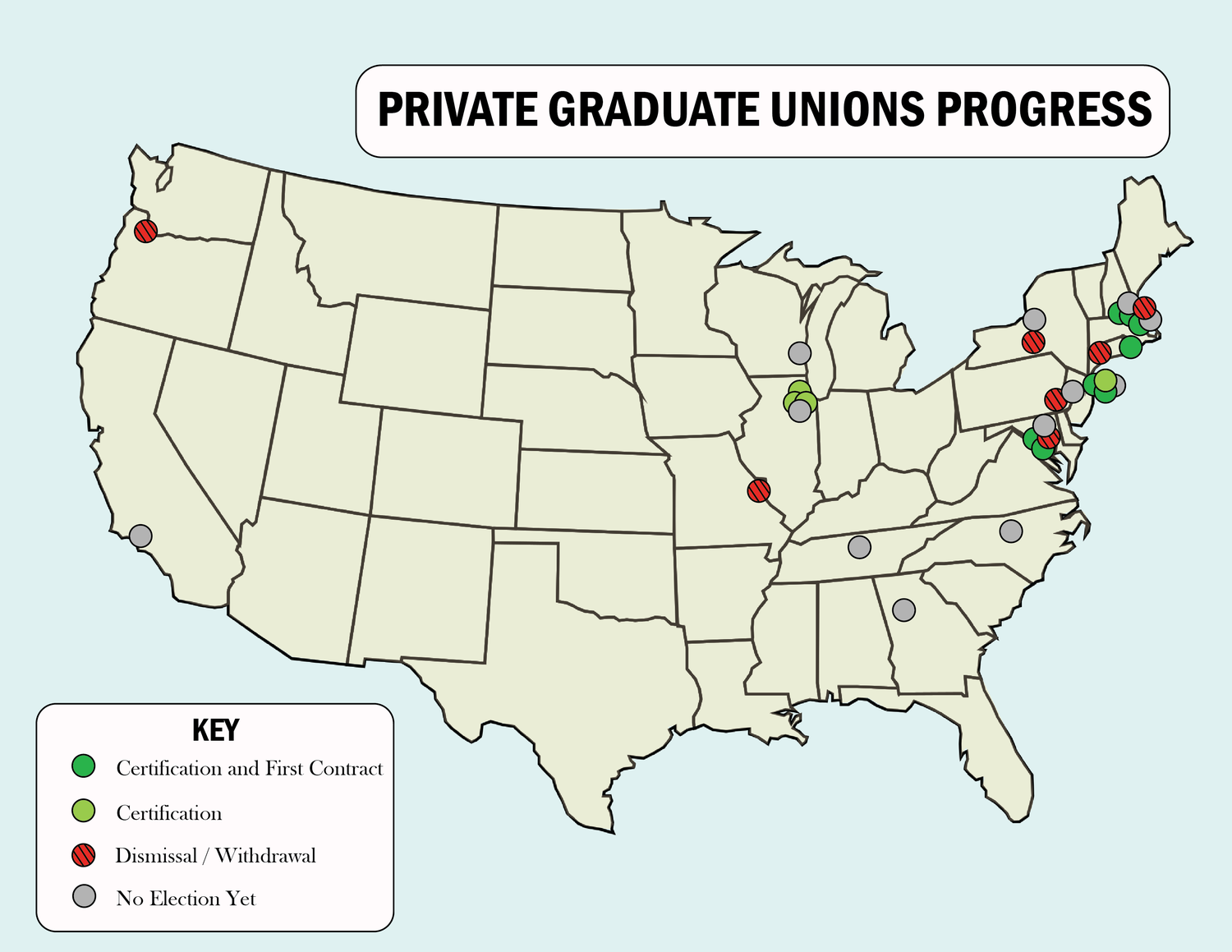 Joe Biden’s ascension to the White House has precipitated a flurry of activity by graduate student unions at private universities across the country, some of whom had avoided certain organizing efforts during the Trump administration amid fears that their cases would be used to shut down graduate students’ right to unionize altogether.

Graduate students at private universities secured the right to unionize with the National Labor Relations Board’s historic Columbia University ruling in 2016. Eight graduate student unions now have at least one contract on the books — with seven out of those eight agreements coming after the Columbia decision.

Once again, Columbia has been at the forefront of graduate student organizing in recent months. After more than two years of negotiations with Columbia administrators, the Graduate Workers of Columbia-United Automobile Workers went on strike over five contract proposals: third-party arbitration for discrimination and harassment cases, wage and stipend increases, recognition of undergraduates and Master’s degree candidates, healthcare benefits, and its demand for a union shop, which stipulates that employees must join the union and pay dues after starting work. Nationwide, graduate student unions — including Harvard’s — are campaigning for many of these same demands for their own members.

In the second week of the strike, Ira I. Katznelson, Columbia’s interim provost, sent an email to students, faculty, and staff announcing the university’s proposal for an amended appeals process for cases of harassment and discrimination. Katznelson proposed that a panel of people in “higher education and/or employment law” who are not affiliated with the university hear cases “on a rotating basis.” A group of representatives from “various constituencies,” including GWC-UAW, would help choose the panelists.

On April 3, GWC-UAW’s bargaining committee voted 7-3 to pause the strike and enter mediation with Columbia. According to Sahu, individual graduate departments are still on strike.

“We very much hope that we’re able to ultimately put on the table a strong contract which is precedent-setting for a number of peer institutions,” Sahu said. “Graduate student organizing is in some ways still in its infancy and much remains to be done.”

According to labor law experts, the Biden administration has already shown it will be friendlier than its predecessor to organized labor, particularly to graduate student organization. The NLRB, a quasi-judicial federal agency headed by a five-member board and a General Counsel who oversee labor practices, is increasingly pro-labor as Biden appoints new members.

In September 2019, the majority Trump-appointed NLRB proposed an unprecedented rule that would have disqualified graduate students as “employees” under the National Labor Relations Act of 1935. The rule, if enacted, would have barred graduate students from unionizing and effectively reversed the 2016 Columbia decision.

The proposed rule was withdrawn on March 15 “in light of competing agency priorities.” Biden has already fired the Trump-appointed General Counsel, replaced the Board’s chair with an Obama appointee, and will likely nominate two new members later this year, giving the NLRB a pro-labor majority if they are confirmed by the Senate.

William A. Herbert, executive director of the National Center for the Study of Collective Bargaining in Higher Education and the Professions at Hunter College, City University of New York, said he expects a majority Biden-appointed NLRB will encourage more graduate students to unionize.

“It is probable that, once there is a new majority on the NLRB, they will see an increase in the filing of representation petitions involving graduate assistants at private universities and colleges,” Herbert said.

In order to form a union, graduate students have to either win voluntary recognition from their university or certification from the NLRB. For the latter, once 30 percent of the student workers petition to create a union, the NLRB will hold an election. If the majority votes to unionize, the NLRB certifies the union.

Twelve graduate student unions at private universities have been certified, but four of those don’t have their first contract yet.

Dennis M. Hogan, political director of GLO at Brown University, said the Biden-appointed NLRB will be welcomed by graduate student organizers, but it isn’t a cure-all.

“Every time the [administration] changes, there’s this groundswell of organizing and people are excited to unionize,” he said. “Then a Republican gets elected and then it all goes dormant. Then another eight years pass and it comes back.”

“I think what’s different this time around is that it’s happening within the context of a national revival of union activism, so it’s not just that this small group of workers which are graduate students have a decision made about their right to organize,” Hogan added. “Instead, across the country workers everywhere are seeking this kind of power and this kind of representation.”

One reflection of this shift is renewed legislative efforts to pass the Protecting the Right to Organize Act, which encourages unionization. The House of Representatives passed the bill on March 9; if it survives the Senate, it will be “the biggest change in American labor law since 1947,” according to Herbert.

Herbert also emphasized that changes at the local and state level could have dramatic effects on the national labor movement. He added that, while past Democratic administrations have tried to pass comprehensive labor law reform, Biden is prioritizing the labor movement, including championing the PRO Act.

“What President Biden and First Lady Jill Biden have been saying about unionization is unprecedented in my lifetime,” Herbert said.

Former NLRB Chairman William B. Gould IV noted, however, that it is unlikely the bill will pass without significant edits.

Change isn’t just coming from governments: Pew Research Center polls have shown that the American public favors unions, and has for the better part of 30 years. Herbert also called the outpouring of support for the Columbia graduate student strike and the Amazon union vote in Bessemer, Ala., manifestations of broader pro-labor sentiment sparked by growing awareness of income inequality, job insecurity, and power imbalances in the workplace.

The real question, Herbert concluded, is how universities will respond to graduate students’ renewed petitions and the increasing support for union organizing from local governments, activists, and other unions.

Gould said he expects private universities to continue resisting unionization efforts. While they are exposed to pro-labor pressure from the public, students, and even politicians, Gould said “universities are businesses.”

“Many of them are likely to fight [the graduate student organizers] just as ferociously as they have done already,” he said.

The Road to Recognition

In particular, she said GSOC-UAW members — especially those like herself who haven’t yet participated in a strike — can learn from the graduate student worker strike at Columbia as the NYU union prepares for next steps following its strike authorization.

“Learning from the Columbia experience that students have been overwhelmingly supportive of graduate workers who have chosen to go on strike has given confidence to many teachers at NYU to begin having conversations with their students about what the implications of a strike would be for them,” she said.

“I would say the grad labor movement is tightly-knit in that way,” he said. “Many of these conversations happen informally. It’s like, I have a friend at Yale and I’ll reach out to them or I know somebody who is involved with the union at Harvard, so I’ll talk to them.”

As more unions win recognition and first contracts, Hogan said he anticipates those connections will become more institutionalized. Right now, he said, GLO is closest to the Georgetown Alliance of Graduate Employees because the two unions are under the same parent organization, the American Federation of Teachers, and they have had the most similar trajectories — both unions ratified their first contracts last year.

Dominick Cooper, the lead organizer for humanities and languages at GAGE, said remote organizing has made inter-union conversations more accessible. He said virtual discussions and panels have also allowed him to see the differences in circumstances between graduate unions.

Graduate student organizers who are still working towards official recognition for their unions noted that successful contract agreements and Columbia strike — as well as one at Harvard in December 2019 — provide guidance. Nathan K. Ellstrand, an organizer at Loyola Graduate Workers’ Union at Loyola University Chicago, pointed to the example set by Columbia’s 2016 recognition and GAGE, which, like LGWU, is a graduate student union at a Jesuit institution.

Columbia's graduate student union went on strike from March 15 to April 5 after more than two years of contract negotiations with Columbia administrators. By Courtesy of Tiffany Yee-Vo

While GAGE has gained voluntary recognition from its university, LGWU has yet to do so. On Oct. 17, 2017, Loyola denied LGWU recognition, arguing that graduate students are not “employees” under the NLRA. Ellstrand said he is wary of a Jesuit university like Loyola arguing that its graduate student workers would be classified as religious workers, barring them from unionization.

“[GAGE] sets precedent that there can be a grad worker union at a Jesuit university, and that really is exciting,” Ellstrand said.

“They’ve also been a role model in just how dedicated and organized and effective they are,” he said. “I think that we’ve learned a lot.”

Sarah J. Reibstein, a Princeton Graduate Student United organizer, also noted that PGSU was following the Columbia strike closely, as she foresaw PGSU running into similar problems as GWC-UAW in getting Princeton to “meaningfully bargain.”

Both Mahoney and Reibstein said their unions circulated the GoFundMe for GWC-UAW’s strike hardship fund and news about digital and in-person picketing at Columbia. More broadly, graduate student organizers emphasized the interdependence of the graduate student movement.

Elisa Purschke, another PGSU organizer, added that graduate students have been circulating resources and coordinating tactics for years, and this has only picked up during the pandemic. For example, on May Day last year, graduate students at more than 75 public and private universities, including Harvard, Princeton, and Yale, protested austerity measures in higher education.

Part of that solidarity, Mahoney said, comes from the fact that graduate student unions are a legally and economically precarious category — nowhere in federal law are graduate students explicitly given the right to unionize.

“We can really see tangibly how our success or failure is tied together,” he said. “We’re all doing a similar job for universities and we’re exploited in similar ways, and that goes beyond the student bodies at any individual school.”