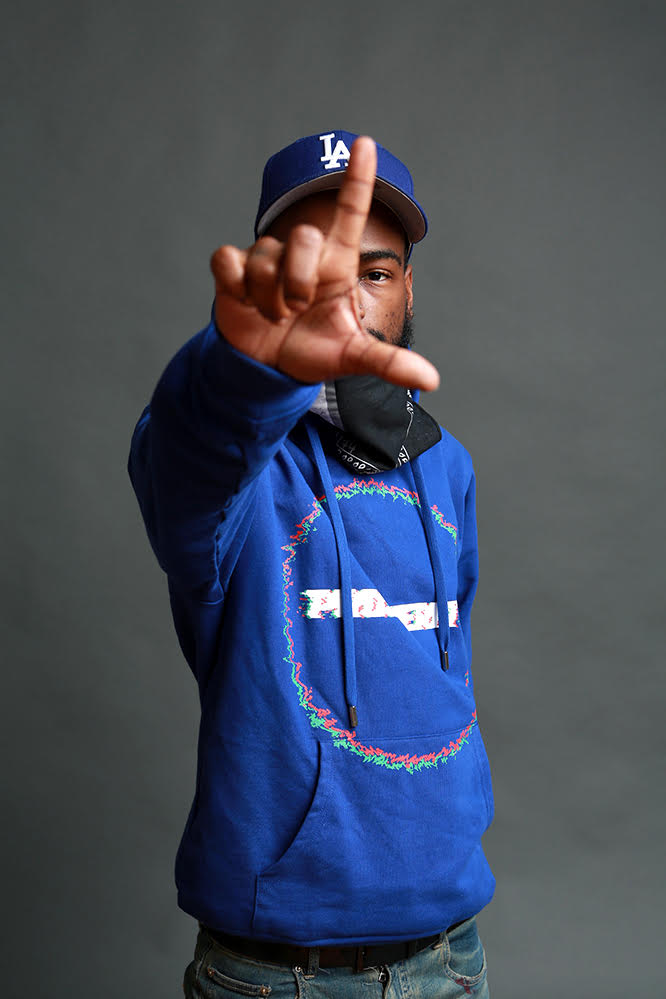 In mid-July, a pair of bus-stop billboards featuring rapper ANKHLEJOHN’s face and name were installed at two locations in the artist’s hometown of Washington D.C.

The ads were part of a Spotify initiative to highlight musicians from the Washington metropolitan area including D.C. MCs like ANKHLEJOHN and DMV artists like Rico Nasty and Ari Lennox.

According to ANKHLEJOHN, being chosen for the ad campaign represented a chance to reach new listeners and strengthen his brand, except for one thing: Spotify misspelled his name on the ad as “AHNKHLEJOHN.”

Rather than take the mistake personally, however, ANKHLEJOHN embraced his partnership with Spotify as an affirmation of years of hard work as an independent artist and validation of his prowess as a lyricist.

“I was just so honored that I got the opportunity to have my face right there,” the rapper said in an interview with The Harvard Crimson. “I was still happy to post it and receive the love from it. I wasn’t embarrassed. It was still a really big moment for me.”

The rapper added that he felt such gratitude f0r the recognition in his hometown that the first sight of the billboard — even though misspelled — brought him to tears.

“I get shown love in real life too,” ANKHLEJOHN said. “Everything is going pretty good. I’m still gonna raise it to a higher level and we still have work to do, but so far it’s been pretty lucrative.”

A few days after discovering the spelling error, ANKHLEJOHN contacted the Spotify team and the billboard was fixed by the beginning of August. The rapper says that he feels nothing but appreciation for the ad placement.

However, the rapper quipped that he may have been better off going by his old rap name “The Golden Child,” after the 1986 Eddie Murphy movie, which is much harder to misspell than ANKHLEJOHN.

Over the past several years, ANKHLEJOHN has established himself as one of the best underground rappers out of D.C., through his high-release output of 90s-inspired mafioso raps with assists from the likes of former Odd Future affiliate Navy Blue, Big Ghost LTD., and Pink Siifu.

ANKHLEJOHN said he prefers to work alone but is drawn to collaborate with artists with whom he has a genuine personal connection, like Da$H.

“My stuff came across his radar and he took a liking to it and I linked up on some man shit — we ain’t like those Internet-type n*****,” ANKHLEJOHN said. “We have a lot in common. We’re both new fathers and I've been a fan of bro for a long time. There was just a mutual respect.”

After meeting in person for the first time last year, ANKHLEJOHN said that he was thinking about reaching out to Da$H to make a few songs together when the New Jersey rapper suggested that they make the album that would become “Honey Sweeter than Blood.”

“After the first song was done, we realized we could definitely make classic shit,” he said. “And that's exactly what happened: that first song went on, the second song went on, and then by the third song, we were in motion. He would go in the booth, then I would go in. It was amazing.”

ANKHLEJOHN shared that his greatest source of artistic inspiration is the music of his peers. The rapper’s most frequent collaborators span the Northeast from Da$H in New Jersey to Rome Streetz in New York City to Al.Divino and Estee Nack in Massachusetts and share ANKHLEJOHN’s zealous enthusiasm for boom-bap style raps.

“We all want the same thing,” the rapper said. “Whether you come from Lynn, Massachusetts; Washington D.C.; Richmond; Brooklyn, New York; Los Angeles, California, I mean we all relate in some aspect. We just link up.”

“We’re like The Avengers of this shit,” he added.

The rapper’s 2020 album “As Above So Below” was fully produced by LA-native Navy Blue and features guest verses from Al.divino, Richmond artist Fly Anakin, Brooklyn MC Wiki, and Da$H.

Up until this point in his career, ANKHLEJOHN said that he has primarily relied on his gut instinct for quality to network into other artists and shape his catalogue. Moving forward, the rapper hopes to channel the freedom of being an independent artist into a release schedule that maximizes his product and creativity.

“I’ve been very intuitive and it’s worked for me,” the rapper said. “I might wake up and want to drop a project. Some of my best work has come from that type of attitude, but I know that for the level I’m trying to be at, more planning is necessary for the future.”

Such planning appears to already be in the works with ANKHLEJOHN’s next album “As a Man Thinketh” on deck to release this month. The tracklist includes production credits from heavy-hitters Navy Blue, Nicholas Craven, and Griselda Records collaborator Jay Versace.

The rapper said that he hopes to play a live show at the Middle East Restaurant and Nightclub in Boston in the near future.