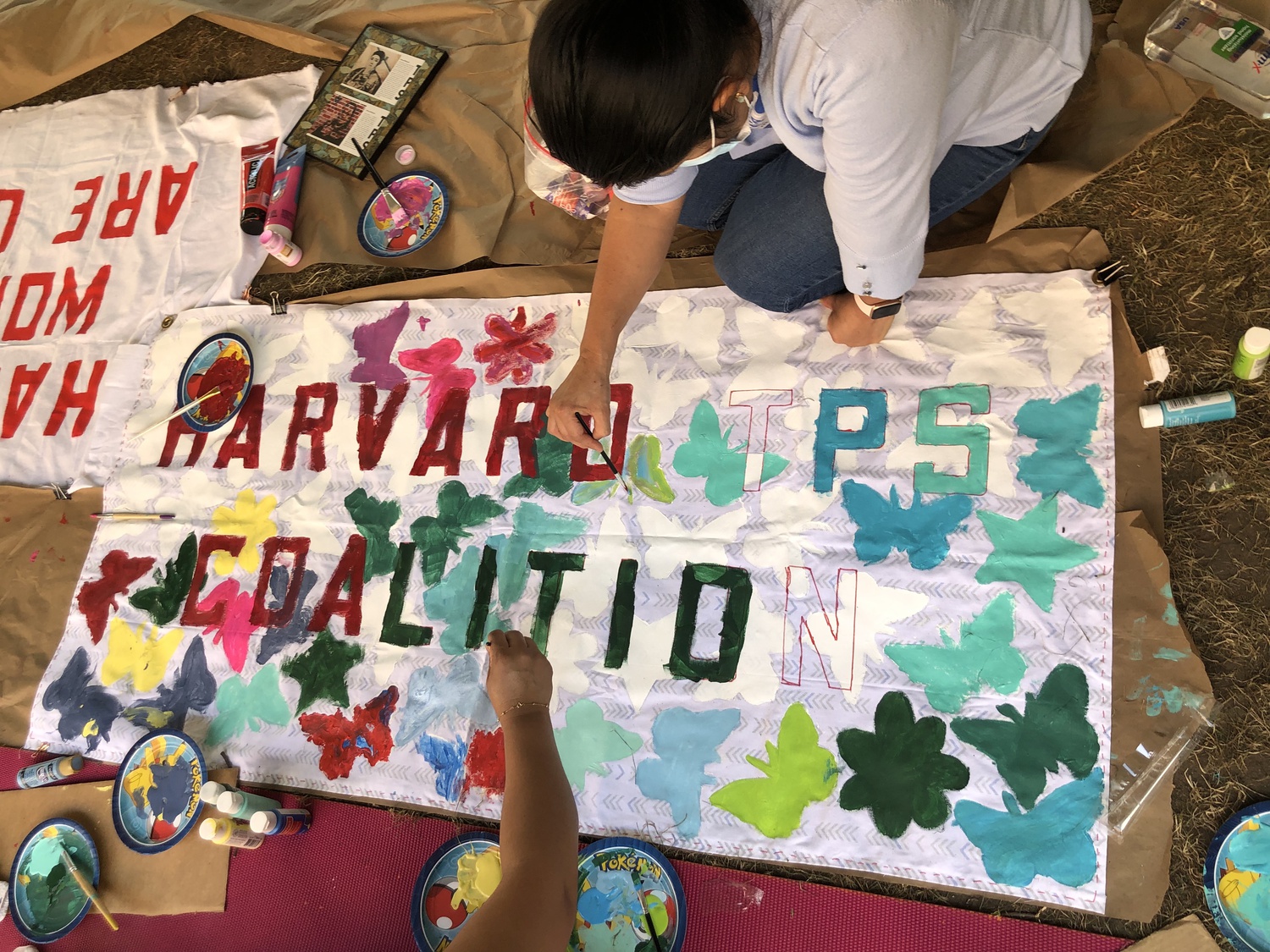 Doris Reina-Landaverde, a custodian and one of the co-founders of the Harvard TPS Coalition, paints a sign in preparation for the Sept. 20 National TPS Alliance march in Washington D.C. By Meimei Xu
By Cara J. Chang and Meimei Xu, Crimson Staff Writers

Labor activists at Harvard have renewed their calls for permanent residency for individuals with Temporary Protected Status after the Department of Homeland Security announced extensions for recipients from El Salvador, Haiti, Honduras, Nepal, Nicaragua, and Sudan on Thursday.

TPS allows certain foreign nationals to stay in the United States if they are unable to return safely to their country of origin. The extension will last for 15 months and will automatically apply to all recipients.

Before the announcement, recipients from the six countries were set to lose their statuses on Oct. 4. The extension is the result of two injunctions and one stay from federal district courts, according to the announcement. All three cases were filed after former President Donald Trump’s administration moved to restrict or terminate TPS for a number of countries in the first years of his presidency.

Doris Reina-Landaverde, a custodian and one of the five co-founders of the Harvard TPS Coalition, said she was “so happy” about the extension but ultimately will continue to “put pressure” on President Joe Biden and his administration to provide permanent residency to recipients of TPS.

“We continue to put pressure, but now TPS holders feel release because we are thinking about if we don’t have answers, we can lose our job and lose everything,” Reina-Landaverde said. “Now, 15 months, we’re happy, but it’s not what we want; we still put the pressure.”

Reina-Landaverde is a TPS holder from El Salvador. Along with Harvard Union of Clerical and Technical Workers member Genevieve Butler, UNITE HERE Local 26 member Edward B. Childs, custodian Julio A. Perez, and dining employee Martha I. Bonilla, Reina-Landaverde co-founded the coalition to advocate for protecting the TPS designation from possible termination.

According to coalition members, the Harvard Coalition will join the National TPS Alliance on Sept. 20 to march on Washington D.C. to call for green cards for TPS holders, Dreamers, and essential workers. Democrats in Congress are currently pushing for immigration reform through budget reconciliation.

“Our demand to Congress has always been permanent residency,” Perez said. “We still have to wait, probably until the end of September, to hear an answer: who stays in the reconciliation bill and who does not stay?”

Perez, who is also a TPS holder from El Salvador, added he is tired of “false promises” from Congress and is determined to win permanent residency for the more than 300,000 TPS recipients. That includes approximately 200 working at Harvard, he said.

On Saturday, the coalition held a teach-in outside the Phillips Brooks House and painted signs for the march reading “Harvard TPS Coalition,” “Home is Here,” and “Harvard Workers Are United.”

Sonia M. Acosta, a custodian and a former TPS recipient, said in an interview at the teach-in that she would like others to understand the importance of efforts to maintain TPS and obtain permanent residency for holders.

“I would like them to know more about TPS and try to help and support the people who are fighting for this, because that’s very important not only for Harvard, because Harvard has many custodians that have TPS,” Acosta said. “It’s important for the whole United States.”

The cause has received formal support from Harvard. In 2018, then-University President Drew G. Faust penned a letter to Congress, calling on lawmakers to protect TPS holders from deportation.

Last December, University President Larry Bacow wrote to Biden to encourage him to extend TPS status for immigrants in countries affected by conflicts and disasters. He also wrote to U.S. senators in 2019 to call for further protections for those with TPS.