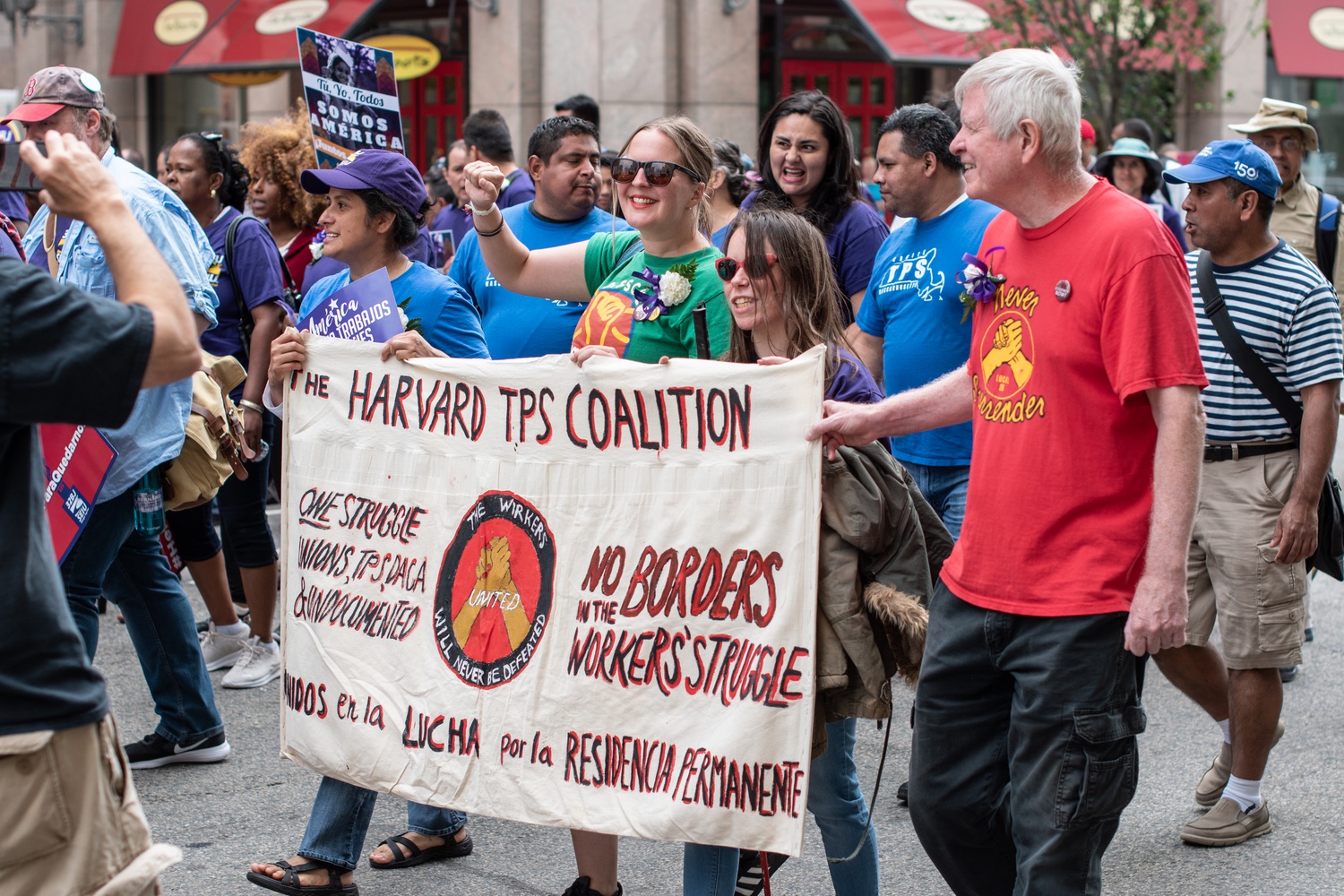 Roughly 75 people, including multiple Harvard affiliates, gathered in front of Government Center in Boston Tuesday to protest a court ruling that allowed the Trump administration to end protections for approximately 300,000 immigrants shielded from deportation under the Temporary Protected Status program.

On Monday, the U.S. Court of Appeals for the Ninth Circuit, based in California, ruled in a 2-1 decision that the Trump administration could legally terminate the program, known as TPS, for immigrants from El Salvador, Haiti, Nicaragua, and Sudan.

The ruling reverses a preliminary injunction issued by Judge Edward M. Chen of the U.S. District Court of the Northern District of California in October 2018 preventing the Trump administration from ending the protections.

Judge Consuelo M. Callahan, who wrote the Ninth Circuit’s opinion, based the court’s decision on the plaintiffs’ inability to demonstrate “racial animus” as a motivating factor in the decision to end TPS protections.

Congress created TPS in 1990 to provide a temporary reprieve from deportation to certain immigrants whose countries of origin were deemed unsafe. Currently, individuals from nearly a dozen countries are protected through the program, although U.S. President Donald Trump has sought to strip TPS status since nearly the beginning of his term in office.

Monday’s decision, though, will likely not be the last word on the subject. In light of the Ninth Circuit’s decision, the plaintiffs in the case plan to file an appeal. A potential Biden administration could reinstate TPS protections.

Nonetheless, news of the decision left some of Harvard’s TPS recipients in tears.

Doris Reina-Landaverde, a custodial worker from El Salvador who rallied the crowd at Tuesday’s protest, said the news was heartbreaking, as she recognized that the court’s decision was a major setback for her and her family.

“When I received the news yesterday, it was devastating because I had hope that the outcome would be positive,” said Reina-Landaverde, an organizer with the Massachusetts TPS alliance. “When I saw the message, it was hard, I’m not going to lie and tell you that I didn’t cry.”

“I crossed the border and survived, why should I be scared of fighting for my family, my TPS family,” she added.

Reina-Landaverde, who has been living in the United States for 20 years, also said the potential phase-out of TPS disproportionately affects essential workers.

Monday’s ruling could leave hundreds of Harvard affiliates with uncertain futures, as the decision could allow for removal procedures to start as early as January 5, 2021.

Close to 200 Harvard affiliates are TPS recipients, according to Reina-Landaverde; there may be more, she said, but many—out of fear of jeopardizing their legal status—choose not to speak out.

In early 2017, the University hired immigration attorney Jason M. Corral to provide legal counsel to undocumented students. Corral is the only full-time attorney on campus charged with addressing immigration-related issues.

But the administration’s efforts have been underwhelming, according to some Harvard TPS recipients.

“Regarding TPS, Mr. Bacow the only thing he’s done is go to Congress and talk about DACA and TPS and then did nothing else,” said Julio A. Perez, another custodial worker and TPS holder. “From him, I don’t expect anything, I expect more from the community.”

Bacow, in a written response to the Supreme Court’s June ruling on the Deferred Action for Childhood Arrivals, called on the United States Congress to act on immigration reform.

“Congress should now turn its attention to immigration reform and provide a pathway to citizenship for these young people and others, including individuals with temporary protected status,” Bacow wrote in a June email to Harvard affiliates.

Nonetheless, Perez mentioned that he was more optimistic about receiving support from Harvard students and those in the greater Cambridge area.

“I’ll tell you the truth, the support we receive from Harvard is from the community,” Perez said. “It’s from the workers, our bosses, our colleagues, the students, it’s that support that we count on.”