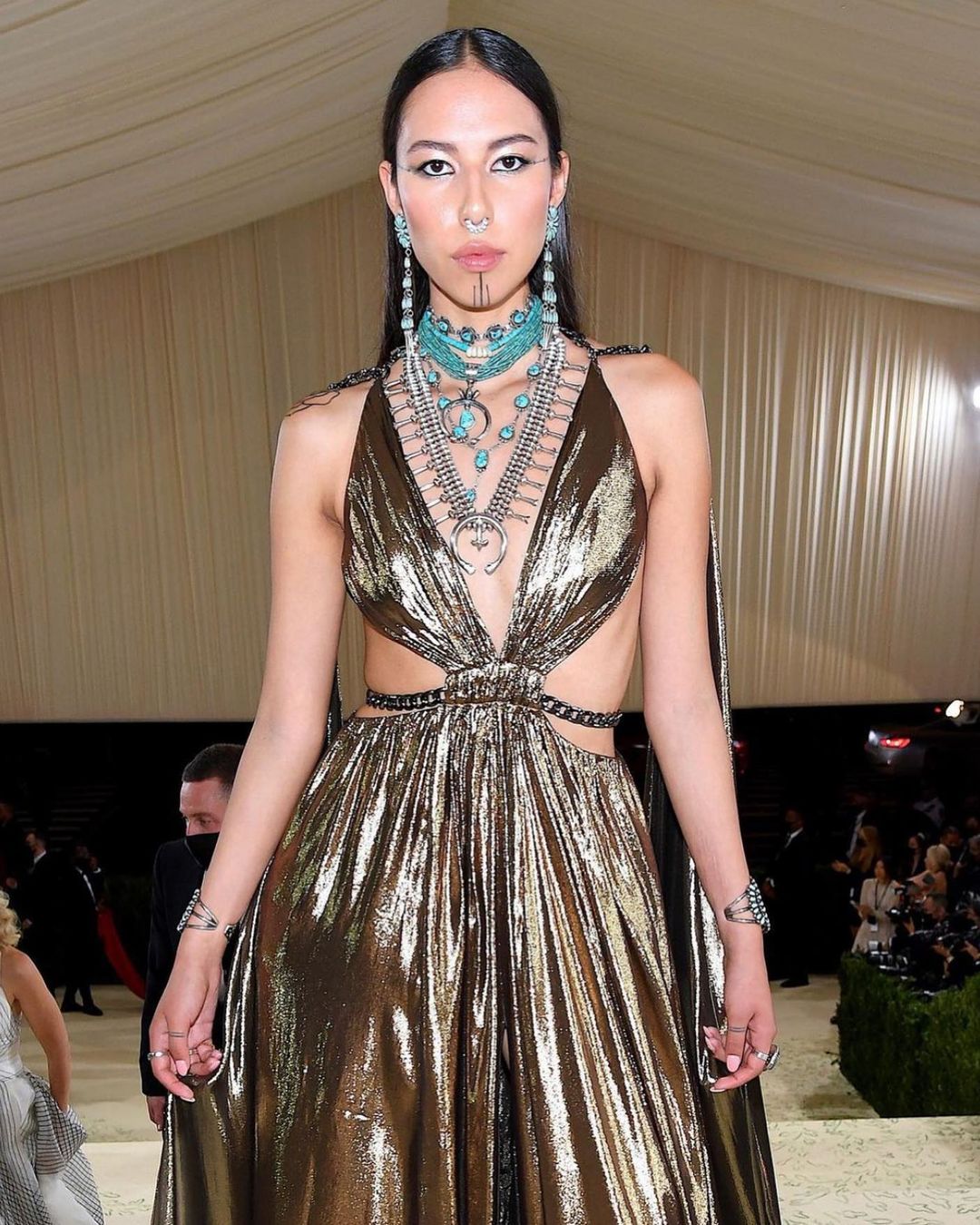 After last year’s Met Gala was cancelled due to Covid-19 restrictions, we finally saw a return on Sept. 13. Dubbed “fashion’s biggest night out,” this fundraising event for the Metropolitan Museum of Art in New York City expects guests to match the theme of the Costume Institute’s annual exhibit. This year, invitees celebrated “In America: A Lexicon of Fashion,” the first of two sections of the exhibit on American fashion, by following the dress code of “American Independence.” Here we’ve picked out the top five looks of the night.

Quannah Chasinghorse, a 19-year-old Hän Gwich’in and Oglala Lakota model making big splashes in the fashion world, wore a stunning shimmering gold dress by Peter Dundas from his recent Dundas x Revolve American Dream collection. Her gold lamé cut-out dress was complemented by a cape of the same fabric billowing away from her. In line with her desire to highlight her Indigenous culture, Chasinghorse paid homage to her connection to the Navajo Nation, where she was born and raised for some time, by wearing traditional turquoise Navajo jewelry loaned by her aunt Jocelyn Billy-Upshaw, a former Miss Navajo Nation. With this dazzling number and wonderful reminder of the nation’s first peoples, Chasinghorse marks a strong start to this list. 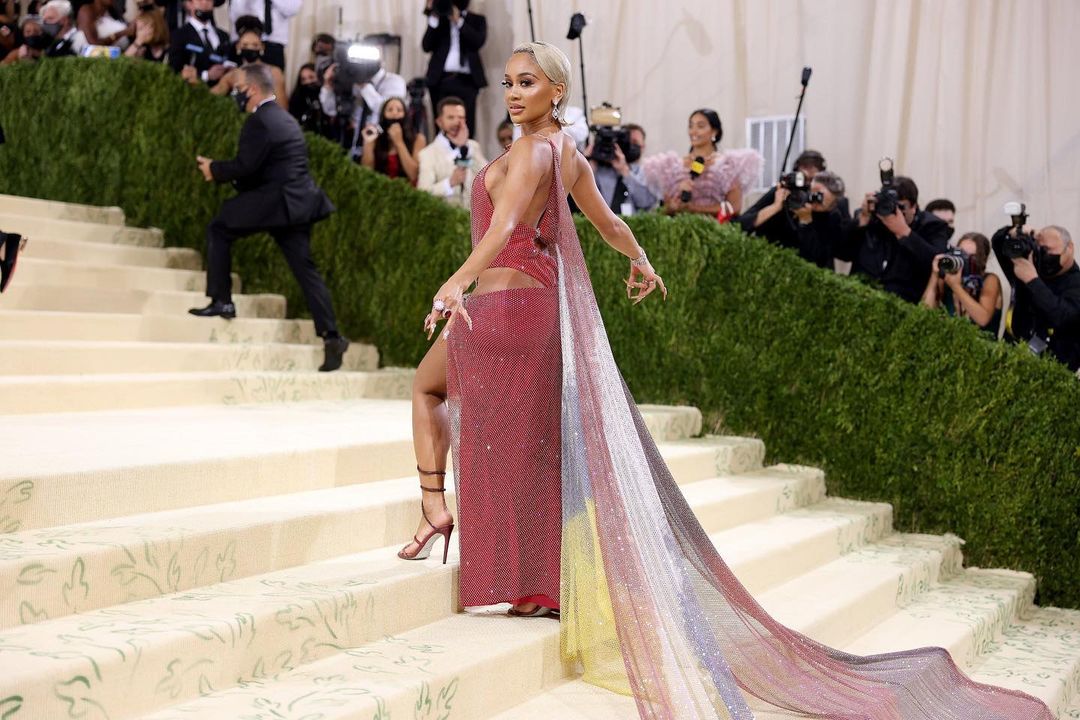 Saweetie absolutely shined in a custom salmon-colored dress that Christian Cowan reportedly designed in twenty-four hours. Tight, barely-there, and draped around her body, a diamond chain held up the incredible dress that involved the placement of 10 million crystals. Saweetie required a team of eight people and eight hours to get dressed and complete the look down to her matching hairdo peppered with sparkles. Saweetie aimed to pay honor to her heritage with two long trains flowing away from her dress, one bearing the design of the Black American Heritage flag and the other the Filipino flag, which Saweetie said is “what makes me an American girl.” 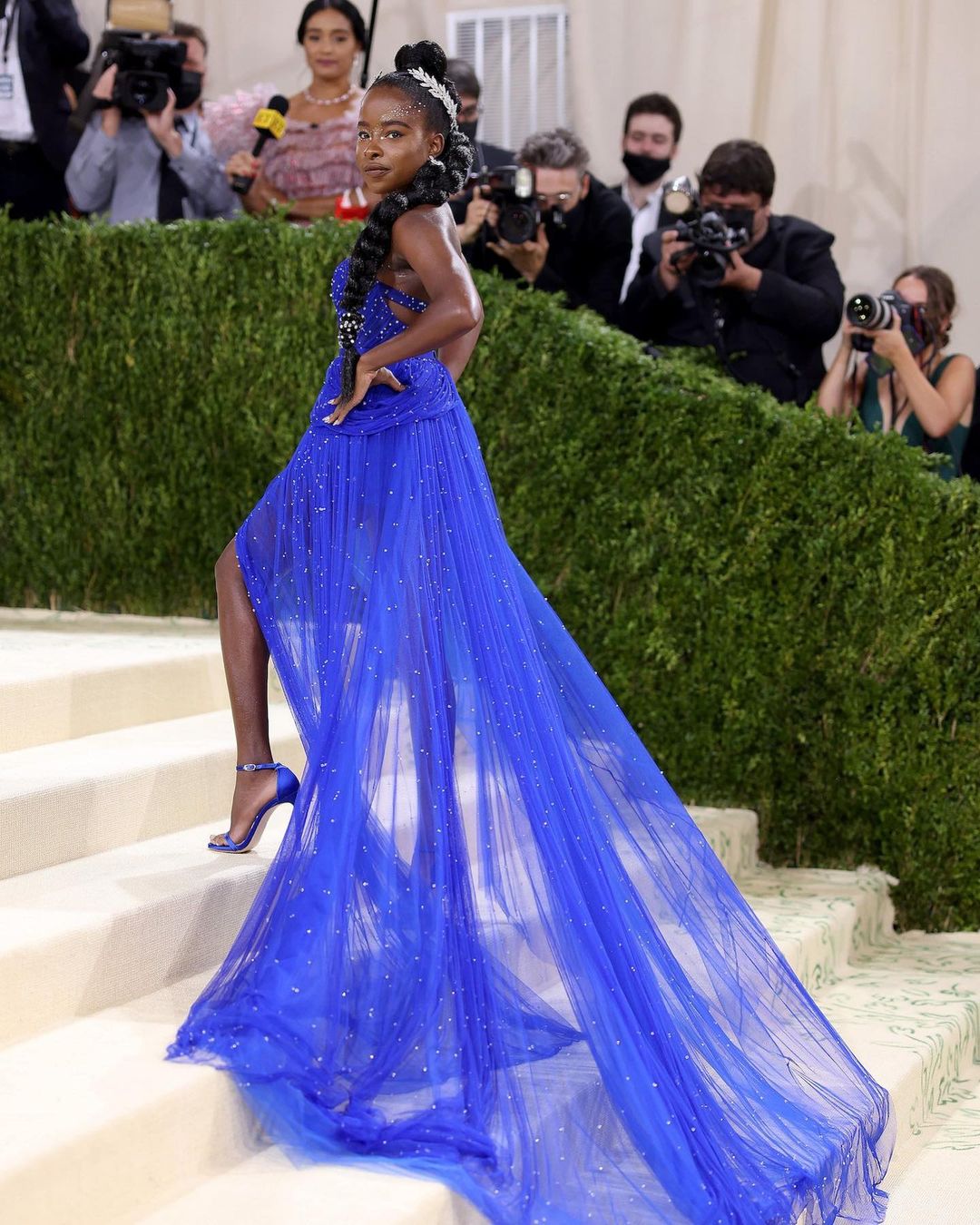 Amanda Gorman at The Met Gala 2021. By Courtesy of Met Gala @themetgalaofficial

Harvard’s very own Amanda Gorman ’20, the youngest inaugural poet in U.S. history, comes in as number three. Donning a deep ultramarine blue Vera Wang gown with a sweetheart neckline and a lovely tulle train, Gorman evoked both the American flag and the Statue of Liberty. The sparkles of her dress were a wonderful complement to the wave of stars sweeping off her face, which also brought to mind a billowing flag. In place of the Statue of Liberty’s tablet, Gorman held a clutch in the shape of a book by Edie Parker that reads “Give us your tired,” referencing a line in “The New Colossus” by Emma Lazarus inscribed at the statue’s base. For the statue’s crown, Gorman instead referenced her status as a laureate with a crown of laurels. While it would be nice if the dress were the green color of oxidized copper we know and love, Gorman’s ensemble is nothing less than statuesque! 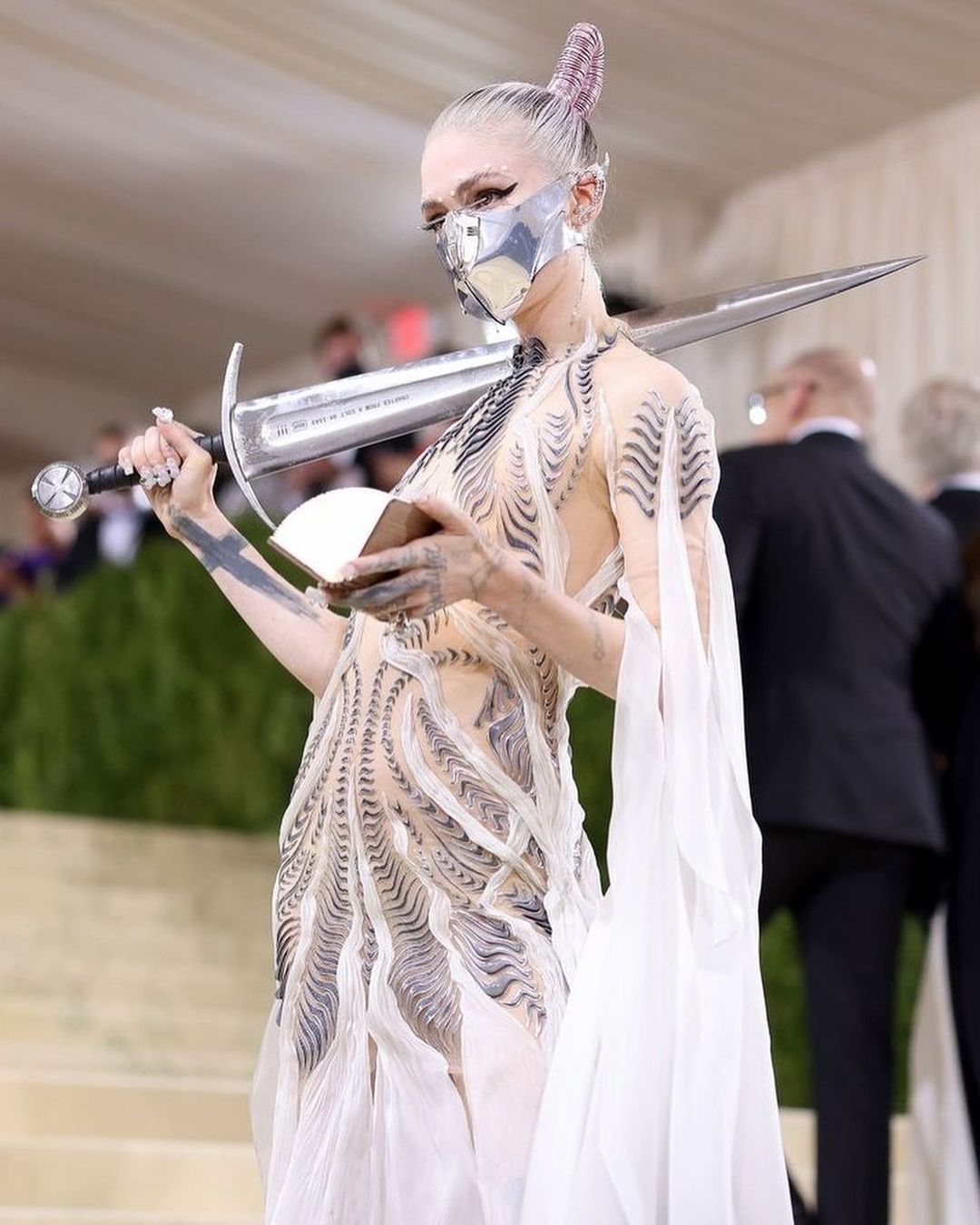 Grimes at The Met Gala 2021 By Courtesy of Grimes @grimes

The second best outfit of the night is none other than Grimes in a piece by Iris van Herpen that required over 900 hours to create. With a hand-casted, laser-cut bodice in silicone that transitions into waves of 26 meters of hand-pleated and gradient-dyed silk rippling away from her body, Grimes was nothing short of captivating. What isn’t to love about this futuristic look, from the smokey fabrics streaming away from the corset to her matching silver mask, earpieces, and headdress? To top it off, Grimes sported a bejeweled face and towered in sky-high lace-up 2017 Marc Jacobs platform boots. Ultimately what clinched this look were her three props: a chrome mask taken from the film adaptation of “Dune,” a glowing book, and a large sword made from a melted-down Colt AR-15A3. How American! 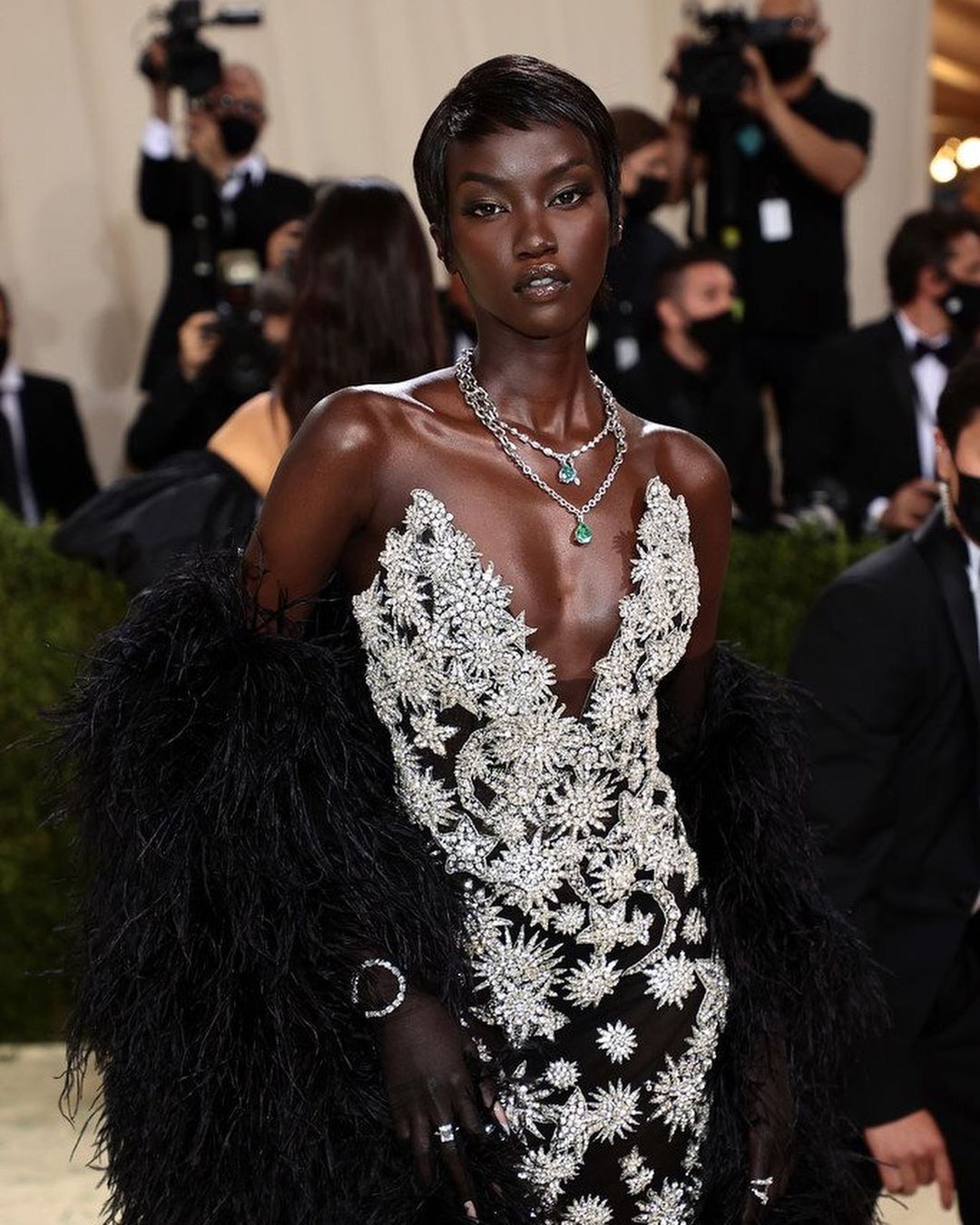 Anok Yai at The Met Gala 2021. By Courtesy of Anok Yai @anokyai

Coming in as the look of the Met Gala is Anok Yai, an American model discovered via a photograph gone viral, in a lovely black number from Oscar de la Renta’s Spring 2022 collection. Does anything really need to be said about the sheer magnificence of this dress? Yai, donning a plunging black dress hand-embroidered with countless star-shaped diamonds, was a perfect snapshot of “New Old Hollywood.” With matching embroidered sheer opera gloves, a massive, feathered boa that simply swallows her figure-hugging dress, and a pixie cut, she shines like the stars decorating her dress. This dress was reportedly inspired by Josephine Baker, an American-born singer, dancer, and member of the French Resistance and civil rights activist. This ensemble was nothing short of stellar.