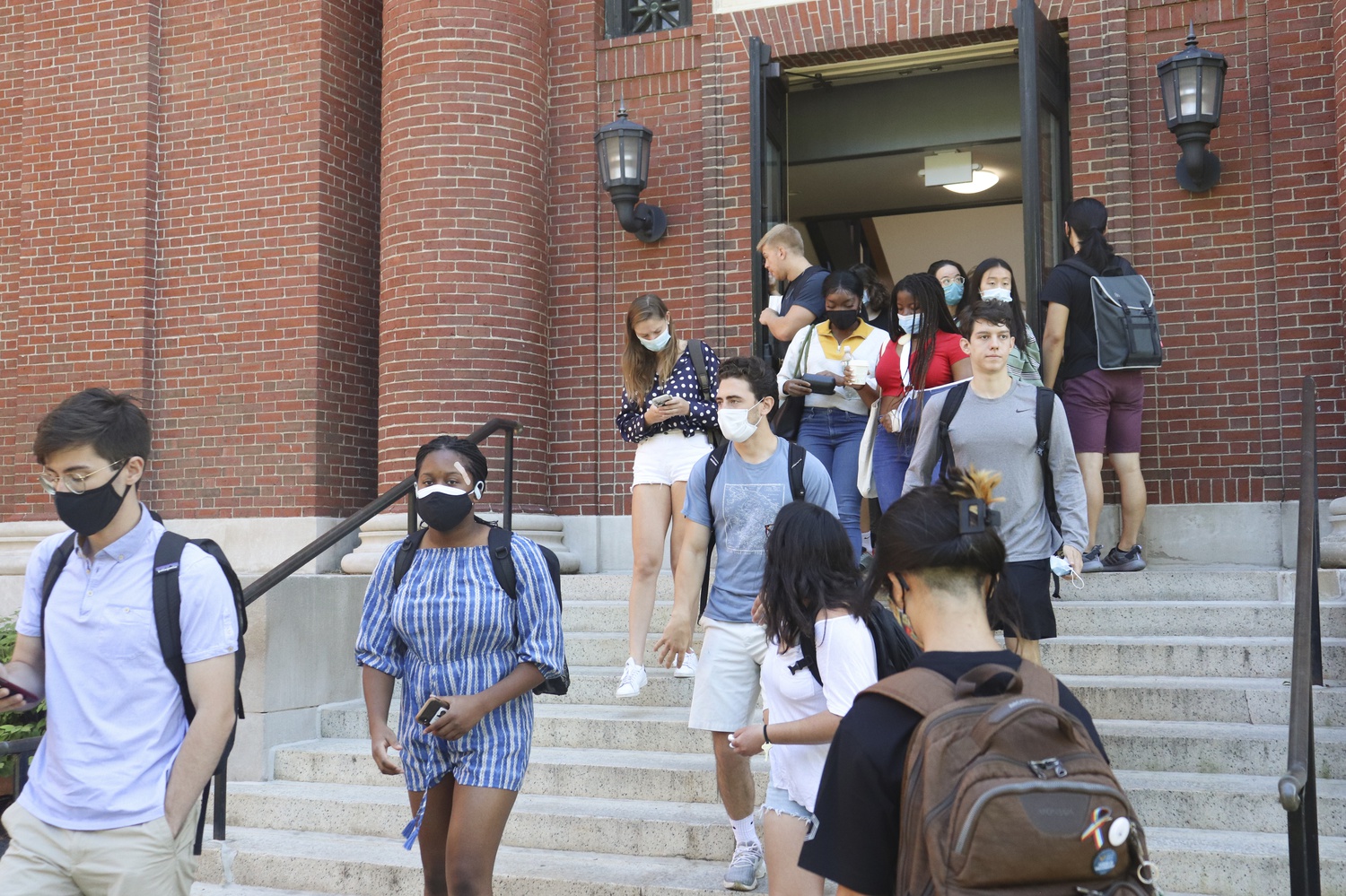 Harvard instructors were given the option to start the semester with virutal instruction. By Truong L. Nguyen
By Ariel H. Kim and Meimei Xu, Crimson Staff Writers

Some Harvard professors will hold classes online during the first week of the spring semester, citing Covid-19 concerns.

Harvard told faculty members earlier this month they would be able to hold classes remotely during the opening week of the semester, when Covid cases are expected to surge.

“When students return to campus, we expect to see a surge in cases and we realize that it may be difficult for instructors to manage large numbers of students in isolation all at the same time,” Dean of Undergraduate Education Amanda J. Claybaugh wrote in a Jan. 18 email to faculty members.

But the flexible policy will not last: Courses must be taught in-person for the remainder of the semester unless instructors obtain special permission, Claybaugh wrote.

Covid cases on Harvard's campus have surged to their highest rates ever this month. During the first week of January, when most students were away from campus for winter break, Harvard reported 977 positives, shattering its previous record — which was set just three weeks prior. Still, the University opted to bring students back for an in-person spring semester, citing the decreased risk of severe illness the Omicron variant presents to most students.

Several instructors decided to take advantage of the policy, forgoing classroom instruction in favor of Zoom for the first week.

Harvard School of Public Health Professor Susanne J. “Sue” Goldie wrote in an email that she decided to teach Gen Ed 1063: “World Health: Challenges and Opportunities” online for the first week to reduce risk of infection and create greater learning equity among students, some of whom might be in isolation after testing positive.

Goldie also wrote that she wanted to reduce the risk of Harvard affiliates passing along the virus to vulnerable family members and avoid contracting the virus herself.

All instruction for Chinese BB: “Elementary Modern Chinese” and Statistics 171: “Introduction to Stochastic Processes” will also be held online for the first week.

“This could actually help us see each other's face for the first time,” said Chinese BB course head Yuxiao Du.

Statistics Professor Subhabrata Sen said some students told him they might not be able attend the first lecture of his course in-person.

Some classes will adopt a hybrid approach. Government Professor Sarah J. Hummel will host in-person classes at the normally scheduled time, but will also re-teach the lectures online in the evening for Government 1249: “Authoritarianism.”

Claybaugh wrote in her email to the FAS that instructors may hold classes online during the rest of the semester if over 40 percent of students in the course go into isolation at the same time.

Claybaugh also asked instructors to make a plan for maintaining course continuity through potential disruptions, though she noted that they are not obligated to offer hybrid instruction.

Taruna Singh ’24 said she believed students did not receive enough information about why some professors elected to make courses online for the first week and not others.

“If my Chinese Literature class is going online and my other classes aren't, I don't see how I'm supposed to receive any sort of protection from the infectious nature of the virus,” she said.

Harvard spokesperson Alixandra A. Nozzolillo pointed to measures taken by Harvard University Health Services to reduce the risk of transmission.

For students who test positive after the first week, some courses will offer a live virtual option.

History 97: “What is Urban History?” and Government 40: “International Conflict and Cooperation” will allow isolating students to join the class on Zoom.

For those students unable to Zoom, Government Professor R. Stephen Chaudoin said he will also offer students a recording, though he does not want students to “rely on recordings as a crutch.”

“I think engaging and talking and seeing things live is really important,” he said.

Many instructors and students remain hopeful that they will return to in-person class after the first week.

“My sincere hope is that this turns out to be just a precautionary measure, that we can move forward with normal in-person classes starting next week,” Sen said.