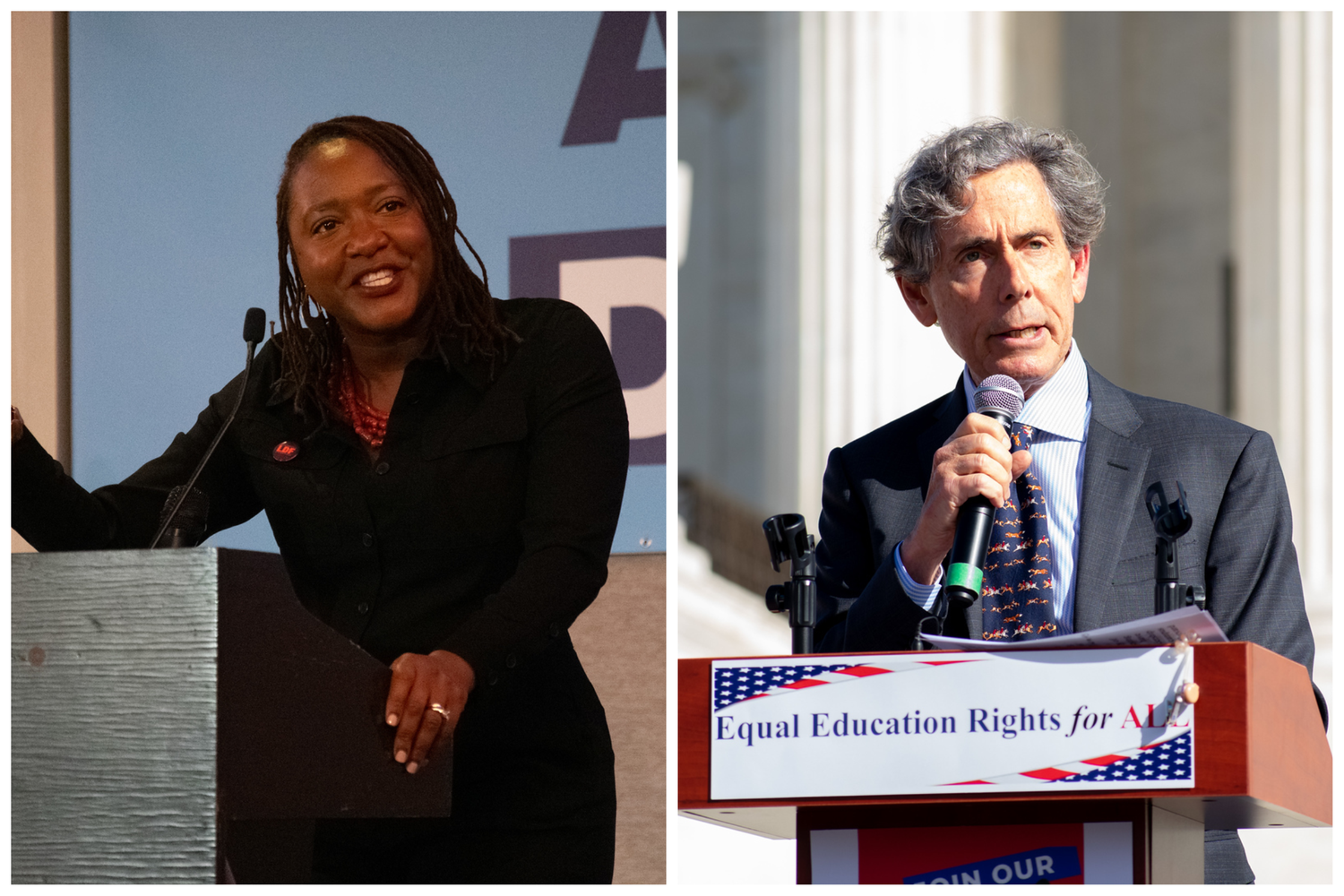 WASHINGTON — Students and advocates on both sides of the affirmative action debate descended on the nation’s capital on Sunday for dueling rallies ahead of Supreme Court oral arguments in a pair of lawsuits that could end race-conscious admissions in American higher education.

More than 200 people flocked to the Grand Hyatt Hotel in downtown Washington for a pro-affirmative action rally called Affirm Diversity. Across town, the Asian American Coalition for Education hosted an anti-affirmative action demonstration on the steps of the Supreme Court, featuring Students for Fair Admissions founder Edward J. Blum.

For the last eight years, Blum has spearheaded legal efforts to end race-conscious admissions at Harvard and the University of North Carolina — the latest in his decades-long campaign to outlaw affirmative action. The Supreme Court will hear oral arguments for both cases Monday morning.

“We are here today because, as Justice Sotomayor wrote in a 2014 dissenting opinion, race matters,” Nelson said. “Race matters, for reasons that are not only skin deep, that cannot be discussed any other way, and that cannot be wished away.” 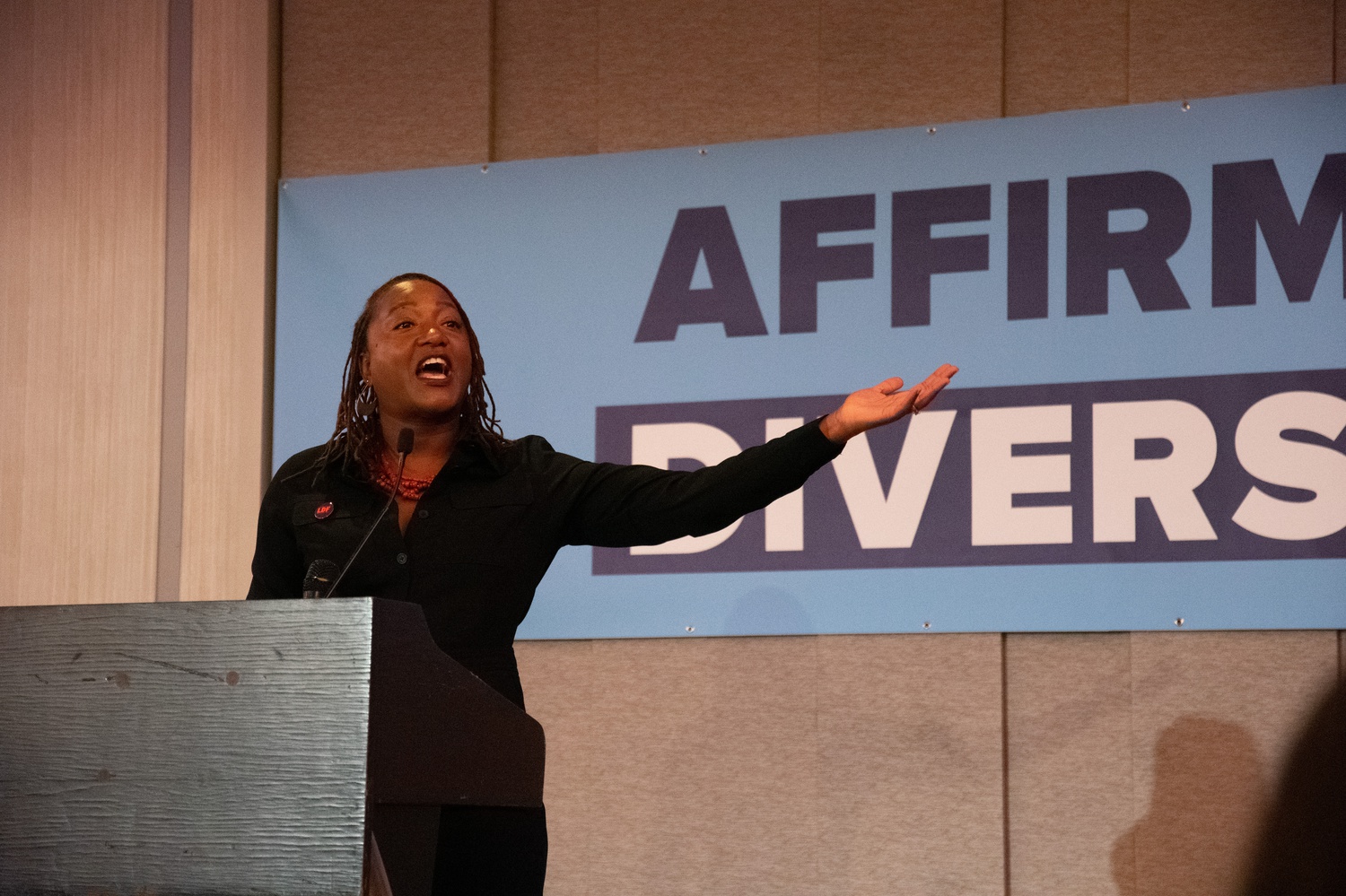 Harvard freshman Isabella P. John, who traveled to Washington to attend the event, said she felt called to show her support for affirmative action in part due to the generations of activists who have defended the practice.

“We wouldn't be doing our part for the future generation to not be here like people before us have done,” John said. 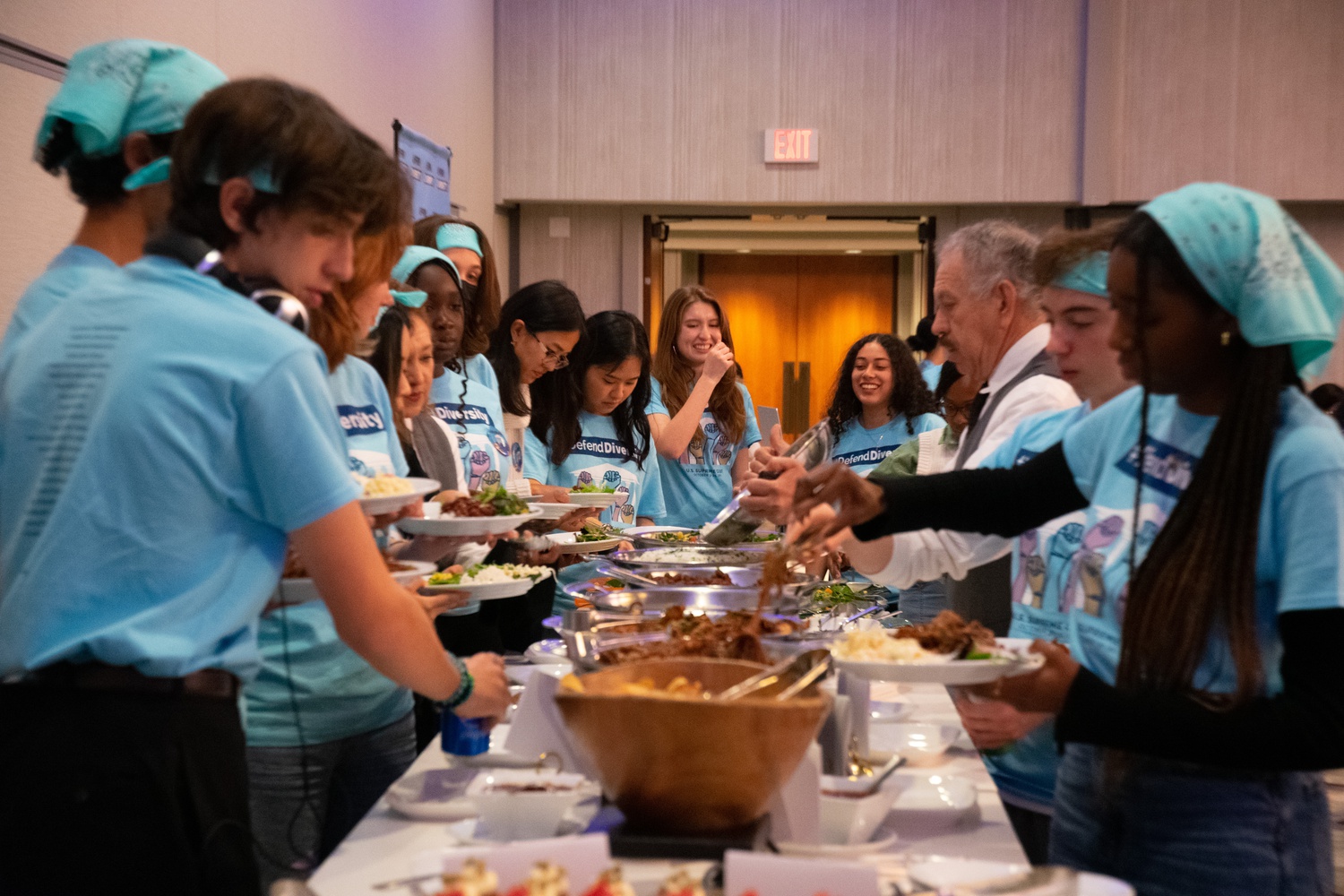 College students from around the country traveled to Washington on Sunday to rally in support of affirmative action. By Julian J. Giordano

“They also knew the kind of environment that I was coming from, and made an informed decision about what I must be to have gotten here in spite of all those experiences,” she added.

Harvard’s Black Students Association bussed and flew out more than 100 students to attend a Legal Defense Fund-sponsored event scheduled to be held in front of the Supreme Court on Monday. David E. Lewis ’24, political action chair of the BSA, said in his speech that student activists will continue to advocate for affirmative action programs even if the court rules against Harvard.

“I am not afraid or worried because I know that regardless of the outcome of this case, our struggle will not end here, nor will it end when the court's decision is released,” Lewis said. “This is still just the beginning.”

Hundreds of protesters attended the rally staged by the Asian American Coalition for Education in support of SFFA at the same time as the Affirm Diversity event. Activists, including college and high school students, held signs on the steps of the Supreme Court calling for an end to affirmative action in higher education. 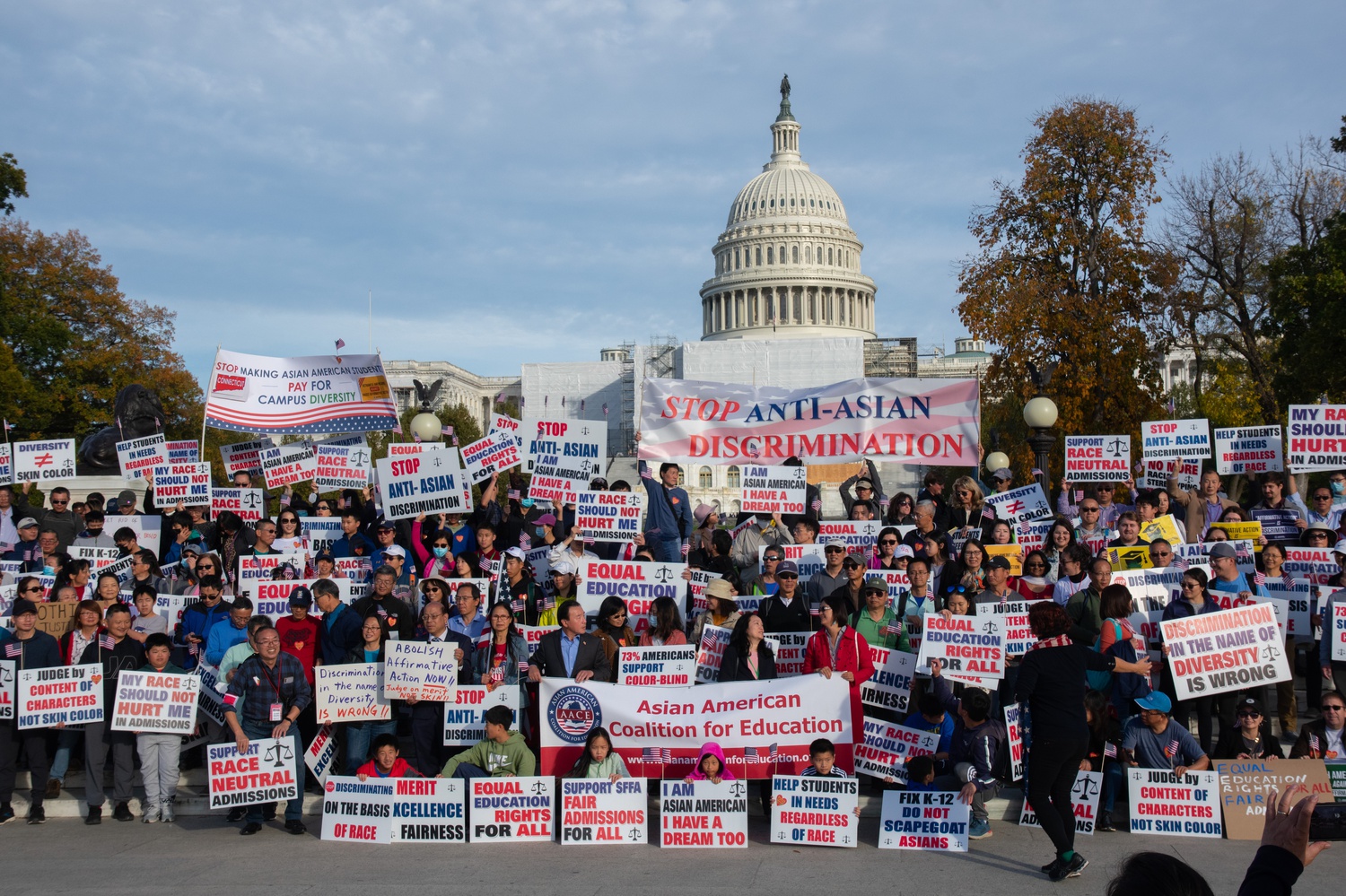 AACE President Yukong “Mike” Zhao said in a speech at the rally that affirmative action has harmful psychological impacts on Asian American students by creating a pressure to work harder for admission.

In a speech at the rally, Blum, the SFFA president, described race-conscious admissions as “divisive,” saying that by considering race as a factor, schools pit applicants against each other.

“It is a moral failure that our most competitive universities place high schoolers — like the kids we have just heard from — on racial registers and tell the world that their skin color affects what they think and what they know, and what they like and what they don't like.” 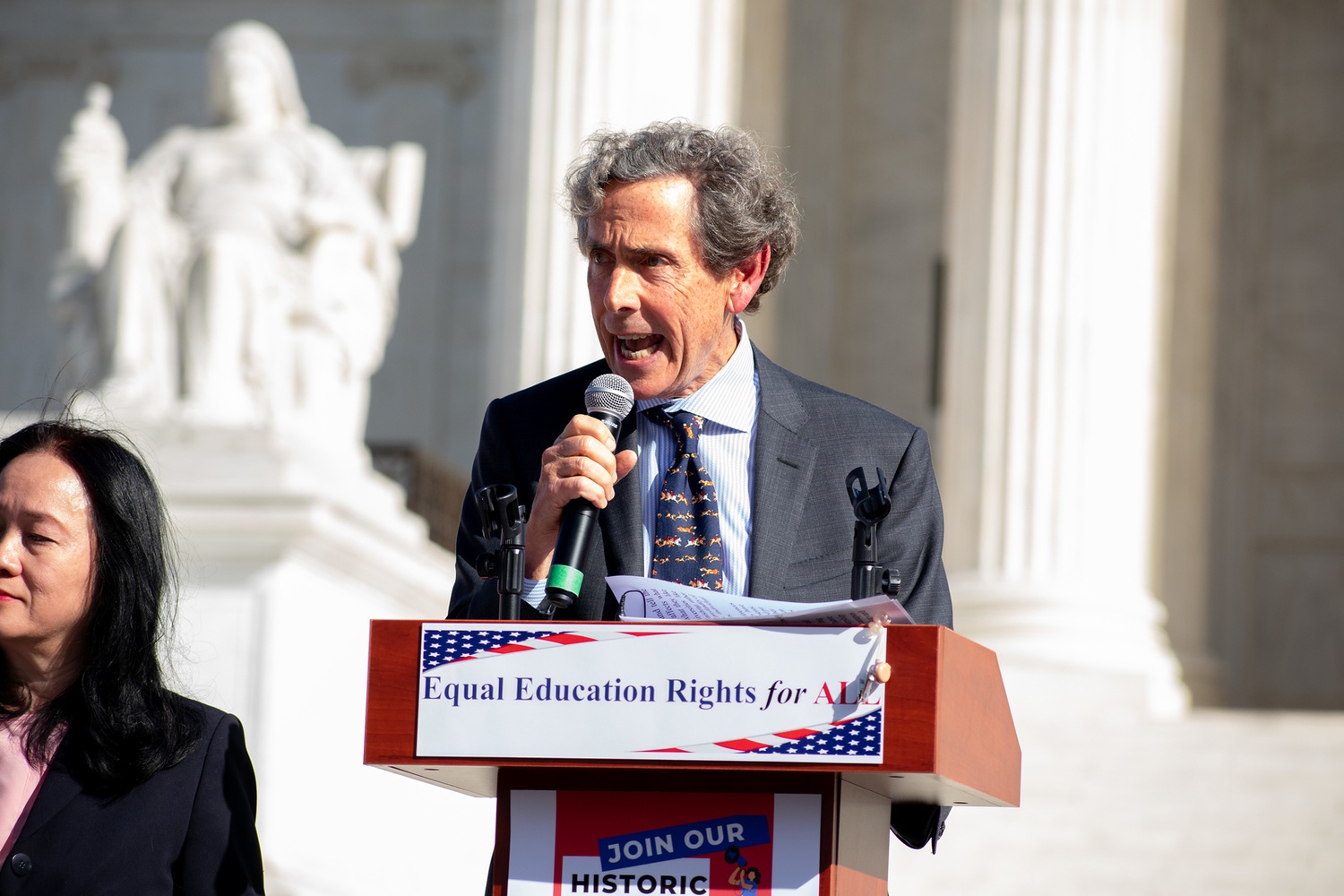 Blum, who is not a lawyer, has orchestrated an array of legal efforts seeking to ban affirmative action — including a pair of lawsuits against the University of Texas that alleged the school discriminated against a rejected white applicant, Abigail M. Fischer, because of her race. The Supreme Court narrowly upheld the university’s race-conscious admissions program in a 2016 ruling on the case, but with a newly expanded conservative majority, many experts expect a different result this time around.

“Eliminating legacy preferences, preferences for children of faculty and staff, children of wealthy donors, while giving a greater weight to students from economically disadvantaged backgrounds, will produce an individualized and diverse student body without treating students differently by race,” Blum said on Sunday.

Calvin Yang, a sophomore at UC Berkeley who also spoke at the event, said in an interview he believes Harvard should craft an admissions program that considers socioeconomic diversity instead of racial diversity.

“It's a fact that African Americans and Hispanic Americans, unfortunately, suffer from a higher incidence of poverty rate, compared to the national average,” Yang said. “But Harvard can help remedy and ensure this racial inequality by instituting systems similar to that, as opposed to purely race where you're just looking at one skin color.”

Lee C. Cheng ’93, a lawyer from California who heads the Asian American Legal Foundation, said in an interview that the rally was “about allowing students to apply to Harvard without having skin color become determinative.”

“This is the most incredible gathering I have seen in my 30 years fighting racial discrimination in the name of diversity and affirmative action, both of which are very worthy causes,” he said.

More rallies are scheduled for Monday at the Supreme Court building, where oral arguments are set to begin in the UNC case after 10 a.m.

​​—Staff writer Rahem D. Hamid can be reached at rahem.hamid@thecrimson.com.