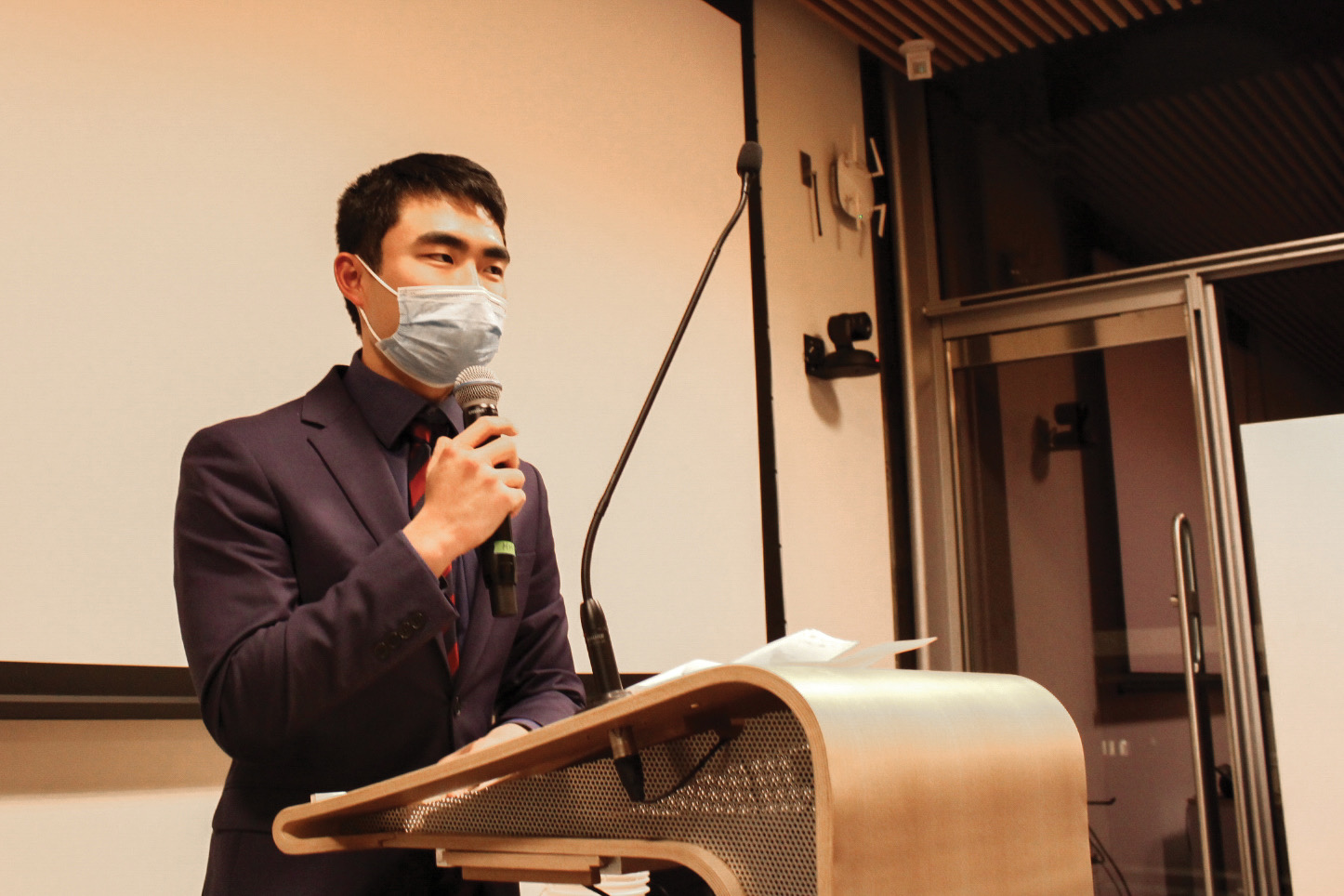 At the Undergraduate Council’s first meeting of the year Tuesday, the body’s president, Michael Y. Cheng ’22, rejected a statement of solidarity from general members written in response to racist signs posted on his door earlier this week.

The two-hour-long meeting featured impassioned debate, an expletive-laced speech, and criticism of the meeting’s structure. Tuesday’s assembly represented a departure from the Council’s traditional meeting time on Sundays — an adjustment Cheng made to bring in a mediator, Assistant Dean of Student Engagement Kate T. Colleran.

Colleran said she was optimistic about unity she observed this week after Cheng was targeted by racist posters. On Monday morning, two flyers calling Cheng an anti-Asian slur and featuring the phrase “SAVE THE UC” were posted on his door, sparking student and faculty condemnation.

“I got a lot of emails from some of you this week after the posters went up on Michael’s door, and that is maybe the most cohesion I’ve seen from the UC in months,” Colleran said. “So, more of that.”

The message of unity was quickly undercut by an address Cheng delivered to the Council afterward, in which he rejected a statement of solidarity that was drafted by members of the body.

“I’m really rising to explain why I don’t support the statement of solidarity with me,” Cheng said in a 10-minute speech. “I think we need to have some tougher conversations first before I would support that statement.”

In the drafted statement, which was addressed to “the Harvard College Community” and obtained by The Crimson, UC members condemned the racist attack against Cheng, calling it “unacceptable” and “disgusting.” The statement offered support to Cheng, saying: “We are here for you. We stand with you. We support you in whatever you need.”

But on Wednesday, Cheng called the move hypocritical.

“This kind of hypocrisy should not be tolerated, which is why I’m still very disappointed,” he said. “We’re now supposed to take seriously that the Undergraduate Council is offended by anti-Asian racism, with many of its members engaged in a multi-month harassment campaign that was influenced by anti-Asian stereotypes.”

Some UC members reacted to Cheng’s statement with incredulity, while a few cheered in support.

Cheng reiterated his belief that the racist posters were put up by a UC member.

“The person or people that are responsible for yesterday’s hateful attack, as well as the multiple kinds of other attacks targeting me, are potentially in this room right now,” he said.

The Council then moved on to consider a proposal for a student referendum to declare election day a University holiday and day of civic action. Sponsors of the bill cited similar initiatives at peer institutions, including Brown and Columbia. The bill passed, 31-2, with the referendum vote set to be held shortly after spring recess.

The Council also tabled a bill calling for the UC to send an email backing the creation of a new student government constitution — a central tenet of Cheng’s campaign to overhaul the body’s existing structure.

Discourse on the bill derailed into criticism of the meeting’s logistics, with some members lambasting Cheng’s refusal to allow participants to vote via Zoom.

“I just want to comment on the absolute lack of decorum and respect for others that changing the meeting to a weekday and having an adult facilitator was supposed to change,” said John S. Cooke ’25, a Maple Yard representative.