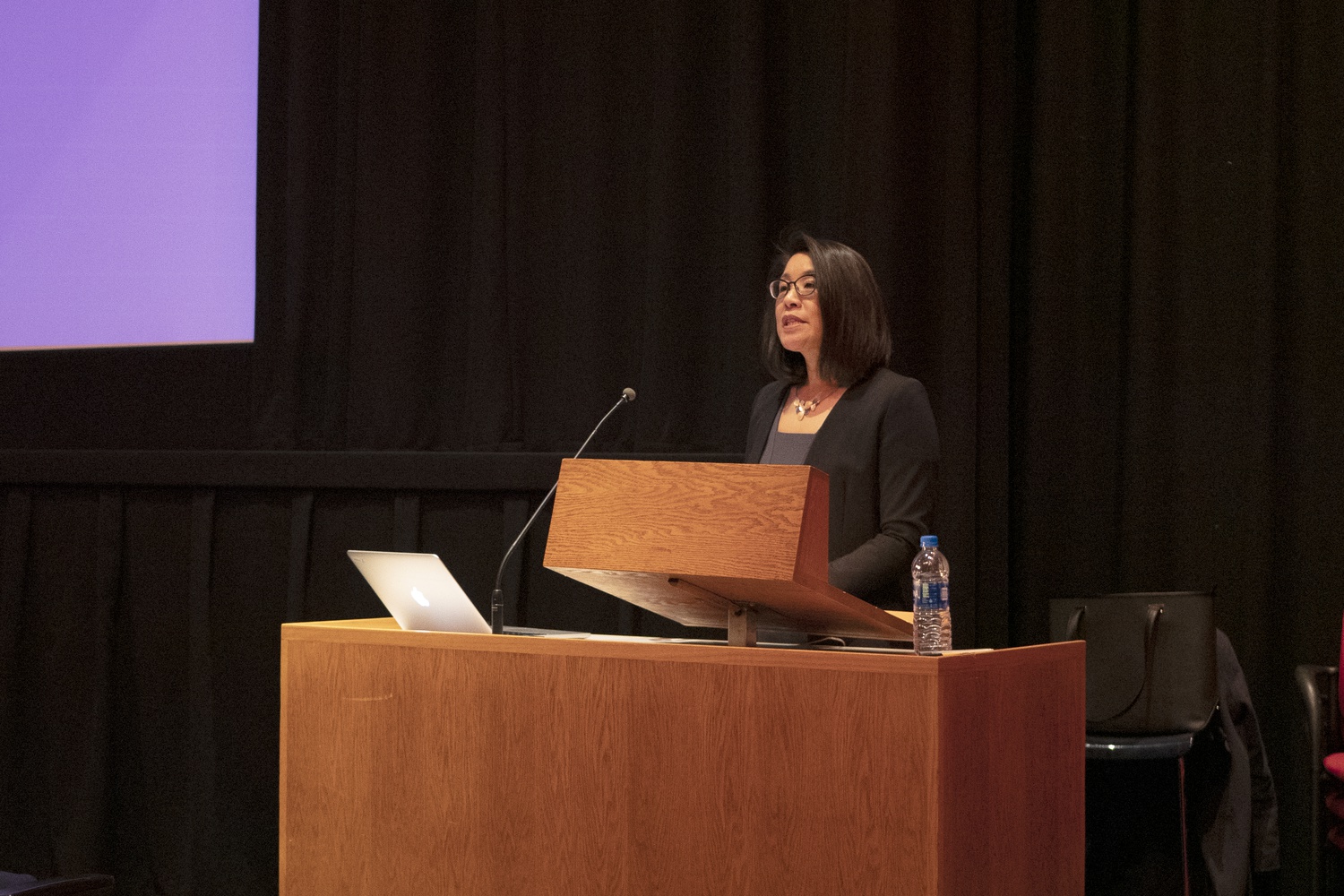 Erika Lee, pictured at a lecture in February 2020, will join Harvard's faculty in 2023. By Sara Komatsu
By Ariel H. Kim and Meimei Xu, Crimson Staff Writers

Erika Lee will join Harvard’s faculty as the second ethnic studies professor to be brought in as part of a cluster hire initiative by the Faculty of Arts and Sciences.

Lee, currently a history and Asian American studies professor at the University of Minnesota, will join Harvard as the first Bae Family Professor of History and as a professor at Radcliffe on July 1, 2023, but will be on leave until summer 2024.

“I am incredibly honored to join Harvard’s amazing History Department and to help build Asian American and Ethnic Studies at the university,” Lee wrote in a statement. “I know that this is the result of decades of work by students, alumni, and faculty and I look forward to contributing to their efforts.”

In February 2022, FAS Dean Claudine Gay announced the school was “actively recruiting” four scholars it had identified as part of the ethnic studies cluster hire. Erika Lee is the second professor to be hired as part of the initiative, following Government professor Taeku Lee, who joined the University Friday.

Erika Lee was one of numerous candidates that visited Harvard in 2020 as part of a lecture series attended by potential future ethnic studies faculty hires.

After a nearly five-decade push from Harvard affiliates for an ethnic studies program, Gay announced a search for faculty specializing in Asian American, Latinx, and Muslim studies in June 2019. The search was suspended in April 2020 due to the pandemic, only to resume four months later.

The Coalition for a Diverse Harvard, an advocacy group made up of Harvard affiliates, first announced the news on Tuesday. Jeannie Park ’83, a co-founder and board member of the coalition, wrote in a statement that she is “thrilled” about the two ethnic studies hires thus far, but said the decades-long lobby for an ethnic studies program at Harvard is “far from over.”

“More faculty are needed, including in Latinx, Muslim American and Native American Studies, and Harvard has not yet committed sufficient resources for new and existing faculty to develop the Ethnic Studies program and eventual department that the University deserves,” Park wrote. “We also believe a commitment to an Ethnic Studies Department should be a job requirement for the next President of the University.”

Dean of Social Science Lawrence D. Bobo said in a press release that Lee is “exactly the sort of eminent and impactful scholar” that Gay sought to bring in with the cluster hire.

“Erika Lee is a trailing blazing historian of the Asian American experience. There is no voice of greater authority in this domain,” he said. “Moreover, she brings a keen and critical eye to recent anti-Asian, Anti-immigrant and Xenophobic movements in the U.S. She is a truly powerful writer and voice, with wide influence across the social sciences and humanities.”

The Coalition for a Diverse Harvard said it would welcome Lee with programming before she arrives at Harvard.

In her statement, Lee wrote that she is excited to teach students at Harvard and was “impressed” by “their vision for Ethnic Studies at Harvard.”

“At a time when the teaching of race and racism is being threatened in many classrooms across the country, Harvard’s commitment to Ethnic Studies sends an important message,” she wrote. “I’m eager to be part of this ongoing movement and to continue my work researching, writing, and teaching History and Ethnic Studies alongside Harvard’s incredible faculty and students.”