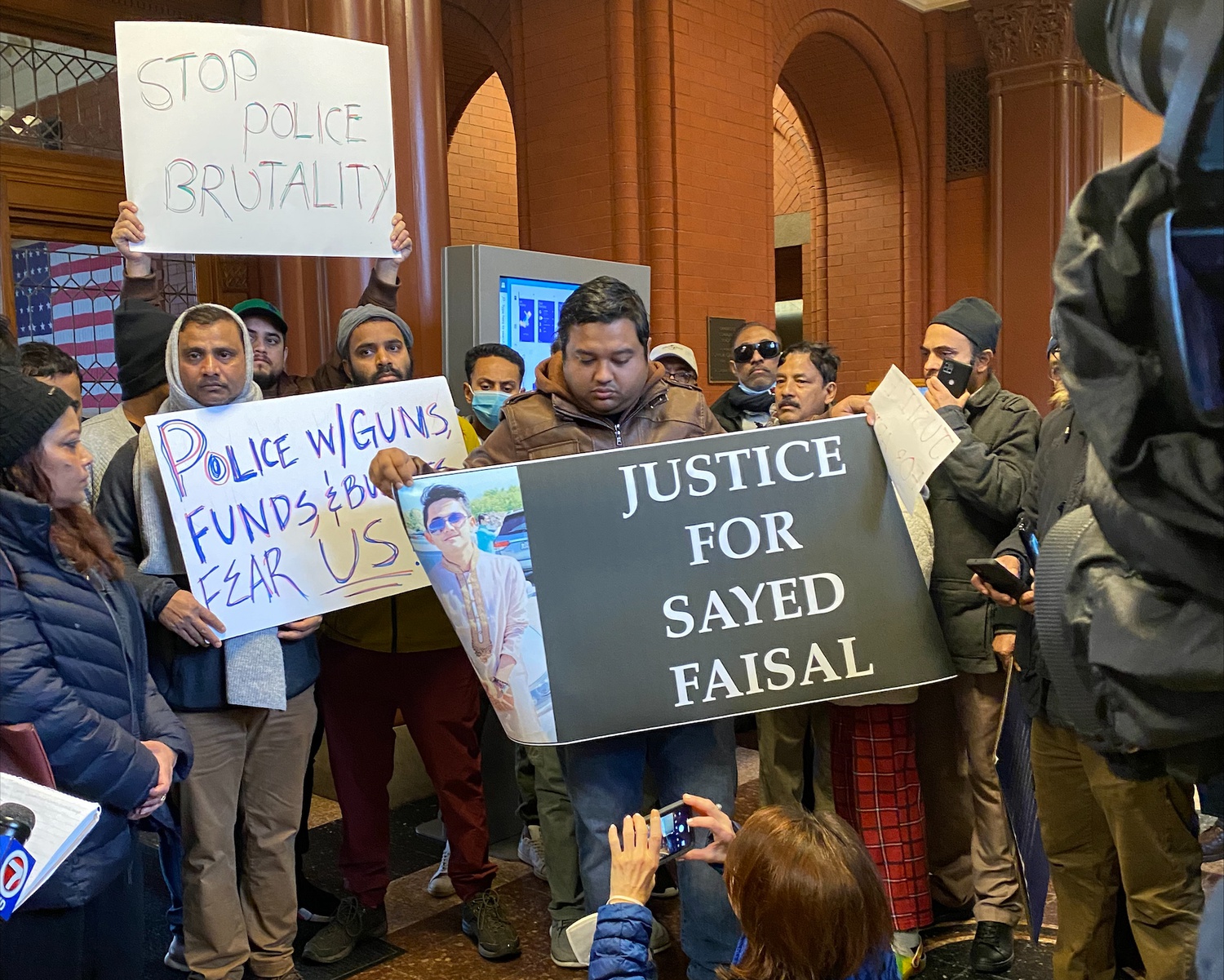 The man was identified Wednesday evening by Cambridge Police Department as 20-year-old Sayed Faisal, a Cambridge resident and University of Massachusetts Boston student. Faisal’s death is currently under investigation by the Middlesex District Attorney’s Office. After seven years with the CPD, the officer who shot Faisal was placed on administrative leave.

At 1:15 p.m. Wednesday, a 911 caller reported that Faisal had jumped out of a window and appeared to be harming himself, according to a CPD press release. After a chase through several blocks in Cambridgeport, Faisal allegedly moved toward officers while wielding a kukri knife. A CPD officer shot Faisal with a non-lethal sponge round, the release said, and when this did not stop Faisal, an officer fatally shot him.

Faisal later died from his injuries after being transported to Massachusetts General Hospital.

In a joint statement Wednesday, Cambridge Mayor Sumbul Siddiqui and City Manager Yi-An Huang ’05 said they were “deeply saddened” by the shooting, adding that the city would hold a community meeting at an unspecified date to process Faisal’s death.

“Our thoughts and condolences go out to the family and loved ones of the deceased,” Siddiqui and Huang wrote. “We are committed to learning from this case to ensure the safety and well-being of everyone in our community.”

The Bangladesh Association of New England, a cultural nonprofit for Bangladeshi Americans, condemned the killing of Faisal, which they called an act of police brutality in a Wednesday Facebook post.

“He was the only child of his family. This is not acceptable,” the group wrote. “We need to bring justice for this young brother.”

The organization has raised around $12,000 to cover costs for Faisal’s funeral and support his family, as of Friday afternoon. The group also held a rally Thursday afternoon at Cambridge City Hall to protest the killing of Faisal, calling for complete transparency from the department.

The protest was attended by more than 50 people, including friends and family members. Some held handwritten signs reading “CPD IS NO EXCEPTION,” “Justice for Sayed Faisal,” and “We Don’t Trust Your BS Investigation.” Sayed Mujibullah, Faisal’s father, stood among the demonstrators with tears in his eyes.

Mujibullah said through a translator that Faisal “was a very meritorious student” in an interview with WCVB.

“He was going to the University of Massachusetts,” Mujibullah said, adding that he had hoped his son would become a doctor or engineer.

Some protestors charged that Faisal’s killing was racially motivated, and others questioned the need for police in Cambridge to wield lethal weapons at all, citing the city’s low crime rate compared to other cities.

Warnick wrote in an email that “it would not be appropriate” to comment on individual allegations while the shooting is under active investigation, adding that the officer who shot Faisal had no complaints filed against him in his career.

“Any time a life is lost in our community, it is tragic, so we are all mourning,” she said.

At the rally, Bangladesh Association of New England President Pervin A. Chowdhury called for more accountability.

“He’s a baby – you can’t just shoot,” Chowdhury said. “This police need to be trained.”

Cambridge City Councilor Quinton Y. Zondervan offered his condolences to Faisal’s family in an emailed statement to The Crimson and called for Cambridge to look into alternatives to policing for public safety.

“We must reject the racist system of policing that is failing our young people, failing our minority communities, and failing those experiencing a personal crisis,” he wrote.

“If we don’t drastically change our approach to public safety, it is only a matter of time before this happens again,” Zondervan added.

A previous version of this article misspelled the name of Sayed Mujibullah.