Would You Rather: Office Hours with Gus and Sietse 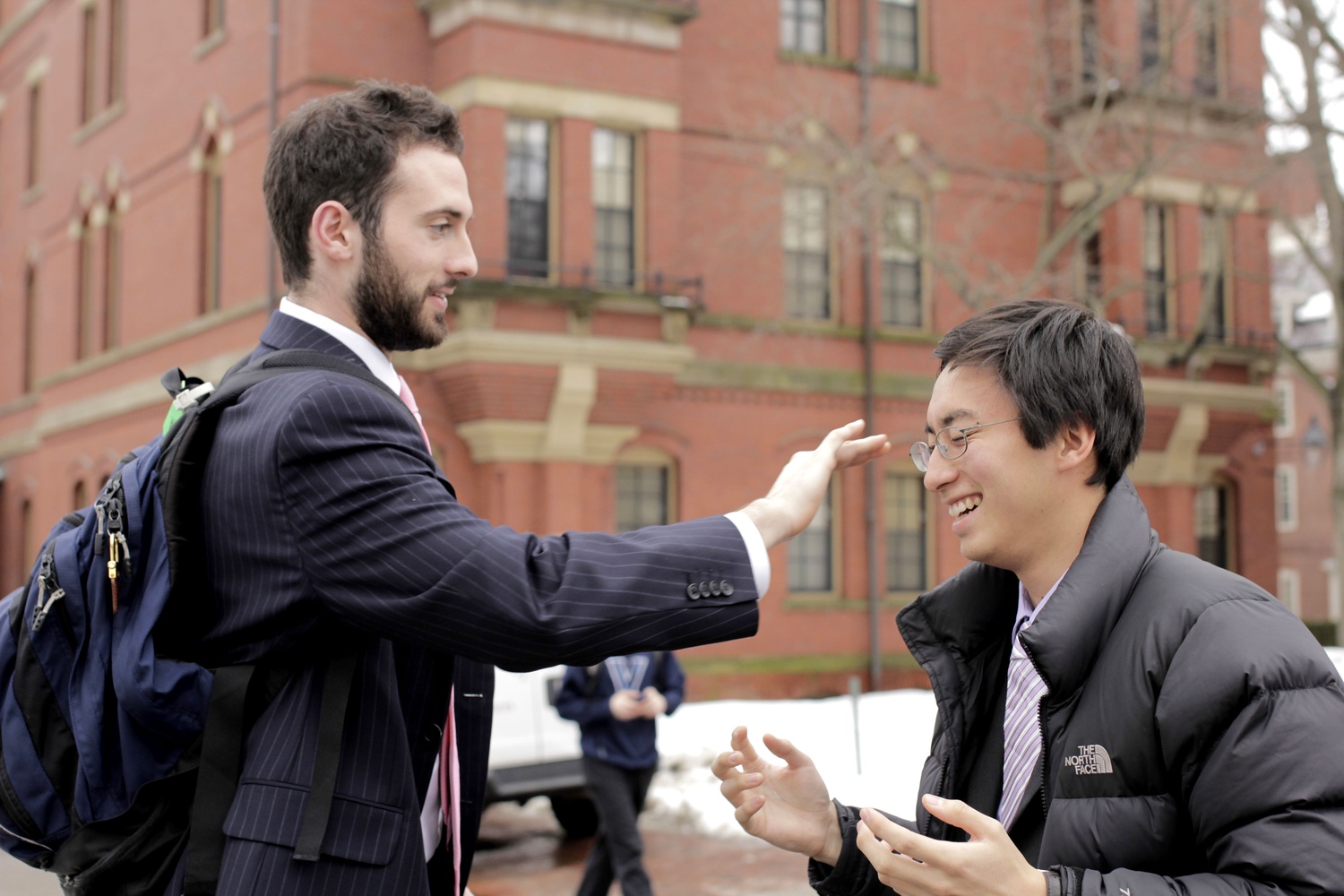 If you've been wanting to get to know our glorious UC President Gus A. Mayopoulos ‘15 and Vice President Sietse K. Goffard ‘15 more personally, you’re in luck. Flyby recently sat down with the power duo at their office hours to ask some hard-hitting personal questions.

Flyby: Would you rather never have to worry about money ever again or live in a world with Pokémon?
S: Oh, this is a tough question. [To Gus] Given that, I mean, you’re a big Pokémon fan.
G: Yeah...would I rather be Mankiw or live in a world with Pokémon?
Flyby: Would you rather be Mankiw or Ash Ketchum is basically what it boils down to.
S: I know what I’m going for. Money.
G: Pokémon.
S: 250K, Gus!
G: You could own a Pikachu!
S: Think of the children!
Flyby: Money can’t buy Pokémon.
S: Pokémon can’t buy 250K.
G: It kind of depends on your morals, but…you could get a lot of money for an Articuno. Is there only one Articuno in the world?
Flyby: There’s only one.
S: What is an Articuno?
G: Next question.
S: [Laughs]

Flyby: Would you rather be sexually attracted to fruit or have Cheetos dust permanently stuck on your fingers?
G: I don’t currently have Cheetos dust on my fingers, so I guess I’ll go with that one.
Flyby: So you would rather have the dust permanently on your fingers. Are you saying you are attracted to fruit?
G: What? I didn’t…say that…
S: But you implied it.
Flyby: Are we going off the record?
G: No… [laughs]
S: What type of fruit?
Flyby: All fruit.
S: I mean being sexually attracted to a banana is very different than being sexually attracted to like a watermelon.
G: I’d like to separate myself from that statement…and say that that represents Sietse’s personal beliefs.
S: [Laughs]
Flyby: So are you going with the fruit?
S: Yeah, I like fruit more than Cheetos.
G: Yeah.

Flyby: Would you rather be stuck in Jurassic Park with no way out or stuck in the game Jumanji having to be harassed by Robin Williams?
G: I think I stand a better chance surviving Jumanji.
Flyby: But there’s Robin Williams.
G: [pauses] Jurassic Park. Death will be fast.
S: Either way, we have a better chance of surviving in those places than surviving in Mass Hall.
G: Hey oh!
S: In President Faust’s office. But no, I would say Jumanji. I loved that movie.

Flyby: Would you rather sweat mayonnaise or poop softballs?
S: Wait, sweat mayonnaise?
G: That’s the part that disturbs you? Have I like evolutionarily…like…you know what I’m asking.
Flyby: Yeah. I mean, if you had, then it would be easy…
G: It wouldn’t be a big deal.
Flyby: I mean, eventually you’ll…you’ll adjust. But…
S: Hmmm. I think if you sweat mayonnaise you’d smell pretty bad.
G: You’d smell different.
S: But you wouldn’t…
G: Softball.
Flyby: Softball, really?
S: Well they’re not baseballs, they’re softballs.
G: Do you know how big a softball is?
Flyby: Softballs are pretty big.
G: It’s bigger than a baseball.
S: Oh it is? It’s not very popular in France. Hmmm softballs…
G: You wouldn’t have to wipe.
S: Yeah, I’ll go with the sweat thing.


Flyby: Okay, that’s all I’ve got. I appreciate you guys stepping up to the plate and really answering the tough questions.

If you have your own questions for Gus and Sietse, you can stop by their office hours on Mondays, 4-5 p.m. in Greenhouse Café and Thursdays, 5-6 p.m. at Loker Commons.