The realm of Harvard celebrities boasts computer science geniuses, iconic American family members, and most importantly, the Harvard Class of 2017 Facebook group stars. These internet personalities were able to spare us a moment of their busy lives to have a talk with us about their online fame. Class of 2017, we all remember the unforgettable posts of Gabby D. Aguirre ‘17, Gabriel L. Guimaraes ‘17, Luka Kordić ‘17, and Stephen A. Turban ‘17.

Luka Kordić '17 starts a riot. By Courtesy of Facebook

Flyby: What first motivated you to start posting in the group, and did you ever anticipate stardom?

GA: “No I didn’t actually anticipate stardom. Actually, I got in regular decision so by the time I joined the group, the famous people were already established, and I was like, ‘I gotta keep up with them,’ so I started trying to be cool and witty. I saw people who were getting like 60 likes on their comments and I was like, ‘I gotta step my game up.’ And it happened.’”

ST: “Literally, before I came, I made it a goal for myself to become active on the Facebook page. I've always been really bad on social media, and I kind of wanted to be good at it.”

GG: “Did you write it down [in your notebook]?”

ST: “Yeah, I did. It was an idea. It was like ‘I'm going to try to post something everyday, and make it good and interesting.' I wanted to be a presence. And yeah, I did anticipate stardom.”

LK: “I was bored. I mean honestly, I could say I wanted to connect with people, but no. I was just bored. I took a gap year, and it was my second gap year already and I was running out of things to do. This was my hobby. Did I anticipate stardom? Of course. I could play the false modesty card, but yeah I posted a lot and it’s not like I’m even a star in the good sense. But I’m a star, I’m famous. People stop me in the street—you know, old people, young people, mothers with their kids.”

GG: “People on Facebook were having lots of meet-ups and stuff, but since I’m from Brazil, I didn’t really get to have those things. I felt more at Harvard through the group. And there’s no such thing as stardom.”

LK: “There is, actually. Whenever I say Gabriel, I don’t have to clarify. Everyone’s just like, ‘Oh, Gabriel.’ You’re a star.”

ST: “You know what’s funny, though? I knew Gabriel for a while before I connected him to his Facebook photo.”

ST: “You’re also like the most photogenic person I know.”

Flyby: How was it introducing yourself when you actually moved onto campus? Did people recognize you?

GA: “At least 15 to 20 people that I met on the first week were like, ‘Oh, I know you from Facebook!’ or people would be like, ‘Oh, I already know you!’ so it was a little bit awkward. When I first meet someone, I should just be able to say like, ‘Hey, I’m Gabby!’ but it got disrupted because people already knew me.”

ST: “I definitely expected there to be a funny dynamic when I got on campus. I didn’t realize how many people were not active on Facebook, but read all the posts—lurkers.”

GG: “People wanted to take pictures with me in the first few weeks of school. They said, ‘Oh my God, you’re Gabriel, ah!’

LK: “I’m kind of sad no one wanted to take pictures with me.”

Flyby: How has posting in the group been since you’ve actually started school?

GA: “Since I started going here, I don’t actually post as much because I feel like a lot of people just post about events or extracurriculars on campus, but I’m not really involved in any of those things so I don’t really post as much. I try to still ask people about their winter breaks or spring breaks just to see what people did, but people just don’t reply.”

ST: “I think the dynamic of the group was that it was much more democratic at first, and then as the summer went through, it kind of funnelled into a couple of people, and then now, we’re nothing.”

Flyby: Do all of you guys know each other, and is there a Facebook celebrity friend group?

LK: “We all know each other, but there isn’t like an exclusive and elitist group. We’re not like that.”

GA: “I know Luka and Gabriel. I met Stephen like once because he needed my ID for some reason, so I let him borrow it. I don’t know, it was really creepy. I feel like a lot of the Facebook celebs are friends. I think there are groups, and then other ones that are like me that are kind of normal now, like they’re reintegrated into normal people life.’”

ST: “I made a couple of really good friends through the Facebook page.”

GG: “This was a really big thing for me. I felt like I had friends way before school started. And then me and Luka for example, it was funny, when we met, there was no introduction needed. He was standing in front of Weld, and we just screamed, ‘Oh!’”

Gabby D. Aguirre ‘17 has a moment at Olive Garden By Courtesy of Facebook

Flyby: What do you think about being deemed a “Facebook celeb”?

GA: “I think it just shows the extent to which I have no life, because if I’m cool enough to be a Facebook celebrity, it means I’m not doing anything in my actual time, I guess. It’s not like I’m going to wherever and doing something like Habitat for Humanity, I’m just on Facebook.”

Flyby: If you could do it over again, would you want to be a “Facebook celeb”?

Flyby: How would you describe your Facebook persona, both on your personal profile and in the Class of 2017 group?

GA: “I guess when I post in the group, I try to get to know everyone and keep up and be witty. I think on my actual Facebook, I either post music a lot or like try to be funny. Sometimes it works out and sometimes it doesn’t.”

GG: “Luka’s kind of bad-ass on the Facebook group.” 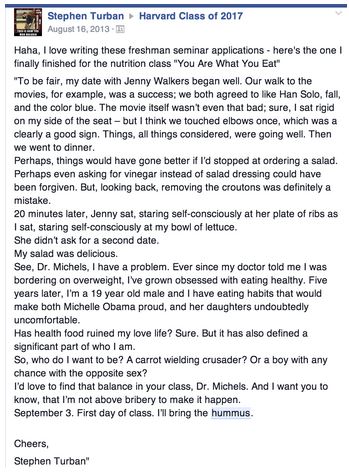 Stephen A. Turban ‘17 writes his Freshman Seminar applications By Courtesy of Facebook

Flyby: Do you have any advice for the Class of 2018 Facebook celebrities?

ST: “Connect with us, we will bump up your posts. And also, telling them it’s all about the long-term commitment—it’s about the marathon, not the race.”

LK: “It’s all about supply and demand, as long as there’s a demand for it. Thank you, Professor Mankiw.”

GA: “Get ready for everyone to say, ‘Oh, I know you from Facebook.’ Like don’t be like shell-shocked. Also, try to make sure that if you’re funny on Facebook, you’re funny in real life.

Flyby: Do you have anything else you'd like to say?

ST: “Thank you to my mother for training me to become a Facebook celebrity.”

GG: “I would like to send my thanks to my family as well.”

LK: “I think we should all take a moment of silence for Promit Ghosh.”

ST: “Yeah, we would all like to send our love to Promit Ghosh, and we’re sad that he could not be here today.”