Harvard is no stranger to celebrities. They only come by, like, once a week. And when you’ve seen the Vice President, the creator of HONY, the former Miss America, the United Nations Secretary-General, Amy Poehler, and Chris Pratt in the span of just a few months, you’ve basically seen them all. But little do you know, there are celebrities walking among us this very minute. It’s high time they get the recognition they deserve. Presenting… the Class of 2018 Facebook celebrities: Gabriela (Gabi) “Wabi” Thorne ‘18, Tania Fabo ‘18, Maria Zlatkova ‘18, Wyatt Robertson ‘18, and David (Davey) Hughes ‘18.

Flyby: What first motivated you to start posting in the group, and did you ever anticipate stardom?
TF: To be honest, I was just bored. Especially in high school, as a second semester senior. I thought, what do you do with your life? Oh, I thought, why don’t I post in the college Facebook group? Also I was so excited to have gotten into Harvard, and I wanted to make sure Harvard people knew who I was.
MZ: Yeah, I even posted in the Princeton group for a while.
TF: I posted during lunch breaks, because I had nothing better to do with my life.
WR: I only posted once before school started. I checked my email and I saw the rooming assignment, and I wanted to be the first to post that in the group and tell everyone to check their emails.
GT: I think for me, it was honestly that when I saw something funny, I’d comment and make it even funnier.
DH: I just tried to be helpful. 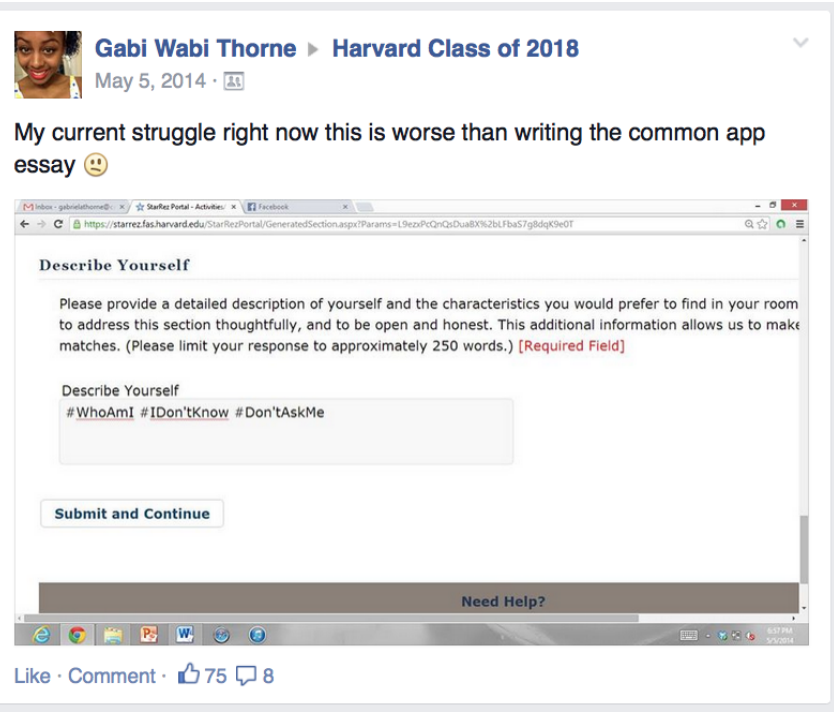 TF: I remember I wrote that one post, asking everyone what’s one book they’d rather read. I hate myself.
GT: Tania, this is being recorded.
TF: I was on the floor crying because I was so ashamed of myself.
GT: I posted in the group about finding tall men.
MZ: I related to that.
TF (speaking as a tall person): Did you really? To what extent?

Flyby: Wait guys we’re going off-topic.
WR: It actually got easier for me to post in the Facebook group once we got here. I’m part of the UC and FYSC, so I have to post pretty regularly in the group anyway.
TF: It got weirder for me to post once I got here. I wanted to be in the real world, meeting real Harvard people. It felt weird making funny comments on the group. Except when I needed help with math– that’s when I started posting in the school year.
MZ: I forgot to be Facebook active in the first few weeks here. It was so overwhelming.
GT: I just met people in real life.

Flyby: How was it introducing yourself when you actually moved onto campus? Did people recognize you?

TF: Introducing myself, or having other people introduce me? I realize that I sound like an @$$hole.
MZ: With me, it’s the hair. People would just know me as the “girl with the red hair.”
GT: I just say, “Hey, I’m Gabi” and they say, “Gabi Wabi!” and the conversation ends there.
DH: Yeah, a lot of people recognized me.
WR: Basically everyone.
DH: It was also the hair.
TF: Oh, the big hair!
WR: Please when you write “@$$hole” in your article, use dollar signs and an at symbol. (you're welcome)
GT: Can I call people @$$hole or is that rude?
WR: Well generally that is rude.
MZ: In Bulgaria, it’s polite.

Flyby: What do you think about being deemed a “Facebook celeb”?

TF: It makes me feel lame.
WR: Whoa.
GT: Umm okay.
TF: Let me explain myself though. I feel like a lot of times when you’re a “Facebook celeb,” people ask things like, “So do they have social lives outside of Facebook, or is Facebook the only thing they did with their lives before Harvard?” I just posted way too much. I got too eager.
GT: To be fair, so many people posted in the group besides the Facebook celebs.
TF: If I could do it again, I probably would. Even though I feel dorky about it, it was still a good experience getting to know people through Facebook before coming here. It eased the transition. So even though I feel dorky, I’d do it again.
GT: To be honest, I don’t care. I can’t feel ashamed for posting in the group when everyone else was doing it too– even people who think they’re above that. Also for me, my Facebook personality is similar to my persona in real life. I don’t feel ashamed because I’m the same way in person. I can’t feel ashamed of my personality. I mean, I can, but I don’t.
MZ: I have no shame at all. I couldn’t go to Visitas because Bulgaria.
GT: #bulgaria
MZ: Maybe I was compensating? I don’t care if people thought I was annoying. I feel like I am very social in real life.
GT: I agree.
WR: My Facebook led people to my Instagram which I unfortunately care about more than my Facebook. Follow me: @wyattandthewhale.
GT: Speaking of Instagrams, follow me: @everyrosehasitsthorne and @brassyclassysassy. 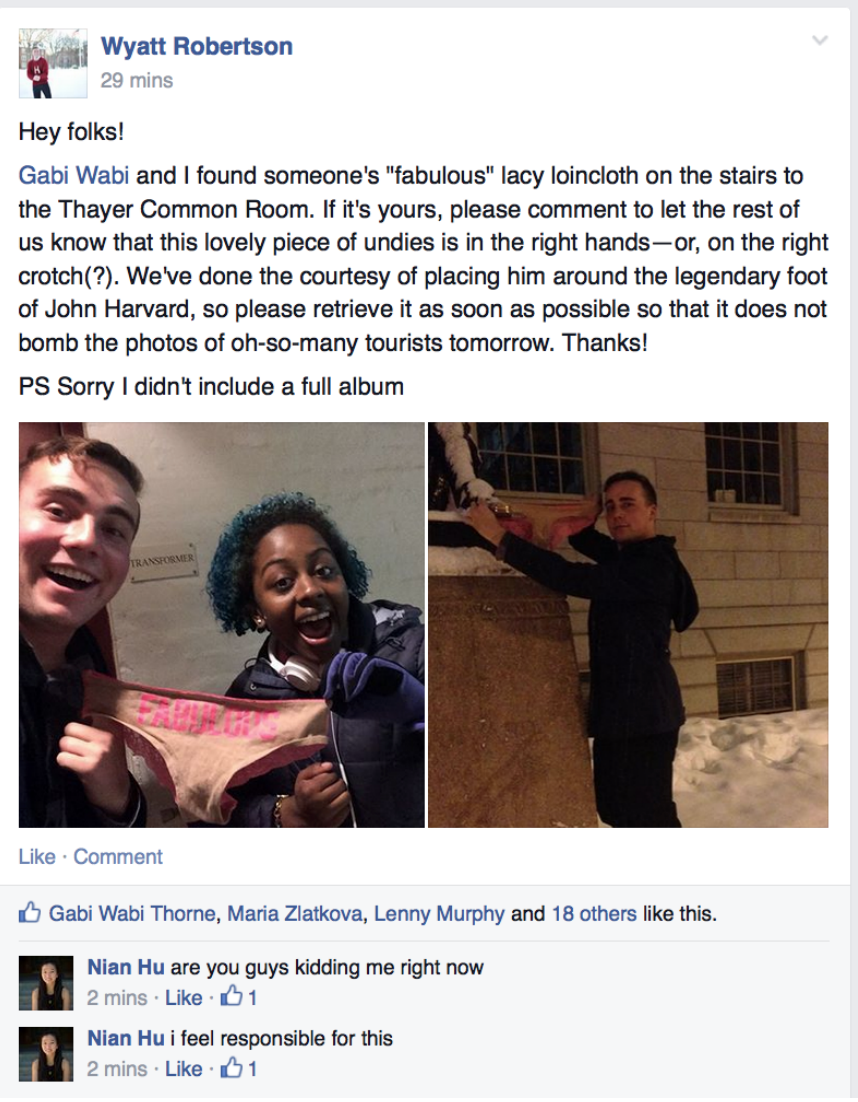 FB celebs pair up to reunite someone and their underwear, hooray! By Courtesy of Facebook

Flyby: Do you have any advice for the Class of 2019 Facebook celebrities?

TF: Roll with it.
DH: I think they’ll figure it out themselves.
GT: Do what you gotta do. You’re going to make friends here no matter what.
WR: Post photos of the most expensive gifts your parents get you. That’ll get you instant popularity.
GT: If you’re going to post on Facebook, don’t be someone you’re not. If you feel like the person you are doesn’t like to be on Facebook, then don’t go on Facebook. There’s a lovely thing called Visitas and a lovely thing called school where you’ll meet people. Do you. Don’t do not you.