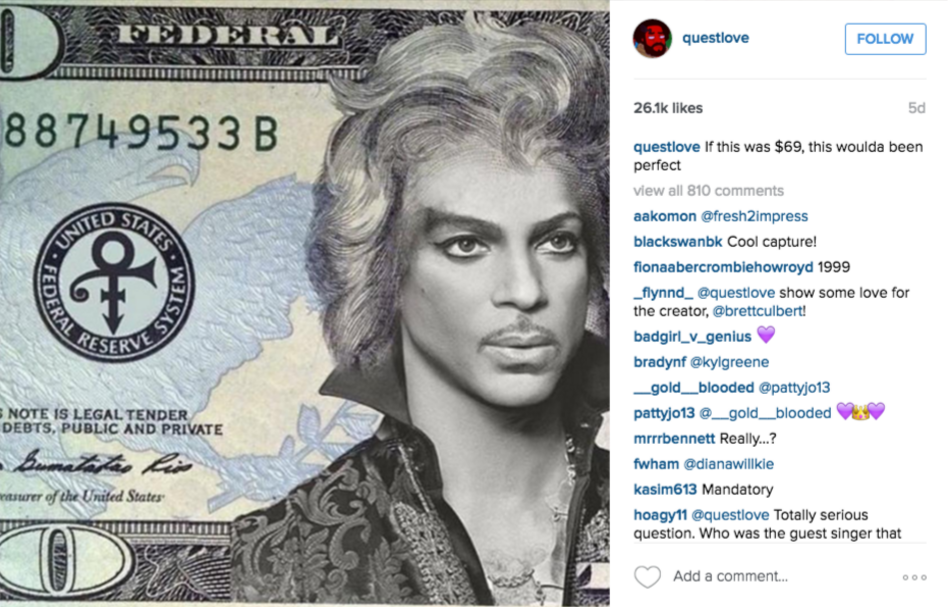 Last week, an image of Prince photoshopped onto a $20 bill went viral. But the image’s creator, Graduate School of Design Ph.D. student Brett Culbert, never got his fifteen minutes of fame.

After Culbert and his friend decided to post the image on Reddit with the title “party like it’s $19.99”—mixing one of Prince’s most popular songs, “1999,” with the news that Harriet Tubman would replace Andrew Jackson on the $20 dollar bill—the photoshopped image spread like wildfire.

On Twitter, one user’s post including the image amassed over 5,000 retweets. Everyone from random users to journalists reposted the image.

Then came the celebrities. Questlove, a performer in The Roots, and comedians Margaret Cho and Amy Sedaris posted the image to their Instagrams without attributing the work to Culbert.

Culbert tried to reach out to some of the celebs so he could alert them to the fact that he was the creator, but he didn’t know how to contact them. His only option was to comment on their feeds, an effort that was quickly drowned out by loads of other comments.

Culbert, a History of Art and Architecture student, said he is against putting watermarks on his creations. He doesn’t see the image as a work of art or as something that is “necessarily original,” given that he photoshopped the bill from two other publicly available images.

“I really like the internet because it’s this free space,” Culbert said.

Culbert came up with the idea and created the image this past Friday. “He had such amazing hair, and Andrew Jackson had amazing hair, and I just kind of merged those two things,” Culbert said. “I was just messing around.”

He then woke up the following morning to the news that his image was all over the place. Culbert is still amazed by how quickly it spread, and by how viral memes can transcend generations.