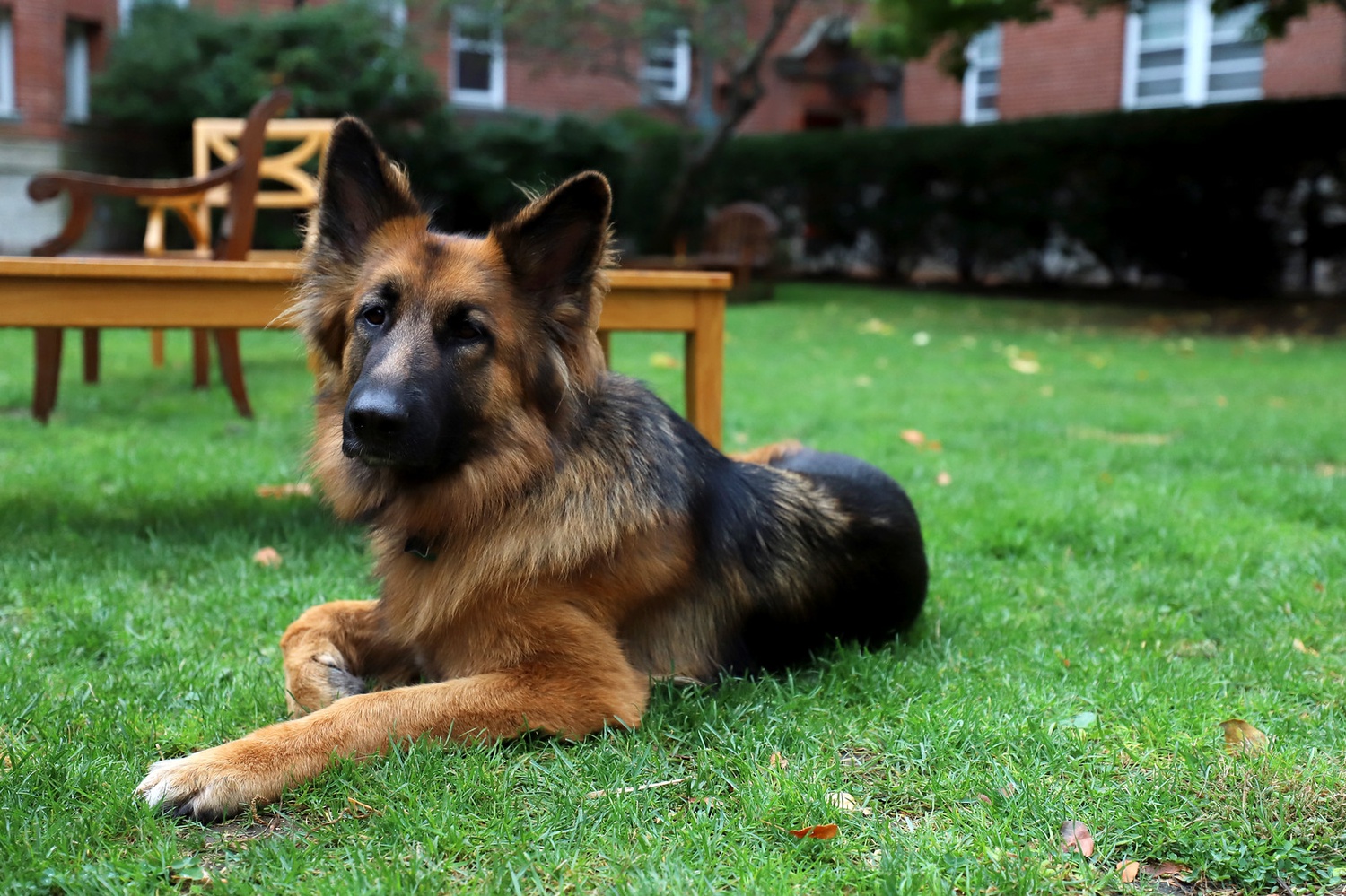 How majestic! By Kathryn S. Kuhar

Tucked away off of Plympton St. lies Randolph Courtyard, a favorite spot among Adams residents and all members of the Harvard community both for its prime Carpe-hosting capabilities and sweet scenery. If you hang around the courtyard long enough, you might just be lucky enough to see the normally peaceful space disrupted by a certain boisterous German Shepard named Beam. Flyby sat down with Beam’s human, Adams House resident tutor William Burke, to get the details on the dog that brings the courtyard to life.

Beam hails from Scranton, Pa., where she lived with her nine other brothers and sisters before joining Burke in Cambridge. When Burke first encountered Beam, he found what one might expect from a litter of puppies meeting a stranger: lots of playing, tumbling, barking, and general excitedness from the bunch — except for Beam, who was snoozing happily in a corner. Also unlike her siblings, Beam was the only pup with long hair, despite both her parents being shorthaired dogs.

“I guess there’s always a non-zero chance,” Burke says of Beam’s unique hair, laughing. “She was, like, the weirdo of the litter.”

Still, Burke thought that this sweet little “weirdo” would be a perfect fit for life on campus, and took her home.

From there, they faced perhaps the biggest dilemma of any pet owner: what to name their new companion. Of course, there were some basic criteria to guide their choice. Burke wanted to choose a name related to architecture. It also had to be a single syllable “so that it would be easy to shout,” Burke notes. In the end, Beam won out over their other top choices, “Roof” and “Eave.” However, don’t be fooled. The German Shepard’s full registered name isn’t just beam, but rather “Simply Supported Honeymoon Beam.”. 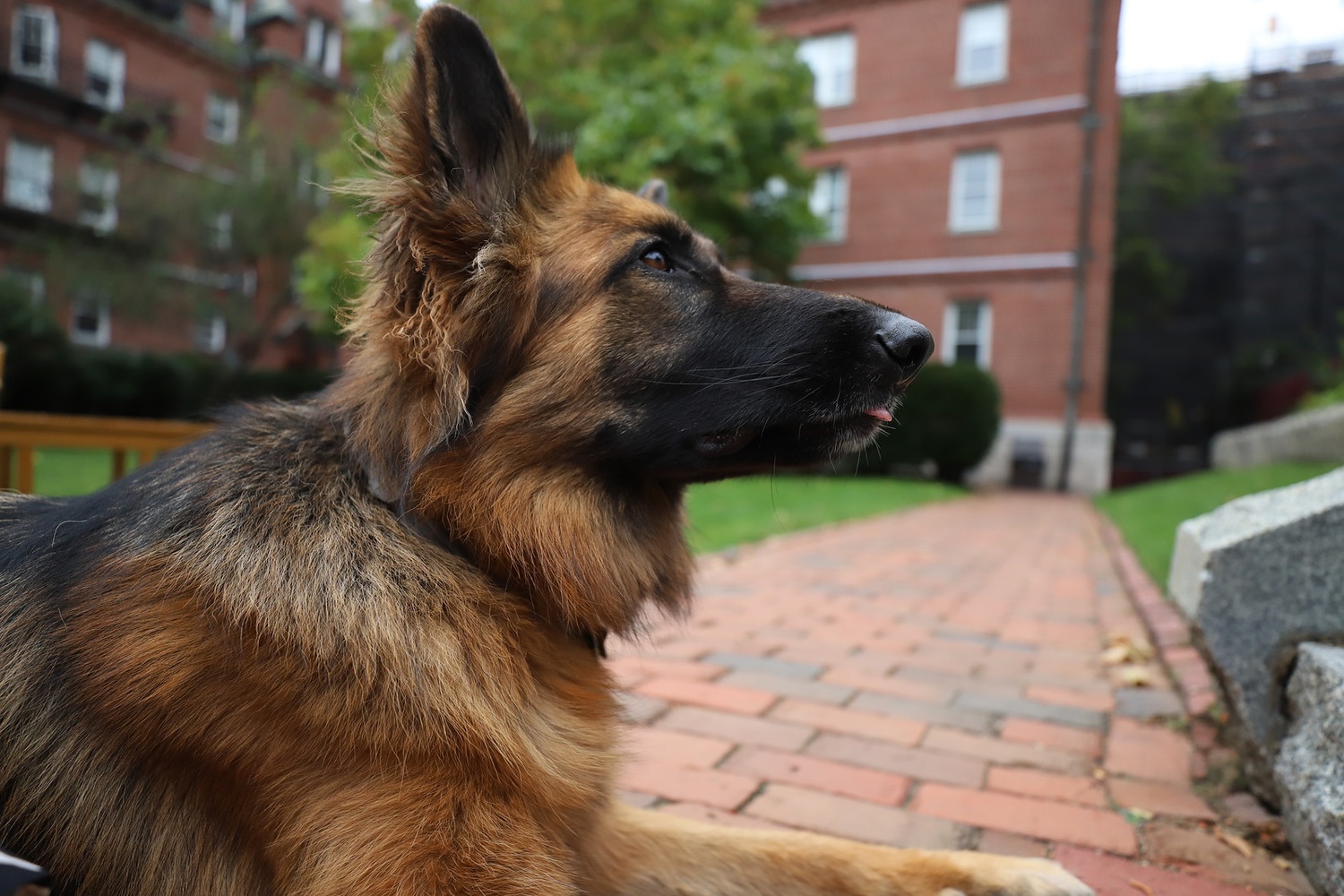 Surely a better mascot than the acorn By Kathryn S. Kuhar

In her two years at Harvard, Beam has become a staple of the Adams House community. “Every hour is puppy office hours!” Burke laughs, looking over at Beam, who is deep in a game of chase with her pal and fellow Randolph canine, Opie. Beam is also a big fan of outdoor yoga, which is one of the programs Burke runs for students as a Wellness Tutor. Beam’s presence, however, may not exactly be conducive to tapping into a zen state, as she loves to lick students’ faces as they stretch. Energetic yoga interruptions aside, Burke maintains that Beam is an extremely good-natured dog.

“She grew up around 470 college students since she got here, she’s never known anything else. You could set off fireworks, or thunder, nothing fazes her. She just lies on the couch. She might, like, lift an eyebrow,” Burke said.

Beam certainly is not a small dog, but she genuinely enjoys living in a dorm. Burke chalks it up to the fact that dogs “like having a den,” and says that she actually got into the routine of living at Adams so quickly that they stopped crate training her a few months early. Despite her love of her cozy home with the Burkes, there’s rarely a day when you can’t spot Beam outside, rain or shine. So, keep your eyes peeled if you’re anywhere near Adams, and maybe even consider rerouting your walk to cut through the Randolph courtyard — you might just see Adams House’s very own German Shepherd!