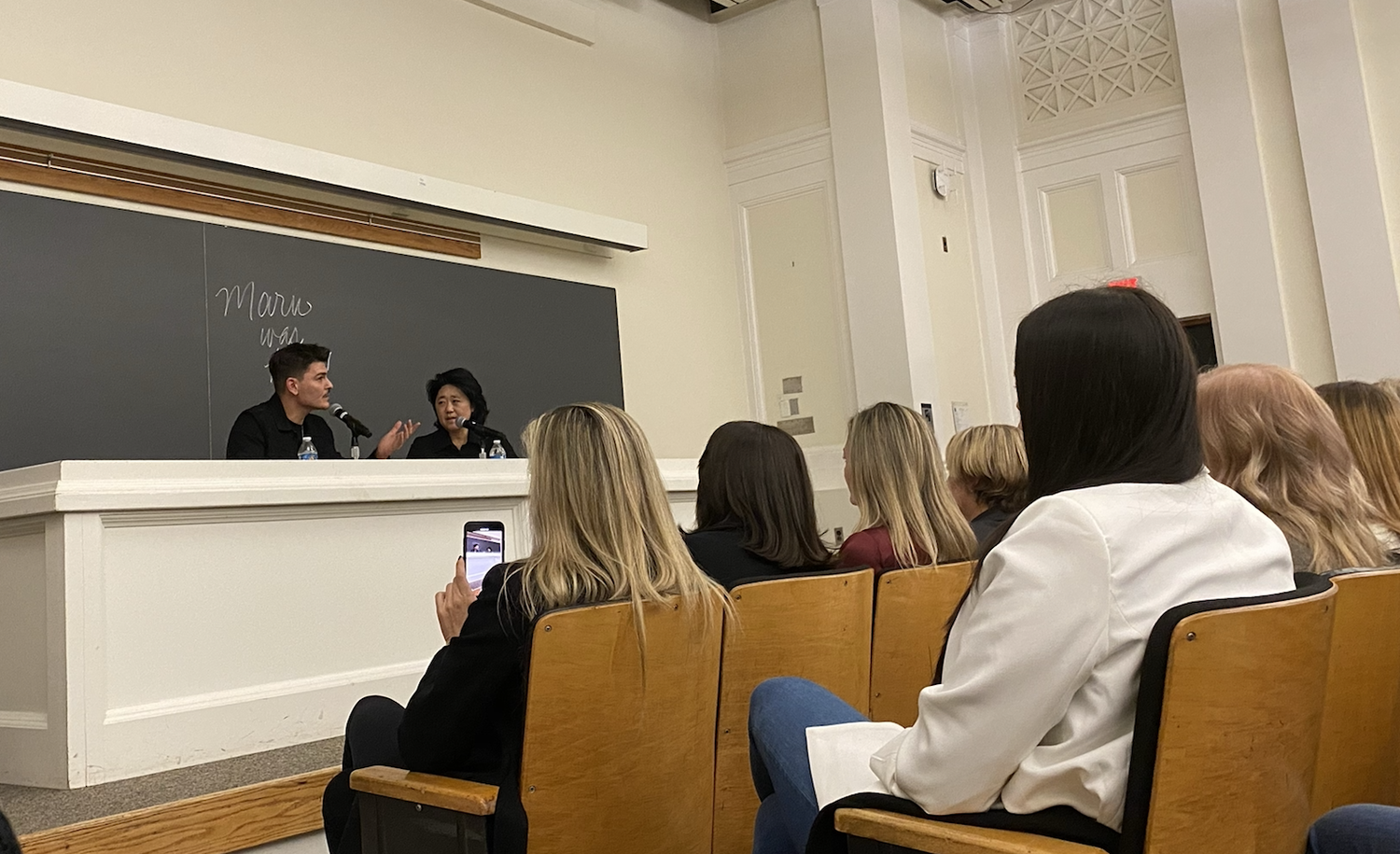 On February 13, Mario Dedivanovic delivered a talk hosted by the Harvard College Albanian Student Association as part of their Leadership Initiative Series. The event took place in Emerson Hall and was moderated by Harvard Business School Professor Youngme Moon. His talk revolved around his upbringing, professional development, and aspirations, as well as the inevitable challenges faced in the beauty industry. Dedivanovic, makeup artist for high-profile and loyal clients such as Kim Kardashian West, Kylie Jenner, Jennifer Lopez, Ariana Grande and more, has sold out his limited-edition collaborations with Anastasia Beverly Hills and KKW Beauty by Kim Kardashian West. Ten years ago he launched the Masterclass, a makeup technique class that has been taught around the world. Here are some words of wisdom I took away from Dedivanovic’s talk.

Do what you’re actually passionate about

For most Harvard students, it seems like there are only three different paths in life worth pursuing: careers in STEM, investment banking, or consulting. So when people like Dedivanovic, a globally renowned makeup artist and entrepreneur within the beauty industry, come to campus, life is really put into perspective and the Harvard bubble temporarily pops. There are so many more opportunities out there and so many more areas to cultivate our talents within — sometimes we need someone successful like Dedivanovic from the outside to remind us of just that.

It’s not like Dedivanovic’s rise to fame happened with the snap of his fingers. That’s just not how it works in the real world, even for us students pursuing a Harvard degree. Mark Zuckerberg had to start at the bottom!

Dedivanovic began his career packing bags at a grocery store when he was just 12 years old (so that he could buy a pair of Nike Jordans he really wanted). Then, when he was 17, Dedivanovic started working as a greeter at Sephora — the first Sephora that opened in the United States. He claimed that when he first walked into that Sephora, he “got a physical feeling, and that [he] knew [he] had to work there,” but his mother objected. Nonetheless, Dedivanovic applied for the job back in 2000, a job that paid only $7 per hour.

One day, however, a woman was looking for lipstick and asked him to help her choose a color. While he was not a makeup artist there at the time, “something in [him] just went to do it,” and the woman loved the color he selected for her. At that moment, he had what he calls an “epiphany,” that he knew he had “found [his] calling,” his destiny. He finally found something he could “work hard towards, to excel at” and to make his mom proud. But he knew he had years and years of work ahead of him, and so the next day he “went into the library and began the research process of what makeup artistry is, what fashion is, who are the prominent photographers and makeup artists” to understand the ins and outs of a career as a makeup artist. 19 years later, the Makeup by Mario x Sephora Brush Collaboration was featured “in every single Sephora store in the world.”

Dedivanovic explained that every major milestone for him resulted from going against the current, rather than listening to his agents and even his own peers. His agent in the early years of his career had been grooming Dedivanovic to be an “elitist makeup artist,” adamantly advising Dedivanovic against working with Kim K, a reality star who “was not globally famous the way she is now,” but Dedivanovic “knew there was something incredibly special about her.” Lo and behold, today almost every household in America knows the Kardashian name, and Dedivanovic’s collaboration with KKW Beauty sold out. How’s that for a success story?

As hard as the journey might seem, Dedivanovic, a “big believer in college education,” always tells young people to “go to school and get your degree.” So, naturally, now we have to get our degree.

Be true to yourself

At the 2019 American Influencer Awards, Dedivanovic “took the stage and publicly came out” while accepting the Artistic Achievement Award. He had gotten to the point where he couldn’t “block and suppress” anymore — this was the final step in his “yearning to seek true happiness.” The next day, when he was no longer hiding from the public and even his own family, he “felt for the first time what a glimpse of true happiness was.” We’re not crying, you are.

So this is when I worked up the courage to stand up in a room of at least 200 people and ask Dedivanovic a question: “What have been some of your most favorite makeup trends recently?” He responded by saying that he thinks trends are fun but he doesn’t really take them too seriously, and he does what “is the most flattering” for his client rather than for just “a moment.” Finally, Dedivanovic rounded up his answer with “I’m a trend-setter, not a trend-follower.” We love that energy.