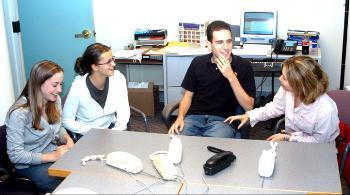 Baby, I Got Your Number

Just think of it. Exactly 100 years ago, back when F.D.R. was just a 21-year-old Harvard senior and the Red
By Nathan Burstein

Just think of it. Exactly 100 years ago, back when F.D.R. was just a 21-year-old Harvard senior and the Red Sox were still capable of winning the World Series, various branches of my family were trading horses in southern Germany and repairing shoes in eastern Poland. And now I, a nice Jewish boy born in Tennessee and raised near Seattle, with not a single connection to the East Coast aristocracy, am here at Harvard, cohabiting and making friends with kids of virtually every imaginable nationality, religion, sexual orientation and political ideology.

Somewhere in Massachusetts, John Harvard is spinning fast in his grave.

But for me, the true extent to which Harvard has changed since its founding is embodied by my term-time job as a director of the Radcliffe Annual Fund’s Student Phonathon, where I organize hiring efforts and schedule and run a couple of shifts each week.

How, you might ask, did a person of such humble origins rise to a position of such awe-inspiring power and prestige?

Mostly, it turns out, due to lucky timing. Although I’ve always considered myself pretty progressive when it comes to gender issues, I didn’t arrive at Harvard as an active feminist or a hardened gender ideologue. In fact, I didn’t really know what Radcliffe was, just that it “used to be the women’s college here at Harvard.” But when I ran out of money at the end of my first September on campus, it became clear that I’d have to get a job of some sort. When I found out how much less non-Harvard jobs in the Square pay than jobs within the university, I got in touch with the first organization I saw advertising job openings: the Radcliffe Phonathon.

I spent the next two years calling potential Radcliffe contributors—mostly female alumnae, with some male “friends” of the Institute mixed in for good measure. Though I was not the first guy to make fundraising calls on behalf of Radcliffe, I was part of a clear minority, and since the start of my junior year I have been the first man to serve as a director of the Phonathon (working this year, like last, with three smart, conscientious and generally delightful upperclasswomen). The ranks of male callers have filled out a bit—they now comprise exactly a third of the current staff—and there’s no reason to think that there won’t be more male directors in the future.

In my more self-aggrandizing moments, I like to think of myself as a crusader for equal rights, a passionate and strong-willed man who faced down adversity and broke the glass ceiling at that historically single-sex institution, Radcliffe. But the truth is that I’ve faced few real obstacles, nor have I done much more than be a consistent and fairly effective fundraiser. People tend to be a little curious about my job—“Do you only call women?”—but it’s to the credit of the Phonathon and Radcliffe as a whole that I’ve always felt perfectly comfortable at work, despite my gender and Radcliffe’s own history.

Radcliffe, for the all-too-many who don’t know, was founded in 1879 as the “Harvard Annex,” where upper-crust young women could gain access to a Harvard education; in 1894, the Harvard Annex was renamed Radcliffe College after Ann Radcliffe, an English aristocrat who in 1643 was the first woman to make a bequest to Harvard. Professors would teach men in Harvard Yard in the morning, then walk down to Radcliffe Yard for afternoon classes with the women. Women were housed separately and, for fear of what might take place in the stacks, women were barred from Lamont Library until 1967. Whatever friction existed in the literal sense between Harvard men and Radcliffe women before that time, the two institutions were constantly rubbing up against each other as they sorted out just what, exactly, their relationship should be.

The two schools took a major step toward merging during World War II, when military service depleted Harvard and Yale of many of its students and Radcliffe undergrads were allowed to take their places. By the end of the 70s, housing had also gone co-ed, and women were graduating with a Harvard seal complementing the Radcliffe insignia on their diplomas. All of which meant more equality for Radcliffe women but less clarity of purpose for Radcliffe itself, which no longer housed or educated the women it admitted and awarded degrees.

A conclusive but controversial resolution of Radcliffe’s ambiguous status was reached in April 1999, when Harvard University and Radcliffe College announced plans to merge. Radcliffe College became the Radcliffe Institute for Advanced Study, which in some ways resembles a vibrant academic think tank and remains committed to the study of “women, gender and society.” Most of Radcliffe College’s programs have continued as part of the Radcliffe Institute, and the merger actually empowered Radcliffe by giving its dean a seat on the University Board of Deans (alongside the Deans of the Faculty of Arts and Sciences, the Medical School and other university “tubs”).

The Phonathon plays a small but important role within the new Radcliffe, not only because of the nearly half-million dollars it pumps into the Institute’s general fund each year, but also as one of the only ways in which Radcliffe stays connected to undergrads (research partnerships and mentorships with Radcliffe fellows being two of the others). Situated between Harvard Yard, the river houses, and the (formerly Radcliffe) Quad, the Phonathon office—located in Radcliffe Yard—attracts approximately equal numbers of callers from each part of campus. Away from noisy dorm rooms, crowded dining halls and asphyxiating libraries, the Phonathon office can even take on certain characteristics of a refuge, and one that pays a starting wage of $10 an hour to boot.

Because we have a relatively small staff (30 callers plus four directors), and because of the Phonathon’s relatively informal atmosphere (each shift takes a 15-minute break for Phonathon-subsidized snacks), callers get to know each other pretty well.

While there is a fair amount of turnover from semester to semester, the core group of callers remains constant enough that an undeniable Phonathon subculture develops each year. We have our own semi-retired slogan (“Don’t call us. We’ll call you!”); we have our own incomprehensible in-jokes (two years ago it was considered uproariously funny when someone suggested making t-shirts that read, “We put the fun in Radfuncliffe”); we even have our own dialect (among other additions to the English language, “lybunt” is an acronym for alumnae who gave “Last Year But Unfortunately Not This Year”). It often seems more trouble than it’s worth to explain what we do to roommates and other friends, so the work and idiosyncratic social customs of the Phonathon tend to remain in the realm of our insular parallel universe.

Other than our collective need for a weekly paycheck, it wouldn’t appear from the outside that there’s a lot of common ground among the Phonathon staff. In my three-years-and-counting at Radcliffe, I’ve worked with varsity football players, women’s studies concentrators, Australian marathon runners, Theta officers, Undergraduate Council representatives and aspiring eastern European bankers. Snacktime discussions can take a little while to get going at the start of the school year, but by October you can smile conspiratorially at a whole new set of people when you pass them on the street. I was at a shift during the tragically brief few hours when it appeared that Al Gore ’69 had won Florida, and again when one of my fellow callers was rebuked for calling a recent graduate during the season finale of “Buffy the Vampire Slayer” (thanks to some clutch telephone work on the part of my caller-friend, the alumna quickly forgave her and the caller was given an update on Buffy’s ongoing campaign against the undead).

So, as absurd as it may seem to the uninitiated—and as impossible as it would have been for me to predict a few years ago—it has been Radcliffe, which used to be the women’s college here at Harvard, that has helped to define my undergraduate experience and my understanding of my university and its history. That history is still unfolding, and the shockingly imbalanced ratio of female to male tenured Harvard faculty alone makes clear that there are still miles to go before we sleep. (Only 18.3 percent of senior faculty members are women.) Yet at the same time, and informed by my knowledge of both Harvard’s and Radcliffe’s past, I am grateful to be here at a time when the Dean of the Radcliffe Institute became the first woman to sit on the University Board of Deans, when female undergrads can take for granted their ability to study in Lamont Library, and when the most unlikely of candidates—a man, for goodness sake—is allowed to become a director of the Radcliffe Student Phonathon.

John Harvard should have been so lucky.