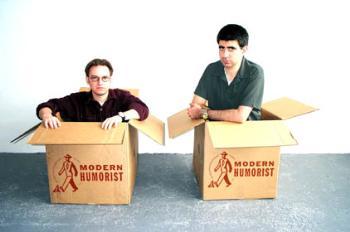 Soon after graduating, John Aboud ’95 and Michael Colton ’97 (FM’s original Gossip Guy) formed modernhumorist.com, a well-known website for purveying inventive comedy that rarely fails to offend someone. The success of the site has made recent expansion into other media possible. First there were three books: My First Presidentiary: A Scrapbook by George W. Bush, Rough Draft: Pop Culture the Way It Almost Was, and One Nation, Extra Cheese: Your Guide to the Bestest Country Ever. Following their literary success, the pair has moved into film, cutting deals to write a sports spoof called The Comebacks and to rewrite Gen CCX, a teen gladiator period comedy. They’ve also recently sold a half-hour comedy pilot to NBC based on Colton’s experience as a reporter in Washington, D.C. Despite their success in the outside media world, FM’s interview with the duo proves that Harvard references—and rivalries—die hard.

1. You are writing a teen gladiator period comedy for Fox.  How has your Harvard experience helped you write about teen gladiators?

Luckily, we both took that Historical Studies class “Aqueducts and Acne: Coming of Age in Ancient Rome.” Also, we were in the Time Travel Club (meets Wednesday nights in the Leverett JCR).

We get a lot more action when we lie and say we co-produced “The Fabulous Life of Ben and Jen.”

3. In an interview with Shift magazine, you said you only had one mountain of cocaine and you were working on getting more.  How much cocaine qualifies as a mountain?

We’re actually kind of embarrassed about that quote. Since saying that, we’ve gotten ourselves clean. Now, it’s nothing but Clif Bars and crystal meth.

4. One of you worked for The Crimson and one worked for the Lampoon.  How would you compare your relationship to that of Itchy and Scratchy?

Both of us worked for both the Lampoon and The Crimson. We also wrote for the Advocate, Demon, the Harvard Gazette, Lighthouse and that magazine that the right-wing Asian lesbians publish.

5. George W. Bush had you help write My First Presidentiary: A Scrapbook. What is The President really like?

6. How did being a Lampoon writer prepare you for your work at Modern Humorist?

7. You say that your book Rough Draft: Pop Culture the Way It Almost Was is available at all reputable booksellers.  What constitutes a reputable book seller?

One that sells not only “Garfield Hogs the Spotlight,” but also “Garfield Beefs Up.”

8.  What did you have to give up in order to get the original funding for this site?

Alfonso Soriano, Andy Pettitte and a player to be named later.

9. Your site is very internet savvy.  What is your favorite site for internet

10. What is your favorite National Lampoon movie and why?

National Lampoon’s The Hours. It’s about troubled author Virginia Woolf and her efforts to get into the nuttiest fraternity on campus.

11. You have a movie trailer cliché parody site; how long until the movie you mockingly create is optioned?

We just sold it to Revolution Studios for mid-six figures against low seven. Seann William Scott is attached to star and produce. Scott is repped by CAA and attorney David Weber.

12. You have a video of a Pikachu doll being repeatedly violated by a dog.  How much did you have to pay the dog?

You mean how much did we have to pay him to stop?

13. What feature on your site has gotten the most complaints?

Any time we mention Jesus, we get a lot of complaints. FM will probably get complaints just for printing the preceding sentence. Also because all you FM heathens are a bunch of Satan-worshipping sodomites.

14. As you’ve gotten more successful, who is the coolest person you’ve met and why?

As we were handing out fake campaign stickers at the 2000 Democratic National Convention in Los Angeles, a clearly-stoned Phillip Seymour Hoffman said, “Cool, man.”

15. What is your favorite joke?