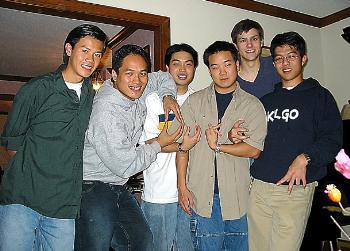 Break 'Em Off Wit a Lil' Preview of the Video

Pamela and Tommy Lee. Rodney King. Monica hugging Clinton. Videotapes can change a person’s life, and sometimes, history. Six guys at Duke found out for themselves.

On March 24, 2003, Bryan Chavez, now a junior at Duke University, approached friends Lam Nguyen and Vincent Mao, asking for assistance with a present for his then-girlfriend: an original music video to R. Kelly’s “Ignition (Remix).” “I hate to sound like something ripped out of a cheesy movie, but to be honest, all this hoopla started because of a girl,” says Chavez. Chavez rounded up Isaac Chan, John Fang, and Matt Vasievich, three other members of their crew, “6-Angst” which stands for “6 Asian Nice Guys Stickin’ Together” despite the fact that Vasievich is white, and, armed only with a metronome and the lyrics to the song, started work on their version of the video. “I thought it would be a hell of a lot more fun than writing about the hardness and carbon content of steels,” Fang says.

Little did they know that their handiwork (now located at http://www.duke.edu/~mpv4/Ignition.mpg) would become a fixture on dorm room monitors worldwide, exceeding 90,000 downloads a day at one point and reaching viewers in Asia, Africa and South America. “Duke’s Office of Information Technology sent us an e-mail saying that we were melting the servers and that they had to cap the bandwidth usage,” says Chavez.

The video follows the unassuming crew as they act out, in all of their goofy, non-thuggish glory, the song’s lines, mixing absurdly literal interpretations with entirely illogical juxtapositions.

It begins with Chavez sitting on a dorm room desk, bobbing his head and waving his arms to the remix, while Fang, Mao, and Nguyen sway arm-in-arm in the background. When Kelly croons, “You must be a football coach/The way you’ve got me playing the field,” Fang is hit in the face by a football propelled at high velocity from an unspecified source. Other highlights include Chavez downing a gallon of milk on “sippin’ on coke and rum;” Nguyen’s climbing out of a stove alongside “hot’n’fresh out tha kitchen;” Nguyen being surrounded by Doritos bags to accompany “as if the party was catered;” and all five Asians petting stuffed animals to the beat of “running her hands through my ‘fro.”

You get the idea.

Production was speedy—the entire video was designed, shot, edited and uploaded in two days—but not always easy. “The scene with the most takes was the opening one where someone had to throw a small football at John’s face and it hit him at the wrong time or the wrong place,” Mao says. And although it may be like murder she wrote once R. Kelly gets you out them clothes, providing the viewer with that illusion of 6-Angst proved difficult to coordinate. “It took us forever to do the shower scene,” says Lam. “I had to jump out at the right time so that I could cover the guys and their boxers; that way, they would look like they were totally naked. But it took me a long time to get it right.” Even worse, while Kelly sings of gettin’ it on “to the remix,” the video actors had no such aid. Mao provided the only accompaniment by singing to the beat of a metronome, making it harder to accomplish the video’s signature synchronization of the moves and the music. Finally, they enjoyed none of the seclusion that professional video shoots are entitled to. “We got a few quizzical looks from passersby,” Fang says, “when we all started whistling and pretending nothing was going on.”

None of the guys were prepared for the celebrity the video would bring them. “I never even imagined that the video would get off campus. I thought Bryan’s girlfriend would watch it and then go ‘awww!’ and that’d be it,” says Nguyen. Instead, the video spread like a virus over college networks and brought worldwide fame to their residential complex House I, whose name they spell out with their bodies at the end of the video. It has been particularly popular on Harvard servers. “A friend told me she had seen the video and that it scared her and ruined the song for her,” says Patrick B. Donovan ’03-’04. “Apparently, whenever she hears the song now, she just sees those damn kids going up and down to ‘Bounce bounce bounce bounce bounce...bounce bounce bounce.”

Chan says the group’s accomplishment merited their notoriety. “The movie was brilliantly simple and yet stunningly complex,” he says. “All we had to do was parade our big, tall white guy around in the background and surround him with shorter, crazy Asians. A movie was born.”