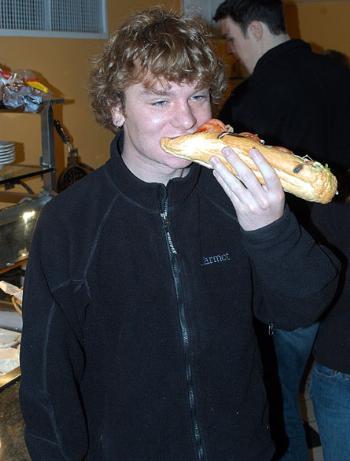 I Can Believe It's Not ’Noch's

Pinocchio’s Pizzeria has long been one of students’ favorite dining alternatives, but most Noch’s enthusiasts can’t afford to stray too
By Sara A. Slavin

Pinocchio’s Pizzeria has long been one of students’ favorite dining alternatives, but most Noch’s enthusiasts can’t afford to stray too far from their pre-paid meal plan on a regular basis. Caleb Kelly ’06 has found a solution to this timeless quandary of a boundless Noch’s appetite on a tight student’s budget. The physics concentrator from Pforzheimer House has begun duplicating Noch’s food within Harvard’s dining halls.

Kelly’s specialty—in fact the only item he currently replicates—is his version of Noch’s cheeseburger subs. The budding chef says that he got the idea when he saw someone eating a normal sandwich on a hoagie roll. “I thought it looked a lot like the kind of sandwiches they make at Noch’s,” he says.

Unlike culinary virtuosos who guard their secrets carefully, Kelly is generous about sharing his methods. He begins by obtaining a hoagie roll, and then toasting it using an actual toaster oven rather than the toasting conveyer. “Point of fact,” he explains, “this doesn’t work in the conveyor because the bun gets caught.”

Kelly cuts down on time by ordering a cheeseburger or two from the house grill while the roll is still toasting. After slathering the bun with mustard, ketchup and mayo, he cuts up the hamburgers and places them on the bun as well.  Tomato and lettuce come last.

The entire process sounds fairly simple, but Kelly admits that he runs into obstacles. Harvard’s salad bar condiments are often sub-par. “Having shredded lettuce is an uncommon advantage,” he says. “Leaf lettuce isn’t very good because you have to shred it by hand.” Kelly admits that other more serious impediments can occur, such as the grill being closed. “Or sometimes, there are adventures,” he adds, referring to a particular incident where a bun caught on fire in the toaster.

Adventures aside, the ultimate question is how Kelly’s cheeseburger subs actually compare to Noch’s. Appearance-wise, they don’t fare so well. Noch’s subs have a compact, professional appearance, with all ingredients tucked neatly into the hoagie roll. Kelly’s subs, on the other hand, are slightly messier—condiments and cheeseburger alike ooze out the sides.

Appearances can be deceiving, however. In a blind taste-test comparison, Kelly’s subs actually managed to hold their own against the real deal. Volunteer taste-taster Giulio J. Pertile ’07 was impressed with Kelly’s efforts. “There’s a bit of a difference,” he admits. “Noch’s bread was a little crispier—that tipped me off.” Sagely, the young foodie continues, “Really though, they’re both just a giant mix of stuff—and that stuff is pretty much the same.”

Observer Michael M. Grynbaum ’07 wasn’t as complimentary but gave Kelly credit for trying. He says, “Pinocchio’s has been at it for 20 years, so you know, by the time Caleb’s a senior, he’ll have it down.”

Kelly himself is quick to offer an honest assessment of his own cuisine. “I would say they’re not quite as good as Noch’s,” he admits. “But they’re free.”