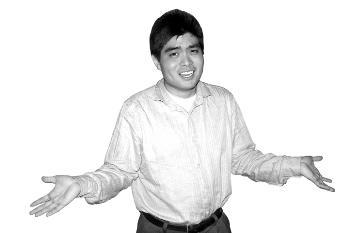 If having split personality disorder could ever be a good thing, Blaine G. Saito embodies this possibility. A self-described “mish-mash
By Jessica S. Zdeb

If having split personality disorder could ever be a good thing, Blaine G. Saito embodies this possibility. A self-described “mish-mash of pulls,” he’s constantly torn in multiple directions—culturally, intellectually, spiritually. As an Asian-American, Hawaiian convert to Judaism, Saito sees the world not in black and white, but something more akin to complementary colors, like orange and blue. For all this conflict, though, Saito manages to put his tensions to good use.

“Blaine has had one of the most interesting four year changes I’ve ever seen,” says Kevin Leong, assistant conductor of the Harvard Glee Club, a group Saito has been devoted to since freshman year. As a kid, Saito sang in a boys’ choir and played violin, but it was only here that he fully realized his connection to music. Standing outside Holden Chapel, what Saito calls the “spiritual center” of the Glee Club, he speaks of music in deeply passionate terms. “Music can produce transcendent and trance-like states, which might be why music can be unsettling,” he says. “But it can express a real connection in the language of God as well.”

Despite Harvard’s godless reputation, Saito says he has embraced faith at school. After graduating from a nominally Christian high school, Saito says he was tired of just being told to believe things—he wanted to explore. “I ended up feeling most comfortable at the place I was most afraid to enter: Hillel,” says Saito.

In particular, learning about the constant tension between self and community described in Jewish texts has spoken to Saito. “It helps mediate my Asian-Western dichotomy, the individual-centered Western thought versus the idea in Asian thought that you act because it is your part to play in the community,” Saito says. He is given to waxing metaphysical, particularly since his conversion led him to read a wide variety of philosophical texts.

Saito has mixed feelings about his native Hawaii. “I love the weather there, the warmth of people and mix of cultures, but I can’t stand that it’s a rock in the middle of the ocean and can sometimes be isolating,” he Saito, who has become at home with the wealth of interaction and contradiction Harvard has to offer.

Like many seniors, Saito’s plans for next year are not set in stone. Though a chemistry concentrator, Saito has a range of academic interests, and he has applied for a number of fellowships to study the broad history of the early 20th century—everything from the uncertainty principle to the development of a twelve-ton scale. “I don’t know what I’m going to do with my life, and it stresses me out at night, but I have some very clear passions, and hopefully I’ll be able to do something with them,” he says.

Perhaps Leong describes it best when he says, “Blaine is not afraid to be himself, or himselves, and everyone who knows him really appreciates that.”