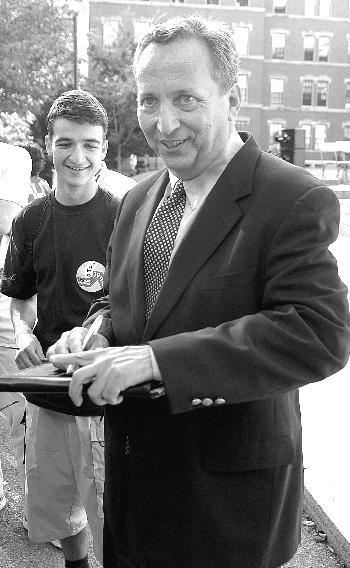 Larry Summers has always gotten by on his brains, not his beauty. But for this expert in deflation and fiscal-belt
By Jenifer L. Steinhardt and Elisabeth S. Theodore

Larry Summers has always gotten by on his brains, not his beauty.

But for this expert in deflation and fiscal-belt tightening, being the big man on campus no longer means being the largest one.

Summers’ newly svelte figure has been the talk of Harvard’s gossip circles this fall.

“A lot of people have been commenting on it,” one senior administration official gushes.

As students across campus struggle to drop the “Freshman Fifteen,” Summers has emerged as a posterboy for the latest dieting craze—which feeds pork to porkers but bans them from eating bread.

His surprisingly gaunt face stared up from coffee tables across the nation this August after the New York Times plastered a close-up across the cover of its magazine.

Stories abound across campus of the president’s dedication to his diet.

Back in September, Summers’ lean new personal assistant, Christopher C. Kim ’99, was spotted at the freshman barbecue preparing a burger for his boss—minus the bun.

On Halloween, Progressive Student Labor Movement member Emma S. Mackinnon ’05 reports, a Mass. Hall secretary turned away members of the group as they attempted to leave Summers and his top lawyer PayDay bars.

The secretary said both were on the Atkins diet.

According to published reports this summer, Bill and Hillary Clinton are on the South Beach Diet, the Atkins-rivaling low-carb plan created by a Florida cardiologist.

Summers says he and Clinton “briefly discussed diets a few months ago.” But if the former treasury secretary wants to keep off the pounds, he won’t take health advice from Clinton, a frequent McDonald’s customer during his time at the White House.

The low-carb lifestyle isn’t coming easy for Summers, a man known to scarf down two to three slices of pizza during a one-hour study break. (He once told a student, “Ask a long question, I want to eat a slice of pizza.”)

Summers described his diet as “modified Atkins” earlier this week—and modified it is.

Several Summers watchers have caught the president cheating repeatedly and flagrantly during his supposedly carb-free existence.

According to one spy in his freshman seminar on globalization, Summers averaged nine cookies per class (sugar, with chocolate in the center) during a three week random sample of seminars this semester.

And Summers ate two cookies at the first study break of the year in Currier House last month. (No pizza was served.)

Experts say cookies are a no-no for any low-carb dieter.

According to Penelope J. Greene, a visiting scholar at Harvard’s School of Public Health, cheating on a low-carb diet may present a health risk, since the diet replaces carbohydrates with foods extremely high in protein and fat.

“If you are on that kind of diet and you cheat regularly by adding more carbs, you’ll be ultra-high in fat and [also] have carbohydrates. It may be unhealthy,” Greene says.

Summers confesses that his diet has been “on and off” since he started it this summer, but claims that “the trend has been good.”

Though he passed on the stuffing during his Thanksgiving meal, he admits sheepishly that he “did indulge in a bit of birthday cake” for dessert. Summers turned 49 on Sunday.

Greene didn’t know anything about Summers’ diet (“if I had any information about any individual I wouldn’t say so”). But she confirms that Summers was not among those who responded to a Boston Globe ad seeking research subjects for her latest low-carb study.

And Greene wasn’t the only observer reluctant to comment on the President’s increasingly baggy pants.

Take this exchange with Summers appointee and slender Dean of the Faculty William C. Kirby:

The Crimson: Is Larry Summers on a diet?

The Crimson: That is to say, is he living a low-carb lifestyle?

And a similarly slim Summers spokesperson Lucie McNeil, upon hearing about this story: “Oh God. Be kind. Be gentle.”

A third Summers appointee and frequent tennis partner, Dean of the College Benedict H. Gross ’71, would only comment on the second part of Summers’ low-carb, high-tennis regimen.

“I can’t speak to his diet, but his tennis game is very strong,” says Gross of his boss.

Last spring, Summers embarrassed FM on the tennis courts after the magazine enticed him to play by repeatedly running a not-so-flattering cartoon of a pudgy, scantily-clad Summers barraged by tennis balls.

The FM tennis players have graduated. The carbs have left Mass. Hall (except when Summers’ diet is “off”).

Will they be gone long enough for Summers to enter FM’s spring swimsuit competition?

Send your swimsuit sketches to lawrence_summers@harvard.edu.