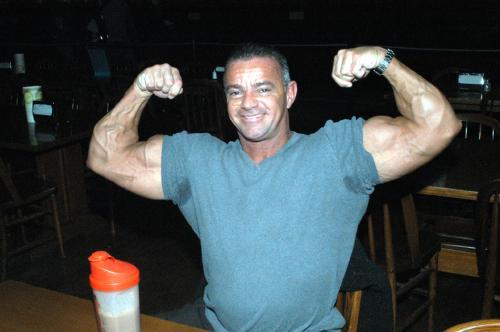 “We’ve got low-fat burgers and low-fat fries,” says Chris Pappas. “Move over, McDonald’s, cause we’ve got the low-fat Happy Meal.”

The former Harvard University Dining Services (HUDS) cook’s smile ripples like his huge biceps as he describes his vision for a chain of low-fat fast food joints. He clasps his hands over the table. “I want to go nationwide with my restaurant,” says Pappas, a three-time Mass. state bodybuilding champion and health food entrepreneur. “Florida would be nice—that state is a gold mine. So is California. Out there, it’s a mecca of health.”

So far, he’s settled for the Boston area. Lo Fat Know Fat, the budding restaurant chain that Pappas created, already has two stores in the Boston area, and one under construction. At Lo Fat Know Fat, customers can scarf down a healthy assortment of low-fat wraps, chicken sandwiches, fruit smoothies and high-protein “prolatta” shakes, all of which seem to be catching on with those fed up with grease. Pappas says it’s all good, but he particularly recommends the Bison Burger Wrap.

Unlike other health food spots, Lo Fat Know Fat delivers its meals with speed. “People want their food, and they want it right away,” Pappas says. “Our average waiting time is three minutes. Nobody’s done that yet with healthy food—until now.”

After starting his career in the food business in 1975 at a small restaurant in Harvard Square, Pappas worked at a Mexican restaurant in Framingham before coming to HUDS in 1978. Pappas has worked as a chef here for 20 years, mostly in Currier House. His wife continues to work in Cabot House.

His former co-workers have nothing but praise for him. “He was a very considerate guy,” HUDS employee Dianne Freedman says. “We had a quadriplegic girl in the House, and every time her parents came to visit, Chris would set up a special table for her and her family.”

In the late 1980s, Pappas’ passion for popcorn chicken shifted to a passion for weight lifting. He began competing in bodybuilding competitions and won his the first of three state championships in 1987.

“When I started doing competitions, I realized what food can do for you,” says Pappas. “I wanted to stay below 5 percent body fat, which is the extreme in dieting. So I said to myself, ‘How can I maintain this condition year-round?’”

Pappas began experimenting with healthy foods whenever he had the chance. Currier became the guinea pig: he made a low-fat banana cream pie, which he says the students loved. He also created what he calls Powell Muffins, low-fat, high-protein breakfast snacks.

“All the sports teams loved Chris,” recalls Cathy Marks, a HUDS employee in Currier. “The football team would come in here before a game and tell him what they could or couldn’t eat, and he would fix them up a really nice meal. He was like a personal trainer.”

Pappas’ friends at the gym began to take notice of his healthier eating habits. In 1998, a buddy asked Pappas if he would cater his meals. Pappas agreed, and his days in the self-employed restaurant business began.

Within a few weeks, Pappas was supplying assorted people with nearly 60 meals per day. For about eight months, Pappas would drive around and deliver homemade health food in the morning before his 11 a.m. shift at Harvard began. Many of his customers were gym buddies, but it wasn’t just the Arnold Schwartzeneggers of the world who craved a healthier diet. Regular Joes also wanted Pappas’ low fat offerings.

“My fridge had nothing in it but Tupperwares of food,” says Pappas. “My wife barely had any room to put her own food in.”

Around this time, Pappas was approached by Tim Kurtz, a former Gold’s Gym regional director who owned a health supplements store in Watertown. Kurtz wanted to start serving food alongside his vitamins and, in 1999, the two partnered to put the plan into action. Watertown was the site of the first Lo Fat Know Fat and, following its success, a second restaurant in Shrewsbury, Mass., was opened. A third restaurant is due in Stoughton, Mass., this summer. Pappas hopes to have 10 new restaurants within the next few years and wants to rival the big fast food chains.

“We’ve had a line out the door from day one,” Pappas says. “Lo Fat Know Fat has attracted everyone from bodybuilders to a Euro crowd, from people on Weight Watchers to the Atkins diet.”

Judging from Lo Fat Know Fat’s immediate success, there’s a high demand out there for a low fat alternative to fast food.

“With all the different diets out there, everybody is looking for that cure, that secret,” Pappas explains. “It all comes down to what you put on your plate.”

The multi-talented Pappas is also a self-taught blues guitarist. Twenty years ago, he could be found in the basement of Currier playing his guitar with long hair and a “skinny as a rail” frame, as he puts it. At age 44, he still plays his classic 1959 Fender Stratocaster.

“While I love food, my true passion is probably music,” he says. “I’ll retire back to music. Good friends, good food, good music: what more could you ask for?”

Pappas is experienced in both the worlds of low-fat cuisine and dining hall delicacies. FM took him around dinner tables in Annenberg to see how healthily Harvard’s first-years are dining.

Pappas likes the combination of steak tips and tortellini, dinner roll, salad and yogurt of the football team’s wide receiver. “Keep in mind that he’s an athlete, and he’s going to be expending a lot of energy to burn this food off,” Pappas says. He describes his essentials for healthy living succinctly: protein, vegetables and water, “PVW.” “You utilize the PVW, and then decide how many fats and carbohydrates you want to sprinkle in,” Pappas says. He advises Marynick to trade the ranch dressing on his salad for some balsamic vinaigrette. Pappas is more lenient on the topic of Marynick’s apple crisp.

Montacute has a “sensible diet” of steak tips, rice pilaf and vegetables, although Pappas would like to see a little more protein. “A piece of grilled chicken on a salad is a good thing, ladies,” Pappas tells Montacute and her friends. Pappas is realistic about the college diet: “It’s okay to go out on the weekend and do your beer and chicken wings, but come Monday, you’re back on the PVW.”

“Looks like someone’s been a naughty girl!” crows Pappas. He’s caught Falkner eating her apple crisp before the ham and ravioli. The ravioli, says Pappas, is a great treat, but riddled with sodium. Same with the ham. Despite his initial suspicion, by the end of the conversation, Falkner is in Pappas’ good graces. “She’s a sweet young girl. She deserves the apple crisp.”