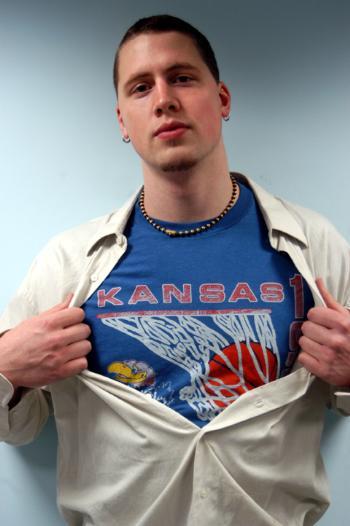 Who You Calling a Hick?

“I live in that useless patch of land between New York and California called America.” —Ned Flanders, “The Simpsons” My
By Sam A. Winter

“I live in that useless patch of land between New York and California called America.”

My career at Harvard is winding down. I only have one more semester left with which to make any sort of impact here or to have the truth machine bless me with some veritas. This endpaper is just the opportunity I am looking for. A blank palate to express my most profound thoughts on whatever topic I might possibly want. But blank sheets of paper make me nervous. Because they represent infinite possibilities. Too much freedom is almost too much pressure. It’s kind of like life. If life was like your second grade teacher told you it was, and you have infinite possibilities to do whatever you’d like, to be whatever it is you want to be, and you turn out to have a boring, waste-of-space life, then people will think you have shit for brains. It’s kind of like how when I graduate and I don’t have a job my parents will berate me for wasting the opportunities that Harvard is supposed to have granted me. So making good use of this opportunity to share my marvelous insight is important to me. Therefore I must speak on a topic that needs to be addressed.

In an environment such as Harvard, where political correctness and cultural sensitivity are all the rage, how can everyone get away with insulting the Midwest all the time? What is it with the use of Middle America as a synonym for the unenlightened? Yeah, people in the Midwest hunt and pray to Jesus Christ, but that doesn’t mean that the region is full of low-brow hicks. My experience with people at Harvard is that they apply stereotypes to the Midwest in ways that they would be outrageously offended by if the same kind of simple-minded stereotypes were applied to people of a particular race or religion or what-have-you. For shame. Everyone knows that the South is where America keeps its imbeciles. I suppose the Midwest receives a lot of flak because of the notion that its inhabitants are close minded. What irony! The people who dis my homies from the Great Plains are the close minded ones. They claim to be cultured because they have studied abroad in Italy for a semester, but they neglect to accept that the Midwest has anything to offer besides wheat, boredom and fanatic Protestantism. In my art class, the lecturer mentioned that a particular painting was located in a museum in Kansas City and people in the crowd snickered as if the idea was preposterous. “Kansas City?!?! It must have been placed next to the cow patties and the photo of Dorothy and Toto.” Take a second to think about who is really close-minded. At least people from the Midwest are able to see city slickers portrayed on television and in movies. MTV and CNN are the great equalizers. We’re watching you but you aren’t too sure about what we are up to, are you?

Eating sushi does not make you enlightened. Thinking that religious people are silly for believing in an imaginary man in the sky does not make you enlightened. What happened to the idea that cultural differences are to be respected and appreciated? That is not to say, however, that any such differences within the United States are very pronounced. The Midwest is not very different than anywhere else in the country other than the fact that its citizens are not pretentious enough to believe that it is so much better than another particular region. If you’ve ever been introduced to people in the following way, you will feel my pain: “This is Sam. He’s from Kansas, but he’s not provincial or anything.” Thankfully, I can be presented as being beyond provinciality or my new acquaintances might have confused me with the other lowly farmhands that I came to Harvard to get away from. Thankfully, I have had the opportunity to live in an environment and receive an education that has made me better than the unenlightened nincompoops of Middle America.

When I took Moral Reasoning 22, “Justice,” my sophomore year, Professor of Government Michael J. Sandel asked the students—more than 600 people in Sanders Theater—whether they would rather live on a farm in Kansas or lose one of their hands. The overwhelming majority indicated that they would rather lose a hand. I couldn’t believe it. It’s your hand! I guess the rationale is that even without one of your hands you can still do cool things like go clubbing and see foreign films. Unfortunately, you wouldn’t be able to clap at the end of Amélie, even if you really enjoyed it. And it would be hard to grope someone on the dance floor and hold your amaretto sour at the same time. There are trade-offs with everything I suppose. Personally, I don’t really want to live on a farm either, but I imagine that if Sandel’s question had been “would you rather lose a hand or live on a farm in upstate New York?” then the class’s responses would have been very different. That’s what bothers me. The assumption is that a place like Kansas is either so boring or so backwards and countrified that living there is equivalent to being sentenced to a life of blandness and simple-minded buffoonery.

I’m not trying to convince anyone that life in the Midwest is better than on the coasts. Next year I’m just as likely to end up in Boston or San Francisco than back in Kansas. I just feel like it is a shame that supposedly wise people would hold such negative opinions of a place they have never been to and know little about. I can’t, however, totally condemn those who view the Midwest as a cultural latrine. It is merely a matter of ignorance breeding snobbish contempt. I can play the Robin Williams to you all’s Will Hunting and tell you, “It’s not your fault. It’s not your fault.” It’s not your fault that your quest for cultural understanding has not brought you anywhere near Iowa, Kansas, Nebraska, Oklahoma or Missouri. Maybe we should blame these states’ departments of tourism. It’s not your fault that you don’t know anything about the Midwest beyond all the cruel stereotypes.

In order to address the great dearth of understanding regarding the Midwest, I have taken it upon myself to share a bit about my native culture so that you all will be better equipped to make accurate judgements about my brethren in the future. Hopefully, I can debunk a few misconceptions and also point out a few interesting pieces of information. The following is a guide to Midwest fact and fiction.

Fact: These types are the exception to the rule, mostly. Although, many Midwestern dining establishments operate under the implicit dictum of “No Sleeves, No Problem.” Nothing wrong with sporting a cut-off T-shirt while enjoying a night out. The most notable of these restaurants are the all-you-can-eat buffets such as Golden Corral or Sirloin Stockade, where you can actually get Kool-Aid to wash down your food. If you are looking for Midwestern flavor, start here. Buffets are a great place to people watch. A couple summers ago, when I was eating at the Golden Corral with my family, I went to the bathroom and heard this memorable exchange between two guys with mustaches and lawn mower hats.

Mustached Man 1: “Well, at least I didn’t spill racin’ fuel on my arm and burn myself again.”

Fiction: We, in the Midwest, like to marry our cousins and other blood relatives.

Fact: I would never marry any of my cousins. They’re not even good looking.

Fiction: The Midwest is not culturally diverse.

Fact: In my junior year of high school, I remember there was a big brawl in the school parking lot between some cowboy boot wearing hicks and a group of gangsta-wannabe thugs. If that’s not cultural diversity at its most potent, then I don’t know what is.

Fiction: Everyone in the Midwest is a right-wing crazy.

Fact: The truth is that only some of the people in the Midwest are right wing crazies. We have our share, but let’s not pretend like the rest of the country doesn’t have its own derelicts.

Fiction: People in Kansas live in little hamlets and/or farmhouses away from the hustle and bustle of modern cities.

Fact: We have many beautiful cities, but we also have easy access to the great outdoors that rural areas offer. It amazes me how many people assume that there are no highly populated cities in the Midwest. I’m from Topeka, which is no metropolis even by Midwest standards, but I live right near a mall and every chain restaurant imaginable. I am also a 20 minute drive from hay bails in one direction, and the ghetto in another direction. Our downtown area even has bums. That’s one of the three criteria for official status as a city: cross walks, tall buildings and bums. I was talking to a friend of mine from Berkeley, Calif., and she informed me that no one there goes fishing. I was saddened by this, but probably no more saddened than she would feel if she learned that no one in Kansas cross-dresses.

Fiction: Cow-tipping is the number one form of entertainment.

Fact: Cow-tipping? No. Getting drunk and a) playing softball, b) watching sports on TV or c) driving somewhere? Hell yes!

I like to make jokes, but seriously people, stop being so narrow-minded. Don’t buy into the stereotypes. If I have done nothing else to contribute to the cultural dialogue on campus, I only hope that folks at Harvard will think twice before they disrespect Middle America. When I graduate from Harvard, two messages will be my legacy: 1) the Midwest is a land of deserving of regard and 2) true cultural sensitivity means it is only acceptable to make fun of your own kind.