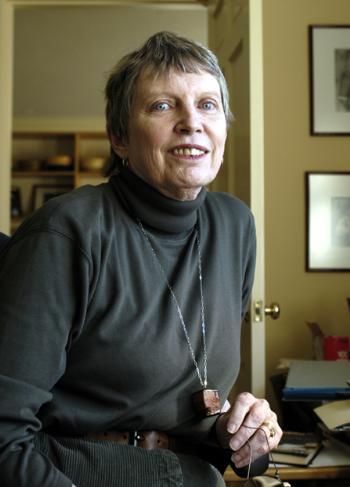 Lois Lowry Has The Answers

“Pretend you’re sitting in my living room having a cup of coffee,” says children’s author Lois Lowry to the 260-plus-person
By Julia N. Bonnheim

“Pretend you’re sitting in my living room having a cup of coffee,” says children’s author Lois Lowry to the 260-plus-person Literature and Arts A-18: “Fairy Tales” class. Lowry, who lives in Cambridge and has written over 30 books including The Giver, Number the Stars and the Anastasia series, resembles a spunky, low maintenance grandmother in her red buttondown sweater. This comforting and casual statement fits with her unassuming thoughtfulness evident as she starts to speak about her novel, Number the Stars, which the class recently studied.

But Lowry isn’t the typical assigned reading. Her schoolteacher demeanor and the subject matter harkened back to the halcyon days of fourth grade. When Fairy Tales Professor of German Literature and Language Maria Tatar announced Lowry’s guest stint, the Sackler lecture hall crowd was abuzz with nostalgic exclamations. Several weeks later when Lowry appeared to discuss her book, more than a few clever students had well worn copies of Number the Stars in hand for Lowry to sign.

Number the Stars, widely read in elementary schools, tells the story of a 10-year-old Danish girl who is instrumental in rescuing her Jewish best friend, as well as several other Jewish families, from Nazi control during World War II. Michael B. Cover ’04 remembers the book as his “first personal connection with the Holocaust. It certainly brought me close, as a child, to the experiences of another child whose faith and times were so distant from my own.”

The appeal of Number the Stars, which is still being taught in elementary schools today, has indeed spanned generations. Jordan D. Sagalowsky ’04, who read the book for the first time when he was 10, taught Number the Stars at a volunteer summer school program, to a group of “ethnically diverse kids who were intrigued because they didn’t know much of anything about that part of the world.”

But being an integral piece of school curriculum is not new to Lowry. The author’s Newberry Prize-winning novel, The Giver, about a community that, in order to end conflict, gives up colors, weather, choices and love, is read at schools throughout the world. “They read The Giver in Germany,” Lowry says, “as the beginning of their unit on World War II—the teachers use the community in the book as an example of the effects of totalitarian rule to soften the blow of upcoming lessons on their country’s own past.”

While Lowry’s literature is used in classrooms around the world, however, her work has not been immune to controversy. The Giver, imbued with political and religious implications, has also been deemed an invocation of Satan and has been banned in schools in California, Montana and Ohio. Lowry, when asked about the controversy surrounding this book, laughs and says, “I think there’s a website called ‘Lois Lowry is the antichrist.com’—I find it quite interesting.”

The occasional criticism that Lowry is doing the Devil’s work hasn’t deterred the author from continuing the story of The Giver, now the first in a trilogy. The Giver’s intentionally ambiguous ending spurred endless inquiries as to the fate of the main character, Jonas. This strong reader response inspired Lowry to make herself a t-shirt that read in large letters “Jonas Lives!” (although she was always too embarrassed to wear it). She then decided to write a second book, Gathering Blue, where Jonas shows up “obliquely as a boy with blue eyes,” says Lowry. She is currently working on the final book of the trilogy called Messenger, in which Jonas will also appear briefly.

Messenger, like The Giver, will tell the story of a dystopian community, to which people come for asylum. But a dangerous Forest—Lowry emphasizes that it is Forest with a capital “F”—surrounds the village. People can safely come through Forest into the village, but if they try to leave, Forest entangles them and “they die a hideous death,” Lowry says, adding that “I love writing gross, scary, and disgusting scenes.” The only person who can safely enter Forest is a young boy, who is the designated messenger to other villages. The book details his last trip through Forest, his mission and his courage. Lowry says that this book’s overriding theme will actually be similar to that in many of her other novels.

“All my books have journeys that take people from one place to another,” she says, “and provide them with dangerous adventures along the way.”

Lowry’s books are not all so heavy, however—after all, she is also well known for a distinctly lighter side, fondly remembered for the Anastasia series of nine books that detail the misadventures of 10- to 13-year-old Anastasia Krupnik. Lindsey D. Cameron ’05, who read the Anastasia books, says she wanted to be just like the spunky heroine. “I remember in one book, Anastasia placed a personal ad looking for a perfect husband (even though she was 12) and I thought that was so cool, so I went on AOL and put one up, and all of these people started calling my house thinking I was 19 or 20 and then one day, my nanny picked up the phone and told the callers off. She thought it was hilarious,” Cameron says.

Lowry is also skilled at assuming different ages. She has written in the voice of children who range from ages three to 17, and can easily adopt her characters’ personalities, no matter what their age. “It comes very naturally to me,” Lowry says, “When I start a book and create the protagonist and create the gender and the age, I instantly find myself inside the mind and perception of the protagonist and speaking in their voice. It’s kind of astounding even to me.”

Though most Harvard women (and any male Anastasia fans) likely left their Lowry collections at home, Cambridge is full of Anastasia landmarks. Mr. Krupnik was an English professor at Harvard and one of Anastasia’s major childhood traumas involved relocating from Cambridge to the character-less suburbs. If Anastasia didn’t stay 13 years old forever, however, Lowry speculated that she might have matriculated to the University of Hawaii (but that wouldn’t have been her choice) or more probably to Berkeley. “I would have to make it interesting,” Lowry said, “I couldn’t just send her to Vassar and have her major in English because that just wouldn’t be her. And she definitely can’t go to Harvard because her father teaches there and she wouldn’t want to go there.”

But Mr. Krupnik was not simply a professor —he was also a writer, a profession Lowry could obviously portray accurately. Mr. Krupnik would always carry around a notebook with him to record what he called “the human scene.” His habit was one that was based on Lowry’s own experience. “I do usually write things down,” Lowry says, “and many of those observations find their ways into books sometimes years later.”

The Anastasia books, while certainly silly and fun, allow girls to connect with a peer who is optimistic, even though the early teens are a difficult stage in life. “I felt like Anastasia was very similar to me,” Cameron says. “She was going through an awkward phase and I felt like that too, but she was also so quirky and odd and upbeat and I could also identify with that.”

Maya Simon ’06 also looked up to the young mischief maker. “I just thought she was really cool because even though she never listened to her parents it always worked out okay,” Simon reminisces. “I was never really good at being bad, so Anastasia was kind of a role model for me – something to aspire to. When I suggested buying gerbils and breeding them like Anastasia did in one of her books, my parents were not quite as thrilled with my choice of heroines.”

Simon continues, “Even today, Anastasia is still overwhelmingly cool. Just take a look at the cover of Anastasia Ask your Analyst, my favorite book, and you’ll see that she’s wearing Pumas, my favorite brand of shoes! Anastasia and I just connect on so many levels.”

Anastasia and her family lived, for the first two books, in Harvard Square, and then they moved to the suburbs —“probably Newton,” Lowry says. “I’ve always been kind of sad I moved them. It would have been fun to have them here.”

Her choice of setting as well as her personal location were not arbitrary, as she currently lives in Cambridge, just minutes from the Harvard campus. “Many years ago when I was married with two children my husband went to Harvard Law School and we lived in a crummy cheap apartment in Cambridge I had very fond memories of Cambridge so after my divorce, I moved back around here. I lived in Boston on Beacon Hill first and then I moved to Cambridge ten years ago. I now live about six blocks from my first shitty apartment.” Lowry says.

Lowry cites the divorce that spurred her move back to Cambridge as the beginning of her writing career. “I always wanted to write,” she muses. “I went to Brown and majored in writing, but then I got sidetracked by an early marriage—I was 19—and I had four kids by the time I was 25.” As Lowry’s marriage began to end, however, she realized that she had to support herself. She published a short story in a magazine that she told through the eyes of a child. This caught the eye of Houghton Publishers (with whom she still publishes today), who asked Lowry to write a children’s book. Lowry’s career took off from there, beginning with a book called A Summer to Die, which is about a young girl whose sister is dying of cancer. “It had never occurred to me to write children’s books but I realized that I had to make a living now that I was getting divorced, which was something I had never had to do before. After [A Summer to Die] was published and had won several awards I realized that was how I could make a living. It was very unromantic,” she laughs.

Lowry’s love of children’s writing, however, only grew from there, as she has had the unique opportunity to see the impact she makes on childrens’ lives. “The glimpse that I get into the lives of children and how they are affected by books is very meaningful to me. It shouldn’t have surprised me, though, as I was a very avid reader but perhaps I had forgotten.”

While Lowry doesn’t typically use the story ideas readers suggest to her in their letters, she admits to using combinations of their names to name some of the characters in her book. “I don’t usually want the names of the minor characters to be too uncommon,” she says, “so I usually steal names from the kids who write to me—not someone’s whole name but I’ll take the first part of a name from one letter and the last from another.”

Lowry still receives dozens of letters, although now, they are often e-mails. The letters not only include suggestions for story topics, or their useful names, but Lowry has seen that they also exhibit an intangible bond to Lowry and her books. Tatar, who invited Lowry to her “Fairy Tales” class, speculates as to why readers feel so tied to Lowry’s books, “Lowry is certainly an author who has struck a chord with readers because her books have a way of addressing childhood fears by creating monsters but then she writes in tough, resilient kids who can deal with those monsters,” Tatar says.

Lowry considers the same issue, saying, “I think the kids keep reading and keep writing because it seems that all of my books deal, essentially, with the same general theme: the importance of human connections, and that’s something that touches all of us.”