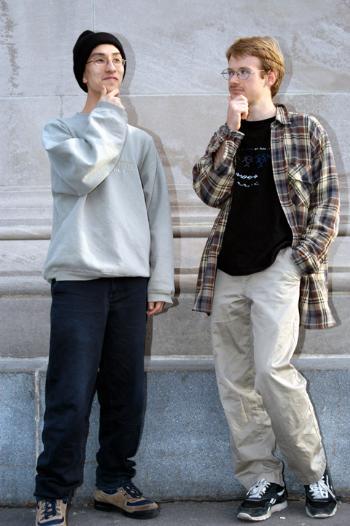 At 10:00 a.m. on a Saturday, most college students aren’t even awake yet. Yet on this morning, 71 students are
By Jannie S. Tsuei

At 10:00 a.m. on a Saturday, most college students aren’t even awake yet. Yet on this morning, 71 students are sitting in Science Center C, alert and ready to begin thinking about determinants and combinatorics. By 6 p.m., they will have pored over math problems in two three-hour sessions.

While some leave, ready to replenish their mental energies by going to bed, others think it’s all in a day’s work. Some head upstairs to the math department lounge for celebratory cookies and fruit. From then on, a certain solidarity unites them: as they walk out of the Science Center’s rotating doors, over brunch the next day, or during a chance meeting in the Yard, they will discuss the 12 problems on this year’s Putnam Mathematical Competition that they spent a whole day in December trying to solve.

Taking the Putnam is the only experience of its kind in the college world. A higher-level equivalent to high school math Olympiads, it’s funded by the estate of William Lowell Putnam, class of 1882. The 65-year-old annual competition is open to all undergraduate students enrolled at universities and colleges in the U.S. and Canada; some high school students, generally seniors also participate.

Each college with three or more participants designates three students to serve as the college’s “team.” Although team members work separately, the sum of their scores serves as the team’s score, which is then compared to the scores of other college teams. Both the top five individuals, who are designated Putnam Fellows, and the five highest-scoring teams receive cash prizes. First prize is a hefty $25,000 that goes to the math department of the winning university and $1000 for each team member—an award that went to Harvard this year.

In the past eighteen years, Harvard has placed first 14 times, a record unparalleled by any other university, even MIT and Caltech. In the other four years, Harvard consistently placed in the top five. Professor of Mathematics Noam Elkies, instructor for the intense first-year Math 55 and a three-time Putnam Fellow, ascribes this performance to the quality of the math students that matriculate at Harvard, laughing that “the people who can take the most credit for that is the admissions office.”

Alexander “Sasha” B. Schwartz ’04, a two-time Putnam Fellow from the suburbs of Philadelphia, came to Harvard for this very reason. “I knew I wanted to come since ninth grade,” Schwartz says. “It has the best undergraduate math in the country...Because the students in the class are at a high level, the students can be taught at a higher level.”

Still, the test itself in recent years has had less and less to do with math department curriculum. According to Emeritus Professor of Mathematics Andrew Gleason, a three-time winner of the Putnam and co-author of a book on the competition, the material on the examination has gotten more abstract, moving away from the material directly covered in college classes.

“The problems in the early days were very much very hard standard college course type things,” Gleason says. Now, he adds, “there are questions that would not be covered in a college course—peripherally related, but not really covered.”

Basketball certainly seems peripherally related, if at all, to math. However, the first question on the second half of this year’s exam dealt with basketball and made a sly reference to the free throw percentage of a certain L.A. Lakers center. Test-takers had to calculate the probability of “Shanille O’Keal” making 50 out of 100 given specific circumstances. “A bunch of people laughed when we started that part of the test,” says Gabriel D. Carroll ’05, three-time Putnam Fellow.

Each of the Putnam’s two sections has six math problems, with full credit for a problem netting ten points. While the number of problems may seem low to Harvard students used to taking SATs and Math 21a examinations, the majority of the test-takers don’t even receive full credit for a single problem. According to Ravi Vakil, co-author of a book on the competition from 1985-2000 and the Putnam coordinator at Stanford, the median score is usually zero or one. “Keeping in mind that the people taking the Putnam are self-selected from the smartest mathematical minds in the continent, this undoubtedly is the hardest test in the world,” Vakil writes in an e-mail. “Getting somewhere on even one problem is a real accomplishment.”

In fact, this year’s median score, a 3, was unusually high; most students interviewed agreed that the test was easier this year than in past years.

“The geometry problem was a joke,” says Michael A. Hamburg ’06, who was among the top scorers this year.

The typical Harvard student is used to acing examinations, so what kind of student puts himself (and it’s usually a him) through the agony of receiving a worse-than-failing score? Every participant FM spoke with was a math contest veteran from high school, some even at national and international levels.

Still, even though the department gets a cash prize for successful competitors, taking the Putnam is not a concentration requirement and no one is compelled to compete. They’re just there to have a good time. As Carroll says, for these students, “it’s just fun.”

George Lee ’04, a member of the winning Harvard team, agrees. “You meet people who share your sense of humor because math people have an understanding of each other’s humor,” he says.

Andrei Jorza ’05, a 2001 Putnam high-scorer, attributes Putnam participation to students’ desires to relive high school contest math memories. “I call it nostalgia of high school,” says Jorza, a two-time member of the Romanian team for the International Math Olympiad (IMO), over a fly-by meal in Loker. “Most people who went to the IMO are not very serious about [the Putnam]. When you’re doing a competition, it’s the atmosphere of people trying to solve problems in a fixed amount of time, and talking about it afterwards.”

Indeed, nearly every student, especially the math concentrators, and every professor took care to emphasize that the Putnam is no perfect measure of actual math ability. Elkies, peering through his turtle shell-rimmed glasses, explains that “beyond a point, the ability to do tricky problems without a book, fast, is less and less a part of your math. In the real world, we use references, ask our peers, use the computer.”

“Math competitions are very much like spelling bees—they’re arbitrary” Schwartz says. “[The Putnam] is just a college version of an arithmetic contest in elementary school.”

In keeping with this attitude, most students do not study for the Putnam. Though some universities give course credit for Putnam preparation, Elkies says, “As a matter of policy we don’t coach people for it.” Those who did study for it practiced with old Putnam problems, and you’ll never find “Math 14: Putnam Prep” in the course catalog.

Scoring well on the Putnam does help open doors. Many of those who scored in the top 200 recall receiving letters from government agencies—most notably, the National Security Agency—with summer internship offers specifically tied to their performance on the Putnam. Several test-takers mentioned the edge on their graduate school applications they hoped the Putnam would add. Gleason acknowledged the usefulness of performing well in that it “certainly helps people get into graduate school and with scholarships,” while reiterating that this “speed test” is a mere footnote to the impressive records of many Harvard undergraduate mathematicians.

“If that was the only thing we could say, it would be a feather in a not very impressive cap,” says Elkies.

For all these dismissals, Harvard’s eighteen-year streak of high performance is still a demonstration of the “disproportionate amount of talent” which Harvard has gathered. However, those who glory in Harvard’s record beware: more students from MIT placed in the top 500 (55 total) than from any other school. Vakil finds this phenomena telling, saying ominously, “It’s possible that Harvard’s reign might come to an end.”