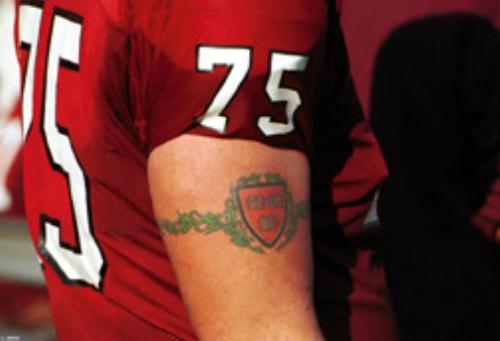 Over many a meal of sticky rice and General Wong chicken, students at Harvard have griped about what’s wrong with
By Nicholas J. Reifsnyder, Kaija-leena Romero, Amelia A. Showalter, and Michelle C. Young

Over many a meal of sticky rice and General Wong chicken, students at Harvard have griped about what’s wrong with this place. And to be sure, it’s not difficult to find things to complain about. There are mutterings about how we’re not getting the “quintessential college experience,” how students here are blinded by their ambition, how no one “hangs out” here. Then there’s the core, student-faculty interaction and the incessantly awful weather.

Ever the trend-setter, however, FM’s trying on rose-colored glasses for size to counteract the crimson-colored culture of constant complaint.

Here, we debunk three of the biggest myths about life at Harvard.

Pre-frosh, ignore anything that sophomoric sophomores or jaded juniors may tell you. Particuarly ignore the sob-stories of seniors anxious to re-live their youth. The truth is, things aren’t so bad—these heartwarming stories will prove that beyond doubt. And who doesn’t secretly love sticky rice, HUDS style?

If you want to get to know your professors, the myth goes, don’t go to Harvard. Professors here have egos the size of Harvard’s endowment; they are old, white and male and prefer shuttling between CNN appearances and hobnobbing with notables to actually speaking with their students. Unfortunately, this is too often the case. But some Harvard students, through persistence and caffeine crises, manage to beat the odds.

They had lunch about twice a week all summer, exchange e-mails regularly and bonded over her Macchiato obsession. Friends? Siblings? Roommates? No. Gina M. Bruno ’05 and Thomas Underwood, Expos preceptor, are teacher and student at a whole new level.

“I would send him these really bizarre e-mails,” she said, when asked how their friendship developed. “At three, four, five in the morning, that were progress reports, kind of, and about how many Macchiatos I’d had.”

Bruno’s academic relationship with Underwood hasn’t stuck to coffee and crisis management, however. Last summer, when Bruno acquired a grant from Phillips Brooks House Association to work develop a service project, she turned to Underwood for help in creating a poetry workshop. Together they’d go over brochures, lesson plans and teaching tips for her class.

Sarah J. Ramer ’03 first got to know Assistant Professor of East Asian Languages and Civilizations Eileen C. Chow ‘90-’91 during her sophomore year, when she took Chow’s popular lecture course on Chinese film. A year later, Ramer enrolled in Chow’s much smaller seminar on Chinese diaspora and transnationalism. Through the seminar, Ramer and Chow developed a friendly mentorship as Ramer was attempting to settle on a final project.

“I’m a figure skating fanatic, and I wanted to do my final project on Chinese national figure skaters,” says Ramer. “It was kind of a nontraditional topic, but [Chow] took it seriously, which I really appreciated.”

Chow encouraged Ramer to pursue the topic, despite Ramer’s concerns that it wasn’t academic enough.

“I realized she was someone who was extremely intelligent, extremely passionate,” recalls Chow. “She had strong convictions, but didn’t have a lot of confidence in them. In some ways, I was a student like that.”

The skating project eventually turned into Ramer’s senior thesis subject, and though Chow is officially on leave this year, she agreed to be an unofficial thesis advisor for Ramer.

Student-faculty relationships often emerge when a student takes a given professor’s class, but other campus activities can also provide venues for forging friendships. Paul E. Kwak ’03 met Lowell House Master Dorothy Austin through services and events at Memorial Church, where she preaches. The pair bonded over early morning breakfasts and scripture studies, and now enjoy a strong friendship. “She’s very special to me. Dorothy is the type of person who is so compassionate and loving. She’s kind of like my Harvard mom,” Kwak says. Through his friendship with Austin, Kwak has also become friends with Austin’s partner and Lowell House Co-Master Diana Eck.

“They’re both such brilliant people,” Kwak says. “They both really want to get to know people in the Harvard community.”

Over the summer, Marcel A. Q. LaFlamme ’04 read Public Vows, a book written by Trumbull Professor of American History Nancy Cott. LaFlamme was excited to take her fall-term limited enrollment History seminar on Men, Manhood, and Masculinity, although initially he did not get into the class. He e-mailed Cott to express his continuing interest, and eventually got in.

“Being persistent makes a difference,” Cott says. “He said his interests were so convergent with the class. I was happy to take him and he was a great member of the class.”

Next year, Cott will be a visiting professor at a graduate school in Paris. LaFlamme, who by coincidence is spending next fall in Paris, hopes to continue his academic relationship with Cott there.

Students’ attempts to forge intellectual connections with members of the faculty often result in friendships of a much broader and deeper nature.

“Academically, I’ve gotten so much, but also personally too,” Ramer says. “We talk about everything, like guys, TV, sports and careers.”

“Sarah keeps me hip,” Chow laughs. “To be able to have both an emotional and an intellectual connection with these people is really exciting.”

Occasionally, the College makes concerted efforts to bring students and faculty together. Usually, though, students bear full responsibility for taking the initiative. “You have to be the one to say ‘I’d like to have breakfast’ with you,” Kwak says. “I think it’s incumbent upon the student to make that happen.”

Often, this can be an intimidating and awkward experience for a student, especially at Harvard where many faculty members are highly venerated and famous in their fields. “You can’t be very timid,” Ramer says. “If you see a professor you’re really interested in, talk to them after lecture, go to their office hours.”

Though not all professors are so receptive to student interaction, many genuinely enjoy the company of undergraduates.

“Your teachers are more interested in you than you realize,” Chow says. “I’ve learned a lot intellectually from students. They’ll always come up with a new perspective on something that I’ve read a hundred times,” Chow says.

Cott agrees. “As a professor, you get very tied up in your discipline,” she says. “Undergrads bring ideas from wherever, and that can be really refreshing.”

Harvardians are all bookish four-eyes too busy concocting chemical formulas to do the pep rally thing. Where’s the school spirit?

School spirit is alive, well and inked on more than a few buffed Harvard bods. FM has tracked down evidence of the ultimate demonstration of pride in one’s school—these tattoos are more than just fashion statements, but emblems of team spirit and declarations of undying love for fair Harvard.

With a large letter “H” on his right biceps intertwined with ivy and the word “veritas,” Benny R. Butler ’04 says that his tattoo “symbolizes brotherhood with football and camaraderie with the team.” Reginald R. Lee ’03, who sports a block letter H colored in black and red on his shoulder blade agrees: the tattoo gave him a “larger connection with my [wrestling] teammates and the university.” Frederick E. Dewey ’03 of the Harvard men’s swimming team insists that his shield tattoo, located in a discreet location on his hip, was the product of a “completely sober decision.”

While some tattoos are the result of a pact between teammates, others follow in the footsteps of seniors on their teams. Alumni bearing Harvard tattoos include Isaiah J. Kacyvenski ’00, a starting linebacker for the Seattle Seahawks, and David Schwartz ’00 who had the Delphic torches emblazoned on his thigh. And with more members of the football team planning to get inked after the completion of Spring Ball, it looks like Harvard tattoos are here to stay.

Myth #3 :: The Core is part of a well-rounded liberal arts education

The Core Curriculum maintains that it provides all Harvard students with a balanced education. True? Well, some math and science concentrators have been complaining recently that the core is biased toward the humanities. Are these allegations fair? Are math and science concentrators really that bogged down with the useless and ephemeral knowledge that the Core forces them to learn? FM sent out a Classics concentrator, the king of all useless and impractical humanities, and told him to find two math/science seniors and quiz them on some basic humanities knowledge. The contestants are Jan M. Cieslikiewicz ’03 and Daniel J. Shevchik ’03, both applied math concentrators. “I think I know a few of these, but not through my Core classes,” Shevchik says after reading the questions. Cieslikiewicz wonders if FM would let him pose nude for a photo accompanying this quiz. But this isn’t about laying bare student bodies, but rather exposing the body of knowledge one accumulates (or doesn’t) after four years of the Core. Here’s how they did:

1) Who, according to Homer, was the best warrior at the battle for Troy?

2) In what year was the Magna Carta signed?

DS: Hamlet. I had to recite this in my high school Shakespeare class.

5) What two cities are the subject of Dickens’s “A Tale of Two Cities”?

DS: Read this one in high school, but don’t really remember: Paris and London?