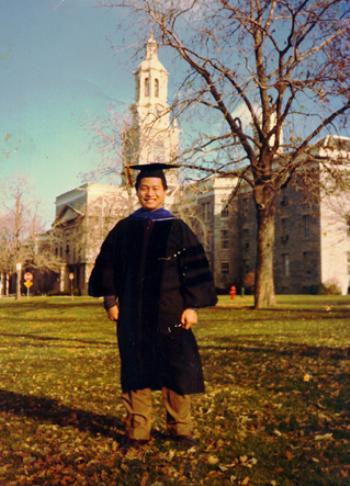 Breaking out the Bubbly

Sometimes it’s good to remember that even the most regular characters in your life still have the ability to surprise
By A.c. Marek

Sometimes it’s good to remember that even the most regular characters in your life still have the ability to surprise you.

Joseph K. “JK” Costello ’03-’04 says he learned this lesson just the other week, while perusing Louie’s Superette. During the three years he has lived in Mather House, Costello estimates that he has bought roughly 500 40-ounce beers from his favorite corner store, a habit that has become so ingrained that the man behind the counter readies his special 40-ounce-sized paper bag the moment Costello walks through the threshold. One rainy night before finals however, Costello’s regular pattern was broken when he reached to pay for his two 40s and packet of Sour Patch Kids only to be interrupted by “Louie” presenting him with a free bottle of champagne.

“He ran into the back [of the store] and grabbed a bottle of fine champagne from the South of France,” Costello says. “I was very surprised.”

60-year-old Cheng-San Chen, the man affectionately known by many students as “Louie,” says that he has been giving out free bottles of champagne to his favorite graduating customers for more than 10 years. The free bubbly is designed as a graduation gift, and Chen says that every year he instructs students to hold onto their bounty until the “big graduation day.” Unlike Costello, however, not every recipient of Chen’s complimentary champagne is a regular patron at the store; many students are chosen simply because of their conversational ability and their interest in getting to know the man behind the counter.

“My ex-wife used to tell me that my life was boring because I never drink and I never smoke,” Chen says, as he wraps his fingers on the cream colored counter. “I think my life is colorful, and I think of this store as my classroom. I want to show the students my thanks.”

Although the winners of Louie’s champagne are not organized into a cohesive group, many students say that they have special relationships with the bespectacled man at their favorite corner store. One of Louie’s chosen seniors, Michelle S. Ybarra ’03, says that her connection with Louie began before she even headed to school in Cambridge, as one of her good friends from San Antonio was roommates with Chen when he received his Ph.D. in biochemistry. Leila C. Ayachi ’03 says that her twin loves of “rock science” and weekend debauchery kept her relationship with Chen consistently strong.

“I am an aspiring rock scientist, so we always have plenty to talk about,” Ayachi explains. “I think I’m an average overachieving Harvard student that enjoys gabbing with the L-man.”

Judging from his long history of choosing favorite seniors, it seems that Chen has become an expert in handpicking overachieving students who are poised for success. According to Chen, one former recipient of a bottle of champagne now works in the Bush White House. “When he comes to visit, he always says he will put me on the schedule, so I can have a private meeting with George Bush,” Chen says.

Chen says that he will continue to surprise his favorite students with free bottles of Bouvet Brut signature champagne—valued at $13.95 a pop—through graduation. At the time this story went to press, Chen had already given out some 50 bottles of champagne, and claimed that there was no upper limit to his largesse. Although his graduation tradition can be quite expensive, Chen says that his personal life philosophy forces him to constantly keep things in perspective.

He moves out from behind the counter for a moment to point to the large collection of paper money from various countries that is taped to the off-white bulletin board behind his counter. He says he began collecting the money after his store burned down in 1993 when his first customer after the fire gave him an extra dollar bill to wish him good luck.

“I realized then that although money is important to me, it certainly isn’t everything,” Louie says, adjusting a button on the faded navy-blue sleeveless jacket that has become his virtual uniform when on the job. “What matters most to me is the respect that people have for me and seeing so many students whose dreams are about to come true.” He laughs for a moment before continuing. “And besides, if I lose all my money, I can always cash in my collection and travel around the world.”